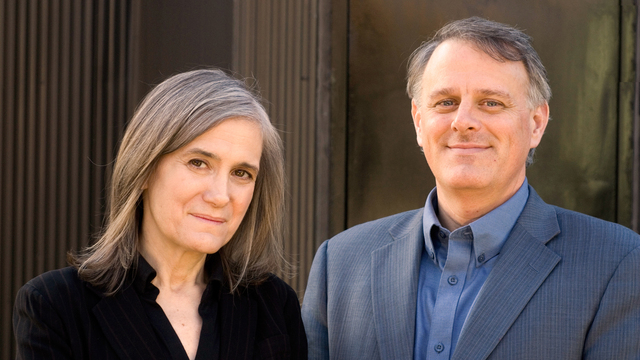 This is viewer supported news. Please do your part today.
Donate
By Amy Goodman and Denis Moynihan

On July 20, history was made in Washington, D.C., and in Havana, Cuba. As the Cuban national anthem was played, the island nation’s flag was raised over its embassy in Washington, D.C. The embassy, as well as the U.S. embassy in Havana, was open for business, for the first time in 54 years. The Washington ceremony was attended by more than 500 people. Earlier in the day, the U.S. State Department elevated the Cuban flag to a place of honor, joining 150 other national flags on display in the main lobby. While diplomatic relations have been restored, the crushing U.S. economic embargo against Cuba is still in place, and the U.S. prison at Guantanamo Bay remains open. More than 100 prisoners are still languishing there, many of them cleared for release for over a decade.

The Cuban Embassy was filled beyond capacity with Cuban and American diplomats, government officials, artists, musicians and activists. Many who gathered there had been working for this moment for decades. “It is the result of many years of struggle by many people — the Cuban people, but many friends here in this country and around the globe,” Ricardo Alarcon said at the embassy. He was a student leader during the revolution, eventually becoming Cuba’s foreign minister and president of the National Assembly, Cuba’s parliament. Now retired, he said, “It has to be recognized as a victory for us, for our people, and for all those who were opposing the U.S. policies during this half a century.”

Another historic figure, former U.S. diplomat Wayne Smith, now in his 80s, reflected: “I was third secretary of embassy in the U.S. Embassy in Havana in 1958. And I was there until we broke relations in January of 1961. So I was there when we pulled the flag down. Now here I am when we pull the flag up.” He said: “Our policy did not work. We refused to dialogue with Cuba. We tried to overthrow Castro — Bay of Pigs and all that. Then we had the embargo and a refusal to negotiate. That accomplished nothing … it was totally counterproductive.”

The U.S. policies against Cuba that Smith describes are worth recalling. Fidel Castro led a popular revolution against the corrupt, U.S.-backed dictator, Fulgencio Batista, taking power in 1959. President Dwight Eisenhower initiated the economic embargo against Cuba, then severed relations on Jan. 3, 1961. President Kennedy expanded the embargo, then launched the CIA invasion of the Bay of Pigs, intending to overthrow the Castro government. It was a military fiasco. Scores were killed, and Cuba imprisoned more than 1,200 CIA mercenaries. The Cuban missile crisis followed in October 1962, after the Soviet Union attempted to place short-range nuclear missiles on the island. This episode is widely considered the closest that nations have come to all-out nuclear war.

Sen. Patrick Leahy, D-Vt., was also at the historic ceremony Monday. The former head of the Senate Judiciary Committee has participated in secret negotiations with Cuba for years. He credited the role of Pope Francis, who acted as an intermediary between President Raul Castro and President Barack Obama, and he thanked Canada, where some of the secret talks took place. Leahy told us: “On one of my first trips to Cuba, 15 or so years ago, I went to a baseball game, a U.S. team playing in Havana. They played the Cuban national anthem and the U.S. national anthem. Everybody in there stood at attention and cheered both national anthems, including Fidel Castro. And it was very emotional. This morning, you’re standing, now on Cuban soil, in this embassy. And to see the American flag, the Cuban flag flying side by side, to hear both our national anthems, I found it very emotional and very satisfying.”

Cuban Foreign Minister Bruno Rodriguez addressed the crowd after the flag raising: “The historic events we are living today will only make sense with the removal of the economic, commercial and financial blockade, which causes so much deprivation and damage to our people; the return of occupied territory in Guantanamo; and respect for the sovereignty of Cuba.” He then went to meet Secretary of State John Kerry. Rodriguez was the first Cuban foreign minister to visit the State Department in more than half a century. Kerry is expected to go to Havana on Aug. 14 to raise the American flag over the U.S. Embassy there. It is also believed he will be making preparations for a presidential visit. If Obama goes, he will be the first sitting U.S. president to visit Cuba since Calvin Coolidge made the trip in 1928. 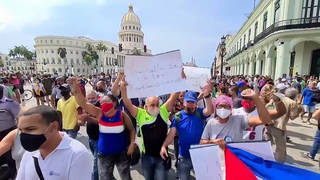