Greek voters have overwhelmingly turned down the terms of an international bailout in a historic rejection of austerity. With a margin of 61 to 39 percent, Greeks voted no to further budget cuts and tax hikes in exchange for a rescue package from European creditors. Polls had indicated a narrow vote, but the “no” side swept districts across the country. Thousands of people flocked to Athens’ Syntagma Square Sunday night in celebration. In voting against austerity, Greeks have rejected measures that helped cripple the economy, but also turned down a financial lifeline for its struggling banks. The banks will remain closed today as the European Central Bank meets to consider new emergency loans. Greek Prime Minister Alexis Tsipras says he will seek a new round of talks with creditors in which restructuring Greece’s $267 billion debt is on the table. In a surprise move, Greek Finance Minister Yanis Varoufakis announced his resignation today, saying Greece’s creditors no longer want him involved in the talks. Varoufakis said, “I shall wear the creditors’ loathing with pride.” We are joined by Costas Panayotakis, author of “Remaking Scarcity: From Capitalist Inefficiency to Economic Democracy” and professor of sociology at NYC College of Technology at CUNY.

AMY GOODMAN: We begin today’s show in Greece, where more than 60 percent of voters Sunday rejected a bailout deal proposed by international creditors that demanded harsh austerity measures, like pension cuts and tax increases, but included no debt relief. This is voter Christina Vlachaki, who joined thousands to celebrate in the streets of Athens.

CHRISTINA VLACHAKI: [translated] This is our first step to our next battle. Now it truly starts. I do not think that everything will suddenly be perfect, but it is a first step in making fear go away. Up until now, they were scaring us. Now we overcome this and move to the next stage. Slowly, we will get to the place that we deserve to be.

PRIME MINISTER ALEXIS TSIPRAS: [translated] Today, considering last week’s very difficult circumstances, you made a very brave choice. However, I am fully aware that the mandate here is not a mandate to break with Europe, but a mandate to strengthen our negotiation position to seek a viable solution. This time, the issue of debt will also be on the negotiating table.

AMY GOODMAN: Tsipras says debt talks will resume immediately with a new negotiating team. This follows a surprise resignation by Greece’s finance minister, Yanis Varoufakis, who had urged a “no” vote on the referendum and over the weekend had accused Greece’s European creditors of terrorism. Today, he wrote on his blog he had been, quote, “made aware of a certain preference by some Eurogroup participants, and assorted 'partners', for my .... 'absence' from its meetings; an idea that the Prime Minister judged to be potentially helpful to him in reaching an agreement,” Varoufakis wrote. He added, quote, “I consider it my duty to help Alexis Tsipras exploit, as he sees fit, the capital that the Greek people granted us through yesterday’s referendum. And I shall wear the creditors’ loathing with pride.” Meanwhile, German Chancellor Angela Merkel is meeting today with French President François Hollande to assess the situation, and an emergency European Union summit meeting is set for Tuesday.

For more, we’re joined by Costas Panayotakis. He is author of Remaking Scarcity: From Capitalist Inefficiency to Economic Democracy, professor of sociology at New York City’s College of Technology at CUNY. He’s just returned from Greece.

Welcome back to Democracy Now! We spoke to you last week just before the vote. The resounding “no” vote, did it surprise you?

COSTAS PANAYOTAKIS: Yeah, I think it surprised everybody, including the government. All the polls before the vote suggested that it was very close. So, I think that was a great victory for democracy in Greece. People were under immense psychological pressure from the media, that were threatening them with nightmare scenarios; from workplaces, where many business owners were threatening their workers that if a “no” prevailed, they would lose their jobs; and from the European partners, who basically were saying that a “no” vote would mean exit from the eurozone. So, it’s a very important result. It’s a hopeful development. It will not end the austerity, even if there is an agreement, but it creates a better environment for anti-austerity forces to keep fighting.

AMY GOODMAN: Well, what does it mean today?

COSTAS PANAYOTAKIS: Well, the situation in Greece is still very difficult. It is urgent, because the banks are closed, so the normality in the banking system has to be restored. As long as it is not restored, it basically will have a bad effect on the economy. And this creates lots of pressure, of course, on the Greek government, and it is consistent with a strategy of economic strangulation of—that the Europeans have used ever since the election of this new anti-austerity government.

AMY GOODMAN: Greece’s finance minister, Yanis Varoufakis, resigned today. He said his country’s resounding “no” vote means it can now ask for a fair deal from its international partners.

YANIS VAROUFAKIS: [translated] We will invite them one by one to find common ground. For example, we will see positively the fact that the International Monetary Fund a few days ago, in its honor, published a report which confirms that our debt needs restructuring.

AMY GOODMAN: So that is the—well, was the finance minister, Yanis Varoufakis. He surprised many by resigning. He posted on his blog that he was resigning because he had been “made aware of a certain preference by some Eurogroup participants, and assorted 'partners', for my .... 'absence' from its meetings,” he said, “idea that the Prime Minister judged to be potentially helpful.” What about this?

COSTAS PANAYOTAKIS: Well, there had been some talk about Varoufakis. I mean, he used to be the head of the negotiating team with the Europeans as finance minister, and he had been replaced from that role a few months ago because he was insistent on a deal that is viable. He’s not a sort of long-term politician. So he doesn’t want to just—he didn’t want to just achieve an agreement that would last a few months and would continue this kind of pattern of agreements that are made and have to be reconsidered and revisited a few months later. So that made him very, very unpopular with his partners, who are the more traditional politicians. Perhaps it was partly a stylistic issue, as well. You know, he wasn’t—you know, finance ministers in the eurozone are usually very sort of gray, sort of technocratic figures, so perhaps his style was commented on. But I think there was substantial differences, and he basically held for his position, which was substantially right.

COSTAS PANAYOTAKIS: Yes. I mean, this is in line with electoral results, including the electoral result back in January. There was a lot of—a terror campaign in the media, the media that never sort of looked very closely in the past about the sufferings of ordinary people. They were focusing relentlessly on the queues of pensioners trying to collect their pensions from the banks, and they created a kind of climate of fear. But for many young people, for most Greeks, they have lost so much already that they fear they have nothing more to lose.

AMY GOODMAN: Last week, economist Thomas Piketty, author of Capital in the Twenty-First Century, was interviewed in the German newspaper Die Zeit, saying, quote, “When I hear the Germans say [that] they maintain a very moral stance about debt and strongly believe that debts must be repaid, then I think: what a huge joke! Germany is the country that has never repaid its debts. It has no standing to lecture other nations.” In your last thoughts, your response? Thirty seconds.

COSTAS PANAYOTAKIS: I think there is a lot of hypocrisy in many—on the part of many European officials. The head of the European Commission was prime minister of Luxembourg, that thrived as a tax haven, that undercut the tax receipts of other European countries. And other countries, like the Netherlands, have also served as a tax haven. And these are countries that are oftentimes hardliners, and they point the finger to Greece. And they forget that, yes, there may be issues in Greece—there is corruption, but oftentimes the corruptors are European companies, notably German ones.

AMY GOODMAN: Professor Costas Panayotakis, thanks so much for being with us, author of Remaking Scarcity: From Capitalist Inefficiency to Economic Democracy. He’s a professor of CUNY, City University of New York, here in the city. This is Democracy Now!, democracynow.org, The War and Peace Report.

Bree Newsome: As SC Lawmakers Debate Removing Confederate Flag, Meet the Activist Who Took It Down

NEXTBree Newsome: As SC Lawmakers Debate Removing Confederate Flag, Meet the Activist Who Took It Down 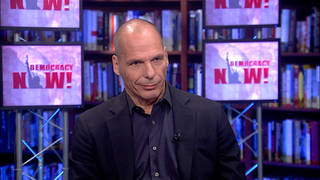