As part of the Venice Biennale, the oldest and most prestigious international art exhibition, a New York-based group, Creative Time, is hosting a three-day summit dubbed “The Curriculum.” Speakers include Afghan President Ashraf Ghani with his daughter, the artist Mariam Ghani, members of Spain’s left coalition Podemos, as well as the famed Italian political philosopher and activist Antonio Negri. We speak with organizers Anne Pasternak, the new president of Brooklyn Museum, and president and artistic director of Creative Time; and Nato Thompson, chief curator of Creative Time and author of the new book, “Seeing Power: Socially Engaged Art in the Age of Cultural Production.”

AMY GOODMAN: That’s a Detroit-based MC, Ilana Weaver, aka Invincible. This performance was a part of the 2013 Creative Time Summit, “Art, Place, and Dislocation in the 21st Century City.” This is Democracy Now!, democracynow.org, The War and Peace Report. I’m Amy Goodman. We’re broadcasting from Venice, Italy, the site of the Venice Biennale, the oldest and most prestigious international biennial art exhibition. As part of the art festival, the New York-based group Creative Time is hosting a three-day summit dubbed “The Curriculum.” Speakers include Afghan President Ashraf Ghani with his daughter, the artist Mariam Ghani, as well as the famed Italian political philosopher and activist Antonio Negri.

Anne and Nato, welcome to Democracy Now! Anne, let’s start with you. The significance of the Venice Biennale and Creative Time being here?

ANNE PASTERNAK: Well, let’s just say that this is a very rare opportunity to have artists convening from all around the world to talk about art and social change. And, you know, we often hear that artists are—they provide a mirror to our times. But actually, today’s artists are doing much more than providing a mirror, they’re actually getting into the gritty work of actual social change work. They’re working with communities, working on legislation, policy all over the world, tackling the big issues. And that’s what we’re here to discuss and to be inspired by.

AMY GOODMAN: And, Nato, if you could talk about Creative Time’s role in the Biennale? It’s the first time you’ll be holding this kind of summit.

NATO THOMPSON: It’s very unique, I mean, to have an organization like ours come in and actually do a summit here. It’s the first in the history of the Biennale itself. And so, what’s also magical about it is it’s an international exhibition, but in some ways this is an international summit. So it’s a convening around art and politics, but with the players around the globe to actually use the venue as a space to discuss and think.

AMY GOODMAN: You know, it’s interesting, Anne. You’ve been with Creative Time for what? More than two decades?

AMY GOODMAN: And yet, now you’re going to a brick-and-mortar institution, and you’re making some history yourself as a woman going to the Brooklyn Museum.

ANNE PASTERNAK: You know, it’s very exciting. The Brooklyn Museum has a long history of not only artistic excellence and having an encyclopedic, global collection, but also really standing up for things that we believe in at Creative Time. Artists should have opportunities to experiment, that our cultural institutions and our public spaces are the places for the free exchange of ideas, places for democracy to be enacted. So I’m looking forward to going to a museum, having a collection to work with, but also to think about how we can think of the museum as a place of true democracy.

AMY GOODMAN: And the people that are coming for this Creative Time Summit, Nato, talk about what went into the thinking of bringing them together. You’ve got the president of Afghanistan. You’ve got this leading radical philosopher.

NATO THOMPSON: Well so, it’s a kind of complex algorithm, in the sense that you have grassroots activists who kind of are skeptical of famous people, but you’ve also got people in political positions. We also have the cultural minister from the Spanish left-wing organization Podemos, who’s come into power. So we have politicians, we have academics. Some are very theory-heavy. But also we have people that are in the kind of trenches, who no one would know their name, but they’re doing the hard work. And we think that that is the kind of spectrum of radical politics we want in one room. And so, that is the thinking. And also, geographically spread, so you have Africa, you have South Africa, you have Argentina, you have the United States, you have Western Europe. It’s a big globe. But we think it’s important to have that kind of spectrum here in one room, and it’s exciting.

AMY GOODMAN: So, Anne, if you’d talk about—in the United States, it’s, you know, controversial to have arts funded. There’s a big battle with conservatives. Yet here you have, in Italy, the Venice Biennale—it is over a hundred years old—countries coming together from all over the world. But you also have repressive regimes. They have pavilions. You have governments like Iceland that just had their pavilion shut down by the Venetian authorities because the artist they commissioned turned the church that they were given as their space—it was a church that hadn’t been used in 40 years—into a mosque.

ANNE PASTERNAK: Right. You know, the truth is, is that people often think about art in terms of beauty. And it’s wonderful when we can go into a museum and see, let’s say, a Bellini, which I saw this morning at the Museo Correr—a beautiful Bellini of the Christ ascending, and the putti are holding him up out of his tomb, and they’re in utter agony—agony—as they’re looking at their—you know, their dead savior. And it’s a beautiful painting, and we think about beauty. But we also have to think about the actual emotions of the death of the savior, right? And the agony of Christ. And so, the artists are not only always dealing with beauty; they’re dealing with the very real issues of our time. And they are freethinkers. They’re seeing the world. They are our mirror, and we need them to be free. And sometimes the things that they communicate and that we experience are going to be very difficult and very painful. And that’s absolutely appropriate.

AMY GOODMAN: Interestingly, the Guggenheim has come up. The Gulf Labor committee that is part of the Venice Biennale talked about the Guggenheim and what’s happening with the labor force that’s building it in Abu Dhabi. You’ve signed onto the petition around the Guggenheim?

ANNE PASTERNAK: I’ve signed onto the fact that artists should have, and academics should have, free range of movement to come in and out of these regions and to speak freely. You know, Creative Time has always been a proponent of free expression. And, you know, these are inevitable consequences and difficulties that we have as the art world has become truly global and the art market has become truly global, as we see here in the Venice Biennale, that there are going to be conflicting traditions and economies and histories that we have to come together and work through. And we have to listen very carefully and respect people’s rights, their basic human rights, and work together to produce change.

NATO THOMPSON: Sure. So we live in an incredible era where this sort of confluence of art and activism is very evident in all our social movements, from Occupy Wall Street to the Arab Spring. It’s not something that’s over here and over here; they’re really mixed. And with that comes a lot of tensions and complexities. And the book is a kind of thinking through that in this particular age we’re in.

AMY GOODMAN: I want to thank you both for being with us, Nato Thompson and Anne Pasternak of Creative Time, though Anne is going to become president of the Brooklyn Museum.

And that does it for our broadcast. A very special thanks to our team here: to Denis Moynihan, John Hamilton, Mike Burke, Amy Littlefield, also to Renée Feltz and Nermeen Shaikh and the whole team in New York that made this broadcast possible. Special thanks to Julie Crosby. I’m Amy Goodman in Venice, Italy. Thanks for joining us. 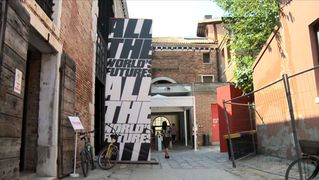