The award-winning film “La Jaula de Oro,” or “The Golden Dream,” directed by Diego Quemada-Díez, tells the story of two Guatemalan kids and one indigenous Tzotzil boy from southern Mexico as they attempt to traverse Mexico and the U.S.-Mexico border to reach the United States. The film is based on interviews Quemada-Díez conducted over six years in Mexico with hundreds of Central Americans and Mexicans attempting to migrate to the United States. The film is currently in theaters in Los Angeles and New York. We speak with filmmaker Diego Quemada-Díez.

JUAN GONZÁLEZ: We end today’s show with an award-winning film called La Jaula de Oro, or The Golden Dream, directed by Diego Quemada-Díez. The film tells the story of two Guatemalan kids and one indigenous Tzotzil boy from southern Mexico who are attempting to traverse Mexico and the U.S.-Mexico border to reach the United States. The film is based on interviews Diego conducted over six years in Mexico with hundreds of Central Americans and Mexicans attempting to migrate to the United States.

AMY GOODMAN: Last week, we sat down with the filmmaker, Diego Quemada-Díez, while he was here in New York for the film’s release. I started by asking him how he decided to make the film.

DIEGO QUEMADA-DÍEZ: Well, I was doing a documentary in Mazatlán, in Sinaloa, in Mexico, and I became very good friends with a taxi driver, and he invited me to live at his home. This was back in—at the end of 2002. And his home with his family was by the railroad tracks. So every day the train would arrive, and we would give them food and water, and they all told us their stories. And they asked us to tell others. So, I felt that they were heroes, that they were very brave people that were sacrificing their lives, because many of them die in the journey trying. And I felt their story had to be told to others, and to do it in a sort of epic poem, like if—like making them heroes.

So, through the years, I gathered over 600 testimonies from women, children and men. I was hanging out—well, going to shelters in the border, shelters along the journey in Mexico, also in the communities in Guatemala. And also I went to prisons and shelters for kids here in the United States. And then I concentrated all the testimonies in four kids, and—in order to talk about also what kind of opportunities that we’re giving to our young kids and what kind of world that we’re giving them to realize their dreams. And, yeah, I wanted to talk about how it doesn’t make any sense to do this policy of militarization of the borders and the criminalization of migrants and the incarceration of migrants, which in the United States is around half a million people, whose only crime was to cross a border.

AMY GOODMAN: Can you set up this clip for us? This is a clip from La Jaula de Oro, which means The Golden Dream or The Golden Cage.

DIEGO QUEMADA-DÍEZ: So, in this scene, what happened is that I try to take all the elements from each of the testimonies. I couldn’t put them all, but one them that really shocked me was this girl that told me that in order to start the journey, her mother cut her hair, put this band around her breasts and dressed her like a boy in order to survive this journey, in order not to be raped. And eventually, they never arrive. But she told me that story, and another woman told me, you know, “I will take the birth control pill, because we know we’re going to get raped, or we know we’re going to have to have sexual relationships with immigration officers or different people on the way in order to—as a passport.” So the girl at the beginning of the film gets dressed as a boy, cuts her hair and takes the pill. So it’s like she’s getting ready for—in a way, for this journey that she already knows what’s going to be.

So when—another story that another migrant told me is that the train—they stopped the train. They brought down everyone. They put them in a line. And then these guys were passing by, and they were just taking the girls out of the line, and they were putting them in a trunk—in a truck. And then they would take them away, and that’s the end of the story, in a way, because I wanted to create a big shock, to really feel what it is like to lose someone.

And in general, with the film, just we go with very—this very anonymous news. You know, like when we played the film in Italy, in Ferrara, at the Internazionale film festival, there were a lot of journalists there. And the day we played the film, 350—it was the day that in Lampedusa 350 died in the boat. And everyone was so shocked, you know, and we talked for like four hours. And they were saying, you know, like, by giving a face to this anonymous news—there are just numbers, and people are just getting used to it—then the impact is much bigger. So that’s the idea behind it.

MAN WITH MACHETE: [played by Luis Alberti, translated] You. Come here. This one is a female. Let’s check. Of course! Take a look, boss. You thought we were idiots, right? Take it easy. Everything is going to be fine. Don’t move. Look at this. She must be a virgin.

AMY GOODMAN: That is a clip from La Jaula de Oro, the director, Diego Quemada-Díez. It’s playing tonight at Village East Cinema in New York and Cinépolis Pico Rivera in East Los Angeles. If you want to see the whole interview, you can go to democracynow.org.

Extended Interview with Director Diego Quemada-Diéz on “La Jaula de Oro” and Migration to the U.S. 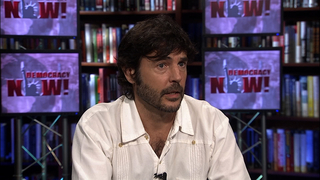 Extended Interview with Director Diego Quemada-Diéz on “La Jaula de Oro” and Migration to the U.S.