In July, presidential candidate Martin O’Malley made headlines by suggesting that the rise of the so-called Islamic State came about in part because of the effects of climate change. “One of the things that preceded the failure of the nation-state of Syria and the rise of ISIS was the effect of climate change and the mega-drought that affected that region, wiped out farmers, drove people to cities, created a humanitarian crisis. It created the symptoms, or, rather, the conditions, of extreme poverty, that has led now to the rise of ISIL and this extreme violence.” Republican Party Chair Reince Priebus called the remarks “absurd.” We get O’Malley’s response.

Web ExclusiveMay 16, 2016Chomsky: Today’s GOP is a Candidate for Most Dangerous Organization in Human History—Part 2

AMY GOODMAN: In July, you made headlines, suggesting the rise of the so-called Islamic State came about in part because of the effects of climate change. Martin O’Malley was speaking on Bloomberg TV.

MARTIN O’MALLEY: One of the things that preceded the failure of the nation-state of Syria and the rise of ISIS was the effect of climate change and the mega-drought that affected that region, wiped out farmers, drove people to cities, created a humanitarian crisis. It created the symptoms, or, rather, the conditions, of extreme poverty, that has led now to the rise of ISIL and this extreme violence.

AMY GOODMAN: That’s Martin O’Malley on Bloomberg TV. He was derided by conservatives for that statement. Republican Party Chair Reince Priebus called the remarks “absurd,” but some climate experts have said that his comments aren’t so far-fetched. Can you explain by—what you meant by the connection between ISIS and climate change?

MARTIN O’MALLEY: Sure. And it was not only climate activists that backed me up on it, it was some of our best minds and best analysts in the Defense Department. There was a tremendous drought that hit Syria a number of years ago that drove people off farms into cities. Their government could not take care of the basic needs of families in those conditions. Civil war rose up as a result of protest and repression, and then that led to the civil war and then the vacuum to led to ISIS. So these are the cascading effects that happen in a world that’s very, very connected and in a world where climate change is now creating extreme weather conditions, prolonged droughts.

And we need to become better, as a country, at looking over the horizon, anticipating these threats and forging new alliances with like-minded nations around the world to reduce the threat before we’re backed into a corner, where it seems the only options we have before us are military boots on the ground or not. What we need to do is to lead nations in reducing the destabilizing effects of climate change, extreme drought. What we need to do is join with like-minded nations to combat the threats to humanity that come from pandemic. I mean, these are the ways that we can lead in this world in a moral way. We should not be solely reliant on our military strength, however formidable. A great nation is defined by what it does not in times of war, but what it does to forge and wage peace.

JUAN GONZÁLEZ: Governor, I wanted to ask you—both Bernie Sanders, yourself and the Green Party candidate, Jill Stein, have all said that you’re not going to be accepting contributions from fossil fuel companies. Hillary Clinton has not made—

MARTIN O’MALLEY: Not that they were tripping over themselves to give them to me.

JUAN GONZÁLEZ: —not made a response, not responded so far. Now we have the report of the UC Davis system divesting itself from—for its pension funds and its endowments from coal. The reason why you made that decision not to accept the contributions, and your response to the latest UC Davis decision? I mean UC, California system.

MARTIN O’MALLEY: Yeah, and I think you’ll probably see other—other universities following. I am the first candidate in our party—and let us hope not the last—to advance a plan to move us to a 100 percent clean electric grid by 2050. As governor of my own state, we were one of the early states to join the Regional Greenhouse Gas Initiative of Northeastern states. We raised our renewable portfolio standard from 7 percent to 20 percent, passed a climate—a greenhouse gas reduction bill in our state. And I believe that this is the greatest business and job creation opportunity to come to the United States in a hundred years. We need to embrace it and move forward with clean design, green buildings, living buildings. And you’re already seeing some states move out ahead of others. In Iowa, 30 percent of their energy now comes from wind, and that’s a development just over the last 10 years. And it employs 4,000 people in Iowa.

AMY GOODMAN: What else would you do to promote sustainability?

MARTIN O’MALLEY: To promote sustainability in terms of our energy supply or around the world?

AMY GOODMAN: In terms of our energy supply here.

AMY GOODMAN: How far would you be willing to go, given, what—I think this year is the hottest year the planet has ever experienced?

MARTIN O’MALLEY: Yeah, we need to go as far as possible, as fast as possible. And we need to be open and transparent, and measure the actions that we’re taking, so that all of us together as a people can see whether the things we’re doing are working to deliver the desired results. And we’ve never been in a better position as a human species to connect the best intelligence, the best thinking, and—in order to get this done. So I’m in favor, for starters, of greatly extending the investor tax credits for renewable energy production and creation. We need to encourage states to decouple the consumption motive from the profit motive in their regulation of their own utilities, so that we can move to this distributed energy generation future, instead of the—the past, where everything had to happen at one plant and then was distributed. We need to make it easier, not harder, for people to put solar panels on their own homes. We need to seed a whole new generation in our built environment, in terms of buildings that produce more energy than they consume.

AMY GOODMAN: Your position on the Keystone XL pipeline?

MARTIN O’MALLEY: I’m opposed to the Keystone pipeline. I am opposed to Arctic drilling. I am opposed to offshore drilling off the Chesapeake Bay, and have said so. I think we should be building the vertebrate, the infrastructure, that allows us to tie up wind farms off the East Coast, not drill for oil.

JUAN GONZÁLEZ: You hold many of these progressive positions, yet in the polls Bernie Sanders seems to be sucking up, supposedly, in the polls, all the support of the active Democratic Party progressives at this point. How would you differentiate yourself from Bernie Sanders? And what would you say to convince voters that you are a better alternative within the Democratic Party?

MARTIN O’MALLEY: Yeah, the key phrase in your question is “at this point.” History is full of examples where the candidate who is peaking in the summer is not the candidate who surprises and emerges on caucus night.

So, the greatest differentiating fact between myself and really all of the candidates in the race is that while many of our candidates will make progressive promises, I’ve actually accomplished progressive things, not by following the polls and waiting for the consensus to develop, but by forging a new consensus. That’s what I did in Baltimore when we had allowed ourselves to become the most violent, addicted and abandoned city in America, and then went on to achieve one of—the biggest reduction in Part I crime of any major city in America. That’s what I did when we made our state the first state to pass a living wage law. That’s what we did when we raised our minority and women’s business participation goals, in a recession, to the highest in the country and exceeded them. That’s what I did when we passed the DREAM Act, when we passed marriage equality and when we passed comprehensive gun safety legislation that required background checks for the purchase of guns in our state. None of those things happened by themselves. They required new leadership and the forging of a new consensus and a fearlessness in putting the case to the people. And that’s what I have done, and I’ve done it more so than any of the other candidates in this race. 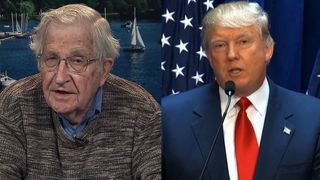 Chomsky: Today’s GOP is a Candidate for Most Dangerous Organization in Human History—Part 2