As the European Union has proposed a new plan to resettle 160,000 refugees across the bloc, we speak to Democratic presidential candidate Martin O’Malley about his call to welcome 65,000 Syrian refugees to the United States — far higher than the 1,500 allowed in so far by the Obama administration. O’Malley also discusses his overall plan for immigration reform.

MARTIN O’MALLEY: Sure, and thank you. Juan, I believe that our country is made stronger in every generation by the arrival of new American immigrants. In my great-grandparents’ day, there were a lot of Germans and there were a lot of Irish. And in our day, there are a lot of new American immigrants who are coming from our own hemisphere—and others, actually. I think the largest numbers are China, of late. So, the bottom line is this: The enduring symbol of our country is not barbed-wire fences, not chain-link fences, not internment camps for women and children; the enduring symbol of our country is the Statue of Liberty.

And we do best as a nation, and we are most credible in the exercise of our foreign policy, when we act in accordance with our deepest principles. And one of those principles, especially in the context that we’re seeing, the suffering in Syria and the refugee families fleeing with their children, little bodies washing up on the beaches, we need to step up. And I am the only candidate in this race, in either party, that has said that we should accept 65,000 refugees from Syria and step up and do our part in this crisis. I mean, one of the abiding truths of every great world religion is that you shall be kind to strangers, especially when they’re fleeing with their—for their lives and with their children. So, we are a great and a generous, and we are a good and compassionate nation. And the truth can damn well defend herself, but she needs to be stated first, and then the American people will rally to their true selves.

AMY GOODMAN: This issue of Syrian refugees coming to the United States, we did a whole show on this yesterday, talking to people all over, from Macedonia to a parliamentarian in Germany, who was saying we have to look at the countries that they are fleeing from, and look at the weapons that are being sold that are creating the strife that’s leading them out of their countries—the leading weapons manufacturers, the United States, Germany. We have to look at war. What is your position on the issue of—for example, going back in time, were you for the invasion of Iraq?

MARTIN O’MALLEY: No, I was opposed to it. In fact—in fact, I said that it’s going to open up or stir up a hornets’ nest, and we are not prepared for the second and tertiary cascading effects of it. Some of them, we’re still seeing now. I think the second war in Iraq will be looked upon as one of the biggest blunders in modern American history. We were falsely led into war by George W. Bush and others in power at the time, and we need to learn from those mistakes. 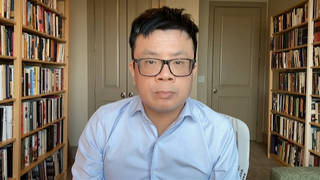