Former Black Panther Mumia Abu-Jamal calls from prison to discuss mass incarceration under Obama, being denied hepatitis C treatment, and the 50th anniversary of the Black Panther Party and its Ten-Point Platform. “It will shock you to see what hasn’t changed,” he says.

Abu-Jamal is an award-winning journalist whose writing from his prison cell has reached a worldwide audience through his Prison Radio commentaries and many books. He was convicted of the 1981 murder of Philadelphia police officer Daniel Faulkner, but has always maintained his innocence. Amnesty International has found he was deprived of a fair trial. He is currently held at SCI-Mahanoy state prison in Frackville, Pennsylvania.

AMY GOODMAN: We are joined right now by Mumia Abu-Jamal, who just called in from prison in Pennsylvania. Mumia, we did not expect this call. [Can you talk about your thoughts right now on the election, as you watch behind bars in this very unusual 2016 electoral season?]

MUMIA ABU-JAMAL: Well, you have to admit, against your better judgment perhaps, but it’s damn good entertainment. And it’s unbelievable. I mean, this is the ultimate reality show. It’s so real, it’s unreal. I think it reflects, clearer than anything we could have imagined, the fall of empire. And, you know, this is how democracies fall. History repeats itself, first time as tragedy, second time as farce. So, it’s—it’s interesting. It’s entertaining. It’s unbelievable. Yet here we are.

AMY GOODMAN: The last time we had you on, Mumia, a federal judge denied a request for you to get life-saving medication that could cure your hepatitis C. Can you talk about your health right now and what’s happening?

MUMIA ABU-JAMAL: Well, I’m—this is one of my itchy days. So, despite taking anti-itch medication, the itchiness has reflared. And so, it’s not a—not a good day. It’s not a comfortable day. We kind of got a situation where the judge, I think, performed a Solomonic act in breaking the baby in half. The judge did rule that the protocol of the Pennsylvania Department of Corrections was unconstitutional and a violation of the Constitution and deliberate indifference to the medical needs of at least 6,000 people in Pennsylvania prisons. He reasoned also that I had sued DOC officials, and that was a violation of what he called sovereign immunity. We respectfully disagreed.

But he said what we should have sued was something called the Hepatitis C Care Committee. The fact is, until we had our hearing, we didn’t know such a committee existed. So, it would have been kind of magical to kind of stop the hearing and say, “OK, what are the names of the people of this committee? We want a real—you know, refile against them.” Because we learned about it on perhaps the third or the fourth day of our temporary restraining order hearing. Yet, our lawyers, being very apt and very able, Brett Grote and Bob Boyle, refiled against the Hepatitis C Care Committee, but also refiled against the DOC offendants—defendants, because they had an opportunity, as administrators and healthcare officials, to say, “No, treat this man.” They said, “No, go by the protocol.” And the protocol, that was declared unconstitutional on August 31st, is still the one in place as of today. So it’s still unconstitutional.

AMY GOODMAN: Mumia Abu-Jamal, mass incarceration is a major issue in this country today. I just came from the premiere of the documentary by Ava DuVernay called 13th about the 13th Amendment, slavery of 1865 and mass incarceration today. Your thoughts behind bars?

MUMIA ABU-JAMAL: Well, it is—remember I talked about tragedy and farce a few moments ago? It is a tragedy that we’re now counting down the days of the first African-American—accent on “African”—president in the history of the United States, and when he leaves, you will still have the greatest incarcerator on Earth at work, and growing and continuing to divest and destroy and diminish the lives of millions of people. The fact that you could have a black presidency and not put a dent in that hellhole is startling, is tragedy, you know, on a grand stage. The biggest—

AMY GOODMAN: President—and yet President Obama went—is the first sitting president to go into a prison.

MUMIA ABU-JAMAL: Yeah, he went into a prison that was empty, because all of the prisoners were emptied from their cells. So he walked into a prison block—yes, that’s true, and it’s historic—but it’s also true that he walked in an empty prison block. If you have the greatest incarceration on Earth in this nation, then, you know, why don’t you make history by attacking not empty cells, but creating empty cells by freeing people? And it is a tragedy, because if you think one of the architects, or at least a great mind that help the architect—and I speak now of William Jefferson Clinton—if you think that her—his wife will destroy what he is proud of—right?—then you’re tripping. I mean, this is not—this is not a good time to be black in America, and not just because of people walking while black, driving while black, running while black, breathing while black, but because of all of the hells that people suffer all across America. And the truth of the matter is it ain’t getting sweeter, it ain’t getting better.

AMY GOODMAN: Mumia, it’s the 50th anniversary of the founding of the Black Panthers in just a few weeks. Your comments on this, as a former Black Panther yourself?

MUMIA ABU-JAMAL: I am happy to announce that we are republishing We Want Freedom: A Life in the Black Panther Party, by a publisher, a new publisher, called Common Notions of Brooklyn. It’s a book that I’m really proudest of, because it tells the story of the Black Panther Party, warts and all, criticisms and all, personal and political. And I think that in an age where Black Lives Matter is the greatest and biggest civil rights movement in decades, it’s time for people to learn from that movement its high points, its low points, its mistakes and its successes, because if you read the Ten-Point Program that Bobby Seale and Huey P. Newton wrote in October 1966, it will startle you. It will shock you to see what hasn’t changed in 50 years. To quote Young Jeezy, the rapper, “We’re still living in hell.” And so we must change this reality. And that work continues for all of us. 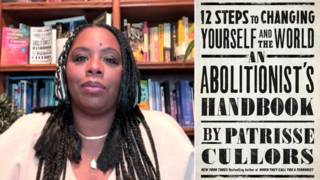