As Greenpeace recently reported that the number of pollution deaths in India is higher than in China and as the country struggles through a second year of drought, we look at the impact of climate change on developing nations and their role in pushing developed countries to meet their targets for reduced emissions and for spending on adaptation. We speak with Dipti Bhatnagar, a climate justice and energy coordinator at Friends of the Earth International who is based in Mozambique, and with Vidya Venkat, senior assistant editor at The Hindu.

AMY GOODMAN: This is Democracy Now!, democracynow.org, The War and Peace Report. I’m Amy Goodman. We’re broadcasting from the COP 22, the U.N. climate summit here in Marrakech, Morocco. I’m Amy Goodman. In what’s seen by some as a direct response to the election of Donald Trump and his rejection of climate science, nearly 200 nations have agreed on a proclamation here in Marrakech declaring implementation of the Paris climate accord to be a, quote, “urgent duty.” This comes just over a week after Donald Trump was elected president. He’s vowed to pull the United States out of the Paris Agreement and has called climate change a Chinese hoax. Trump will soon become the only world leader who doesn’t believe in climate change.

We’re joined now by two guests. Dipti Bhatnagar is the climate justice and energy coordinator at Friends of the Earth International, based in Mozambique. And Vidya Venkat is the senior assistant editor at The Hindu, based in India. Her most recent piece, “Marrakech Action Proclamation Sends Out Strong Signal on Climate.”

We welcome you both to Democracy Now! Dipti, let’s begin with you. As the summit wraps up, what has been accomplished here?

DIPTI BHATNAGAR: So I think there’s been a shadow cast over this entire two weeks of COP 22 here in Marrakech with the president—President-elect Trump being elected in the U.S. And I think that the global community here has really come together to give a strong response to that. We’ve seen the countries step up and say that they will—they are still in, they will move forward. But what we haven’t seen here is those words being turned into action. And that has, I think, been the unfortunate bit here at COP 22, because what we really needed to see here was a ramping up of ambition, a ramping up of the targets that the developed countries, especially, put on the table in Paris last year, because those were absolutely not enough to stay under 1.5 degrees C.

AMY GOODMAN: The Obama administration is in power for another two months. What do you want to see in this period?

AMY GOODMAN: He was just here.

DIPTI BHATNAGAR: —when he presented—when he spoke at the press conference the other day, really committing that the U.S. has taken some steps forward, and those cannot be reversed. And I think those are really strong words. Now it’s time really for the U.S. to turn those into action, because the U.S. was one of the developed countries which was not meeting its fair share of targets. It did not pledge enough based on what its fair share historically and currently should be. And I think one of the things that we would like to see from President Obama and from the other developed countries—this isn’t only about the U.S.; this is about all of the developed countries really needing to step up their emissions reductions targets and finance, because, without that, the energy transformation in our countries in the South is going to be very, very difficult. And that’s what’s needed to stop this climate catastrophe.

AMY GOODMAN: Vidya Venkat, talk about what you’re covering here. You’re coming from a country—do you live in New Delhi?

VIDYA VENKAT: No, I live in Chennai.

AMY GOODMAN: Talk, though, about New Delhi and what’s happening, the reports we’re getting of the level of air pollution off the charts.

VIDYA VENKAT: OK. Well, basically, my focus of coverage at COP 22 is not just India, but I’m looking at the global reactions coming in, because in the true spirit of the Paris Agreement, everyone is supposed to get together and act on climate change. So I guess it’s a bit unfair if you focus on just one country.

But I also think that Delhi, being the capital, gets a disproportionate amount of attention in the press. Climate change has had a severe impact in India. The drought for the last two years, consecutive years of poor rainfall, has meant that a huge amount of people have been affected by it, especially farmers. In fact, the numbers run into something like 330 million people affected by drought. So that’s a much larger number. And I genuinely feel that the issue of agriculture and farmers being affected—and I’m told that agriculture has been dropped from the Paris, you know, negotiations here at Marrakech. So, concerns about agriculture, concerns about adaptation—how do countries like ours, which are affected by climate change, adapt to this? They have not been addressed.

AMY GOODMAN: Your response to Donald Trump’s election? Could be the first major world leader to deny climate change.

VIDYA VENKAT: Well, I really feel that, given all the scientific evidence that exists, if a world leader denies it doesn’t exist, then there’s something really wrong with him, because, I mean, as journalists, we have been putting out one story after the other—the glaciers retreating, for example, in India. I mean, I traveled to Gangotri in May, which is the source of the Ganges River, and the glacier has retreated by three kilometers. And that’s massive. And that’s evidence in front of you, so—

AMY GOODMAN: Well, I want to thank you both for being with us, Vidya Venkat, senior assistant editor at The Hindu, as well as Dipti Bhatnagar, who is climate justice and energy coordinator at Friends of the Earth International, based in Mozambique.

NEXTMarshall Islands Poet to U.N. Climate Summit: At 2 Degrees, My Islands Will Already Be Under Water 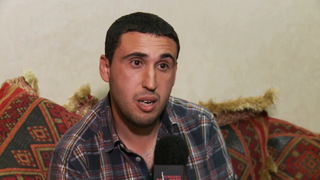