Allan Nairn: Did the FBI Hand the Election to Donald Trump?

Longtime investigative journalist Allan Nairn responds to FBI Director James Comey’s actions that jolted the presidential race a week and a half ago, when he notified congressional leaders that the agency was investigating more emails as part of its probe into Hillary Clinton’s use of a private email system.

AMY GOODMAN: I wanted to turn to the events leading up to the election, to November 8th. Last night we had an extended six-hour discussion covering all of the various developments around the country, the races from the presidency to the Senate to the House to governor’s races, covering ballot initiatives. And I wanted to turn to one of our guests who was speaking last night, investigative journalist Allan Nairn. I asked him about FBI Director James Comey, who jolted the president’s race a week and a half ago when he notified congressional leaders that the FBI was investigating more emails as part of its probe into Hillary Clinton’s use of a private email system. I asked him about the role of the FBI in this election.

ALLAN NAIRN: If it turns out that Trump wins narrowly in the Electoral College, it would be entirely fair to say that the FBI swung the election to Trump. And I don’t think anyone has ever claimed that J. Edgar Hoover swung a presidential election. I mean, Hoover had people assassinated. He tried to drive Martin Luther King to suicide. He blackmailed presidents. But I don’t think he ever swung a presidential election. In the case of Comey specifically, it looks to me like he probably had his hand forced by his people, because the FBI, as an institution, is just as it was in Hoover days. It’s been, I guess, somewhat reformed since then, but it’s still a deeply right-wing institution. … He saw that his people were going to leak the information about Weiner’s laptop anyway, so he had to come out and say it. So, it’s not so much Comey trying to hand the election to Trump, I think, as the FBI trying to hand the election to Trump.

And it’s really important to note that since the '90s, up until the—there was a period from the ’60s through the ’90s when all sorts of people—the press, the left, liberals—were basically attacking institutions like the FBI, like the CIA, like the U.S. military. But since the ’90s, a lot of liberals, at least, have basically dropped that attack and have started to make these institutions somewhat sacred and not questioning them. And now it's, you know, coming back to bite, in a way. If what you mentioned before, that one projection that says Trump wins the Electoral College, but Clinton wins the popular—if that happens, it will be bitterly ironic, because one of the things that happened in this election was you had Trump, the true revolutionary, the rightist revolutionary, running against Clinton, the candidate of the status quo. And so you had Trump saying, “The system is rigged, the system is rigged,” and then, in response to that, the Democrats basically saying, “No, the system isn’t rigged.” Well, in fact, the system is rigged, but it’s just rigged in the opposite direction than what Trump claims. And if you get that particular outcome—Trump wins the Electoral College, Clinton wins the popular—that was rigged in the Constitution. Rather than having presidential election by popular vote, which is the logical thing for a democracy—

JOHN NICHOLS: And every other country.

ALLAN NAIRN: Just about—you have this—you have this system, which was supposed to be a check. The Constitution is full of various checks on what they used to—they thought of as the mob then. And yeah, so you had this incredible situation where the rightist was the candidate of revolution, and the Democrats were basically saying, “Oh, no, no, no. The system is essentially OK.” 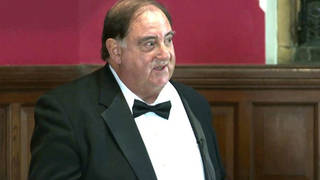