Student groups, faith communities and labor organizers are calling for Wendy’s to join the Fair Food Program and respect the rights of farmworkers. On March 6, Fair Food advocates will convene at Wendy’s headquarters here in Columbus, Ohio, for a major demonstration, calling on the the fast-food giant to establish more humane farm labor standards and fairer wages for farmworkers. We speak to Natali Rodriguez, a member of the Alliance for Fair Food.

AMY GOODMAN: As we wrap up now with our last segment, we’re broadcasting from Westerville, Ohio, right near the headquarters of the fast-food giant Wendy’s. Student groups, faith communities and labor organizers are calling for Wendy’s to join the Fair Food Program and respect the rights of farmworkers. The Fair Food Program was launched by the Coalition of Immokalee Workers in 2011. This coming March 6th, Fair Food advocates will convene at Wendy’s headquarters here in Columbus, Ohio, for a major demonstration, calling on the fast-food giant to establish more humane farm labor standards and fairer wages for farmworkers.

For more, we’re joined right now by Natali Rodriguez, a member of the Alliance for Fair Food.

Natali, thanks so much for joining us.

NATALI RODRIGUEZ: Thank you for having me.

AMY GOODMAN: In these last few minutes we have, explain why you’re focusing on Wendy’s, based right near here in Ohio.

NATALI RODRIGUEZ: Yeah, absolutely. And to be clear, I am not a—I’m not a farmworker. A member of the Coalition of Immokalee Workers, unfortunately, he was not able to be on the show, given that he doesn’t speak English, but I do want to say that—

AMY GOODMAN: Oh, we always have people who speak Spanish on the show. Unfortunately, here, in the TV studio we’re in, we were not able to bring in two people.

NATALI RODRIGUEZ: Right, unfortunately. So we’re missing out on that opportunity, unfortunately. But I do want to say that the reason that we’re focusing on Wendy’s is because, of the five largest fast-food corporations in the country, they are the only one currently not participating in this program. And so, by that, they have chosen to move their purchases of tomatoes from Florida to elsewhere. And in that way, they are choosing to run away from their responsibility to the farmworkers within this industry and are choosing to run away from their responsibility of conditions that they have helped create in the fields for decades. And they have even chosen to come out with a code of conduct for their suppliers, which actually has no teeth in comparison to the Fair Food Program that the CIW has created.

AMY GOODMAN: How does Wendy’s compare to other fast-food giants that the CIW, the [Coalition] of Immokalee Workers, has taken on, like—I don’t know—Taco Bell, that’s owned by Yum! Brands?

NATALI RODRIGUEZ: Right. Taco Bell, Burger King, Subway, Ahold, Chipotle, within the fast-food industry, are all paying one extra penny more for every pound of tomatoes that they purchase within the Fair Food Program. They’re also agreeing to a worker-created code of conduct. And so, those two really essential things, Wendy’s is choosing to not do. They’re not paying—they’re not paying extra for the tomatoes, which would otherwise go directly to farmworker wages. They’re also not agreeing to work with this program, which would protect the human rights of farmworkers in the fields. This program has radically transformed the industry. It is also now expanding. We’re not just talking about Florida anymore. We’re now talking about bell peppers and strawberries. We’re talking about six other states on the East Coast. And it has the potential to just grow even more than that. And so, Wendy’s is choosing to not be part of the solution.

AMY GOODMAN: Well, I want to thank you for being with us. And, of course, we’ll continue to follow this struggle. Natali Rodriguez, member of the Alliance for Fair Food. Many thanks to the students here at OTV. 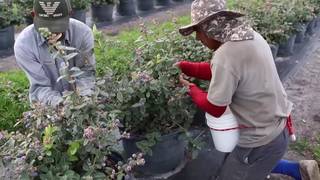