Comedian Chris Rock opened Sunday night’s Oscars ceremony in Los Angeles by welcoming the audience to the “White People’s Choice Awards” as the sharp-tongued host brought attention to the lack of diversity and color at the Academy Awards. The Academy of Motion Picture Arts and Sciences, organizer of the Oscar awards, pledged to double its membership of women and minorities by 2020 through an ambitious affirmative action plan that includes stripping some older members of voting privileges. The announcement came amid a backlash over the absence of actors or filmmakers of color in this year’s Oscars nominations. Several actors and filmmakers boycotted the Oscars after no actors of color were nominated for a second year in a row. While the Oscars were being handed out, the Reverend Al Sharpton held a rally outside, and a star-studded cast of African-American actors, musicians and filmmakers held a free event in Flint, Michigan. Flint has been in the national spotlight over lead poisoning in its water, which stemmed from an unelected emergency manager’s decision to switch the city’s water to the corrosive Flint River. We play highlights from the Oscars ceremony and speak with Rashad Robinson, executive director of Color of Change, which supported the Justice for Flint event. He notes the lack of diversity is not limited to nominations, it is also “inside of boardrooms, inside casting agencies.”

AMY GOODMAN: Lady Gaga performing “Til It Happens to You” at last night’s Oscars, a song from the documentary The Hunting Ground, about sexual assault on college campuses. She was joined on stage by dozens of survivors, who had phrases like “not alone” and “not your fault” written on their arms. Lady Gaga herself is a sexual assault survivor. This is Democracy Now!, democracynow.org, The War and Peace Report. I’m Amy Goodman.

AMY GOODMAN: That’s how comedian Chris Rock opened Sunday night’s Oscars ceremony in Los Angeles. He walked onstage to Public Enemy’s “Fight the Power.” Hollywood’s biggest night had to share the spotlight with protests, boycotts and the sharp-tongued host, which all brought attention to the lack of diversity at the Academy Awards. Rock didn’t hold back the jabs during his opening monologue. These are highlights.

CHRIS ROCK: If they nominated hosts, I wouldn’t even get this job. That’s right. You’d all be watching Neil Patrick Harris right now. … I’m sure—I’m sure there were no black nominees some of those years—say, '62 or ’63—and black people did not protest. Why? Because we had real things to protest at the time. You know? We had real things to protest. You know, we're too busy being raped and lynched to care about who won best cinematographer. You know, when your grandmother’s swinging from a tree, it’s really hard to care about best documentary foreign short. … You know, this year, the Oscars, things are going to be a little different. This year, things are going to be a little different at the Oscars. This year, in the in-memorium package, it’s just going to be black people that were shot by the cops on their way to the movies.

AMY GOODMAN: Chris Rock in his opening monologue for the Academy Awards Sunday night. The Academy of Motion Picture Arts and Sciences, organizer of the Oscar awards, pledged to double its membership of women and minorities by 2020 through an ambitious affirmative action plan that includes stripping some older members of voting privileges. The announcement came amidst a backlash over the absence of actors or filmmakers of color in this year’s Oscar nominations. Several actors and filmmakers boycotted the Oscars after no actors of color were nominated for a second year in a row. While movies about African Americans like Straight Outta Compton and Creed received nominations, they went to the white writers of Straight Outta Compton and white actor Sylvester Stallone for Creed. He didn’t win that last night. But the African-American directors and nonwhite actors were excluded.

While the Oscars were being handed out, the Reverend Al Sharpton held a rally that attracted a crowd of about 50 protesters in the shadow of Dolby Theatre, where the Oscars were held. The protest in Hollywood was one of several taking part across the country. A star-studded cast of African-American actors, musicians and filmmakers held a free event in Flint, Michigan, which has been in the national spotlight over poisoning of their water supply, which stemmed from an unelected emergency manager’s decision to switch Flint’s water to the corrosive, polluted Flint River. Creed director and co-writer Ryan Coogler and Selma director Ava DuVernay attended the #JusticeForFlint event on Oscar night. Other attendees included Grey’s Anatomy star Jesse Williams, musician Janelle Monáe and comedian Hannibal Buress.

Well, for more, we’re joined here in New York by Rashad Robinson. He is executive director of Color of Change, which supported the Justice for Flint event, as well. And in Los Angeles, Hector Becerra joins us, news and feature reporter and assignment editor at the Los Angeles Times. His most recent article, “In This Town, It’s as if Hollywood Tries Not to Cast Latinos.”

We welcome you both to Democracy Now! Rashad Robinson, you were tweeting through last night’s Oscars. The significance of what took place? There was the boycott, and there’s those who didn’t boycott, like Chris Rock, who was the host, the M.C., but he addressed that directly, and, well, you heard what he had to say.

RASHAD ROBINSON: Yeah, I mean, I think there was pieces that were funny. There were definitely cringe-worthy moments. That’s what comedians do. But more than just the problems with not enough actors or actresses being nominated, or directors, this is a bigger problem throughout Hollywood. It goes from the casting agencies to the studios, to the Hollywood press. All across Hollywood, we have this problem of lack of diversity, that continues to replicate itself in the decisions that are made inside of boardrooms, inside of casting agencies, around who gets hired and who doesn’t, what stories get told and whose stories don’t get told, whose stories get prioritized and not. And it creates a culture that we all have to then deal with, where some people’s stories are prioritized and not prioritized. And so, I’m glad the Oscar addressed that, but it’s a much bigger problem than one actor being nominated or not. It’s systemic.

AMY GOODMAN: I want to turn back to Chris Rock’s opening monologue during the Oscars ceremony.

CHRIS ROCK: Is Hollywood racist? Is Hollywood racist? You know, that’s a—you know, you’ve got to go at that at the right way. Is it burning-cross racist? No. Is it fetch-me-some-lemonade racist? No. No, no, no. It’s a different type of racist. Now, I remember one night I was at a fundraiser for President Obama. A lot of you were there. … As they’re setting up the picture, you get like a little moment with the president. I’m like, “Mr. President, you see all these writers and producers and actors? They don’t hire black people. And they’re the nicest white people on Earth. They’re liberals. Cheese!” That’s right. Is Hollywood racist? You’re damn right, Hollywood’s racist. But it ain’t that racist you—that you’ve grown accustomed to. Hollywood is sorority racist. It’s like, “We like you, Rhonda, but you’re not a Kappa.”

RASHAD ROBINSON: Yeah, I think that that was actually a very funny moment. Also it’s an example of how racism is situated in our current context. Yes, we have the racism of police brutality or redlining in housing. But we have the—this subtle racism, the structural racism that prevents certain people from having opportunities in the workplace, prevents people from having access to, you know, the voting booth, the shape shifting of racism over time. And I think Hollywood reflects that. And the fact of the matter is, is that folks that can be liberal, that can vote for Obama, that can bundle and give a lot of money to Obama or give money to the right things, can still make these decisions every day that are completely inaccurate in terms of the world we want to see.

AMY GOODMAN: And this is a clip of Chris Rock, who did a man-on-the-street segment for the Oscars broadcast. He spoke to moviegoers outside. He said this is a place he had to go as far away as he could from Hollywood, and that was to Compton. And he asked people if they’ve seen any of the Oscar-nominated movies.

COMPTON RESIDENT 1: No. What the hell is that? No, I didn’t see that movie.

CHRIS ROCK: Do you feel that Trumbo should have been a bigger hit?

CHRIS ROCK: How about Brooklyn?

CHRIS ROCK: Did you see The Big Short?

COMPTON RESIDENT 6: I did not.

CHRIS ROCK: How about The Bridge of Spies?

COMPTON RESIDENT 4: Where are you getting these movies from? You’re making up stuff. You’re messing with me, right?

CHRIS ROCK: No, these are real movies.

COMPTON RESIDENT 4: No, it’s not. I watch movies. I come to the movies all the time.

CHRIS ROCK: These are real movies.

RASHAD ROBINSON: I thought it was—I thought that was hilarious, a hilarious bit, and also an example of the different world we live in. I mean, actually, there’s been a couple of really good studies back between 2012 and 2013. The highest box office movies, the top, out of the—the top four out of the 10 were movies that had diverse casts. Black moviegoers actually account for a growing and high number of moviegoers and consistently high moviegoers. So, in fact, Hollywood is actually swimming up their—sort of the own stream of their self-interest financially. And we’ve seen examples currently in television where greater diversity has led to sort of more eyeballs. Greater diversity has led to a change in sort of representation at the Emmys. And the Oscars still lags behind. And they use these old kind of examples, these out-of-date excuses for why they can’t come into the modern age.

Is Hollywood “Ambivalent About Latinos,” Limiting Them to Roles of Housekeeper and Gang Member?

NEXTIs Hollywood “Ambivalent About Latinos,” Limiting Them to Roles of Housekeeper and Gang Member? 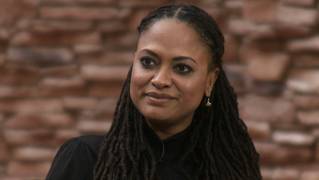