Is Hollywood “Ambivalent About Latinos,” Limiting Them to Roles of Housekeeper and Gang Member?

“Hollywood seems to be a little bit ambivalent about Latinos, about portraying them, sometimes indifferent,” says our guest Hector Becerra, a news and feature reporter and assignment editor at the Los Angeles Times who recently wrote an article headlined, “In This Town, It’s as if Hollywood Tries Not to Cast Latinos.” He says, even when they are included, “there’s a lack of nuance,” because they are often portrayed as a housekeeper or gang member. We also discuss the significance of Mexican-born filmmaker Alejandro González Iñárritu winning best director for a second year in a row.

AMY GOODMAN: I wanted to go to Hector Becerra, a news and feature reporter and assignment editor for the Metro Times section of the Los Angeles Times. This was a little out of character for your writing, the piece you did on the Oscars, but you did it, Hector, “In This Town, It’s as if Hollywood Tries Not to Cast Latinos.” Talk about what you found.

HECTOR BECERRA: Well, I mean, I think—you know, I’m not an industry reporter. I’m a news reporter. But I think my impressions were basically just as a Mexican American who grew up in L.A., in a city that, I think, Chris Rock in The Hollywood Reporter two years ago referred to as being racist toward Mexicans. And I think one of the things that he said is, it’s hard if you’re a Mexican American or Latino to just get supporting roles, even within studios, even those sort of technical roles. I think it’s—you know, what I wrote about was based on talking to people, but also just based—sort of an eyeball test. When you look at movies in Hollywood, I think Hollywood seems to be a little bit ambivalent about Latinos, about portraying them, sometimes indifferent, and seems to take shortcuts. You know, they will cast certain roles that sort of have like the word “Latino” or “Mexican” in neon lights above: This is a housekeeper, therefore Latino; this is a gang member, therefore Mexican. And I think there’s a lack of nuance in how Hollywood portrays Latinos, and actually sometimes just fails to portray them at all.

AMY GOODMAN: I want to turn to the acceptance speech of the Mexican-born filmmaker Alejandro González Iñárritu, who won best director for a second year in a row. Only three directors in history have won this. Last year it was for Birdman, this year he won for The Revenant, which stars Leonardo DiCaprio, who also won. This is what he said.

ALEJANDRO GONZÁLEZ IÑÁRRITU: I am very lucky to be here tonight, OK? But unfortunately, many others haven’t had the same luck. There is a line in the film that says, Glass to his mixed-race son, “They don’t listen to you, they just see the color of your skin.” So what a great opportunity to our generation to really liberate ourselves from old prejudice and, you know, this tribal thinking, and make sure, for once and forever, that the color of skin become as irrelevant as the length of our hair.

AMY GOODMAN: That’s Mexican-born filmmaker Alejandro González Iñárritu. Hector Becerra, the significance of his win last night and the work he does?

HECTOR BECERRA: Well, I think it’s counterpoint, in many ways, to sort of the narrative, the political narrative, of Mexicans in this country or coming into this country. Of course, we had Donald Trump’s controversial statements about Mexican—Mexico importing rapists. And here you have—I think this is the third Mexican director, best picture—best director award to go to a Mexican filmmaker in a row. I don’t—you know, Cuarón, I think, won for Gravity, and then Iñárritu has won two years in a row. So I think it’s sort of an interesting counterpoint. I hope people notice it. I hope that it presents people with a different view of sort of the talent that is just waiting to be tapped in Hollywood.

AMY GOODMAN: And, Hector, what about whitewashing, what you refer to, white actors taking the roles and playing Latino characters?

HECTOR BECERRA: Well, I mean, I think—growing up, some of my favorite movies were, for example, The Good, the Bad and the Ugly, and it never bothered me that Eli Wallach played Tuco. I loved the movie. But there isn’t a lot of reciprocity; it doesn’t necessarily go the other way. I think I mentioned the show Fear the Walking Dead, which I actually enjoyed. There are two characters that really could have very easily have been Latino, played by Latinos, and they weren’t. One was played by an actress that was actually born in Sweden, and she’s supposed to be the daughter of Salvadoran immigrants. And the other is played by some Italian-American actor whose mother is Sicilian, and he’s said it kind of gave him a Spanish-like skin texture. I think Hollywood doesn’t have to exactly pull a groin or a hamstring to have a little more sophisticated portrayal of Latinos, or actually even include them a little bit more, especially in shows that are set in L.A., like Fear the Walking Dead was. In fact, I think much of the action was set in the Eastside, which is where I was born. And I can tell you, the Eastside is like 95 percent Mexican-American.

AMY GOODMAN: Well, Hector Becerra, I want to thank you for being with us. We’re going to link to your article at the L.A. Times. And thank you so much to Rashad Robinson, who is the executive director of Color of Change.

That does it for our broadcast. We have job openings. Go to our website at democracynow.org. 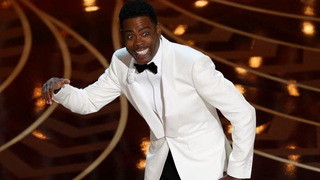