The Intercept reports that what began as an investigation into Blackwater founder Erik Prince’s attempts to sell defense services in Libya and other countries in Africa has widened to a probe of allegations that he received assistance from Chinese intelligence to set up an account for his Libya operations through the Bank of China. The Justice Department is also seeking to uncover the precise nature of Prince’s relationship with Chinese intelligence. We get details from Matthew Cole and Jeremy Scahill about what they uncovered in their joint story, “Erik Prince in the Hot Seat: Blackwater’s Founder is Under Investigation for Money Laundering, Ties to Chinese Intel, and Brokering Mercenary Services.”

AMY GOODMAN: Our guests for the hour are Jeremy Scahill, co-founder of The Intercept, and Matthew Cole, the national security reporter for The Intercept, previously an investigative reporter with NBC. Their new exposé is “Erik Prince in the Hot Seat: Blackwater’s Founder is Under Investigation for Money Laundering, Ties to Chinese Intel, and Brokering Mercenary Services.” And I hope we get, in this hour, to a number of issues, including Matthew Cole’s recent piece on one of the Navy SEALs who was involved with the killing of Osama bin Laden. Juan?

JUAN GONZÁLEZ: Yeah, Matthew, I wanted to go back for a second to the—to Prince’s connections and work in Libya, because Libya is essentially a failed state. There’s competing groups claiming to be the actual government, and not to mention all the other insurgent groups. Who was he working with in Libya?

MATTHEW COLE: Well, it’s a little murky in terms of who he was working with. What we know about Erik Prince’s interest in Libya is that it began early on, almost—I believe it began by 2011, when—the fall of Gaddafi. But by 2013, he was in Libya, had come together with a proposal with a few partners to offer a complete Blackwater service for counterinsurgency. He wanted to bring stability into the East and wipe out the Islamists, who were gaining strength subsequent to Gaddafi’s fall.

And initially, he had a difficult time finding the right partners. It was clear, when he was meeting with people, that he didn’t trust some of the factions that he was dealing with. I think it was—he wasn’t familiar with Libya—he’s certainly not an Arabist or an expert—and had a difficult time trying to figure out who was who. And ultimately what he did was he went after meetings trying to broker a deal with a man by the name of General Haftar, who is now the head of armed forces essentially in Libya, but who has lived in the—he’s a dual U.S. citizen, lived in the U.S. for a long time and worked with the agency, the CIA, for many years.

And what he did was, over time, he changed his proposal, and the reason why was because in his offering of a group of European white mercenaries, non-Muslim mercenaries, he didn’t get a whole lot of takers. And what he was advised was that if you want to sell this program, what you need to do is give them something that was politically palatable. So what you need to do is you need to offer a solution to a problem that they currently have that they can’t seem to control, which was migration, the problem of migrants coming up through well-established, you know, lanes, if you will, routes, to try to get into Europe. And if you provide them with a border solution, that is something that not only will they accept, but you can probably get buy-in of the European Union, because the European Union, of course, is the one who receives the migrants on the other end.

And so, come 2015, last year, where you had this crisis, a refugee crisis, as far as Europe is concerned, and certainly is very evident from the conflicts in the Middle East, they have all of these migrants washing up at their shores, and many of them get there from—leave Libya, regardless of whether they were from Libya. And so, now he’s starting to get a little bit more traction, because the—he wasn’t offering a mercenary force, he was offering a border control system. And what was—and, in fact, this is part of where our story began, in terms of where we picked it up, because what we were being told was, is that, yeah, he’s offering a border service, a border patrol, but what is really his intent is, is to build a mercenary force, and that this is just the fig leaf that allows him to do it, if he can sell this.

There was a second complication, which is that Libyan government, because it’s essentially a divided government in a stalemate, something like a civil war, and it is a failed state, they’re financially frozen. They have a lot of money sitting in their central bank from all of their oil wealth, $150 to $180 billion, but no one will allow them to spend it, because no one’s sure which government is in power, and no one’s sure what—if whether the money being spent is legitimate. And so, Erik had this problem, which was he had the Libyans who were interested, but they couldn’t pay for anything. And so, the EU—partnering with the EU potentially was a way to get half of it funded from Europe and also to get the Europeans to help free up some of that money. And so, now Erik Prince was offering something, not just a mercenary force; he was acting as a banker. He was a real knight in shining armor for Libyan government officials who were sitting there with no money. And so, what we saw and what we could see from—and what our sources were saying was that what this was, was an opportunity, unlike the other proposals that he was offering, was the ability to be a banker for Libyan officials. And that is what started to get him into some real trouble. 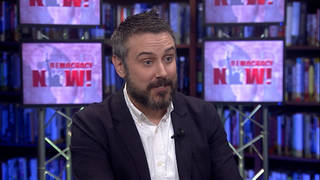