Honduras is still reeling from last week’s assassination of Berta Cáceres, one of the country’s most well-known environmental and indigenous leaders. She was gunned down in her home early Thursday, less than a year after she won the prestigious Goldman Environmental Prize. Cáceres is at least the 110th environmental or land defender to be killed in Honduras since 2010 in the wake of a U.S.-supported coup. At the time of her assassination, Cáceres was with Gustavo Castro Soto, another well-known environmental campaigner and coordinator of Friends of the Earth Mexico. He witnessed the shooting and sustained two bullet wounds. Now, human rights activists say the Honduran government is detaining Castro without cause and refusing him permission to return to his native Mexico. We speak with Beverly Bell, longtime colleague of both Castro and Cáceres and coordinator of Other Worlds, a social and economic justice organization.

AMY GOODMAN: Today is International Women’s Day. And a shout-out to the students at P.S. 128 in Washington Heights, who have come to watch Democracy Now! today in our studios. This is Democracy Now!, democracynow.org, The War and Peace Report. I’m Amy Goodman, as we turn now to Honduras, which is still reeling from last week’s assassination of Berta Cáceres, one of the country’s most well-known indigenous environmental leaders. She was gunned down in her home early Thursday, less than a year after she won the prestigious Goldman Environmental Prize. She is at least the 110th environmental or land defender to be killed in Honduras since 2010 in the wake of a U.S.-supported coup. Her death has sparked protests across the Americas. A demonstration is scheduled today outside the United Nations.

At the time of her assassination, Berta was with another well-known environmental campaigner, Gustavo Castro Soto, coordinator of Friends of the Earth Mexico. He was shot twice in the attack. Over the weekend, Castro attempted to leave Honduras, but authorities blocked his exit, even though he was accompanied by the Mexican ambassador. Castro was eventually ordered to return to the town of La Esperanza, where Berta Cáceres had been gunned down. Castro has been held there ever since for additional questioning, the Honduran government says.

Well, for more, we’re giong to Albuquerque, New Mexico, where we’re joined by Beverly Bell, longtime friend of both Gustavo and Berta. She’s currently the coordinator of Other Worlds, a social and economic justice organization. Bell is an associate fellow at the Institute for Policy Studies.

Welcome back to Democracy Now!, Beverly Bell. What is happening right now in the wake and the horror of the Berta Cáceres assassination? What’s happening to Gustavo Castro Soto?

BEVERLY BELL: Well, the first thing to point out is that Gustavo is not only the sole witness, he also was a target for assassination. He was, as you mentioned, Amy, shot twice. And in the one letter that he has been able to get out to a few of us, he said, “They tried to assassinate me, and they are still trying to assassinate me.” Gustavo feigned death after having been shot twice. The death squads, who were sent, we are certain, by the Honduran government, thought that he was dead. They left. Berta died in Gustavo’s arms. He was then immediately picked up for questioning. He is now in his fifth day of questioning. It reads like the worst horror movie you could ever imagine. It’s just been crazy, where Gustavo was locked up in horrible conditions, horrible, denied food and drink and other things, which I have been asked not to report until he leaves the country, for his security.

He then, as you mentioned, was taken by the Mexican ambassador, was given safe haven in the Embassy of Mexico, because he’s a Mexican citizen, for one day. He was being escorted by the ambassador to the airport. He was on his way to pass customs. He had just hugged the ambassador goodbye, when suddenly this gang of Honduran authority thugs showed up and took him back. It was crazy. There has been this supposed diplomatic tug-of-war between Mexico and Honduras. I should say the Mexican government had absolutely no right to return him to the Honduran authorities.

He is now back in the little town where Berta lived, which was the headquarters of her organization, which is an indigenous grassroots organization. And he is now held again for questioning. We are certain that they want to keep Gustavo out of the way. He said that my life—quote, “My life is in extreme danger right now.” And it absolutely is.

AMY GOODMAN: I want to go to—

BEVERLY BELL: The government of Honduras wants to pin Berta’s—

AMY GOODMAN: I want to go to—Bev, I want to go to Gustavo Castro Soto in his own words. He has long stood up to multinational mineral extraction companies in Mexico, where he’s involved with the M4 movement, or the Mesoamerican Movement Against the [Extractive] Mining Model. This was from last year.

GUSTAVO CASTRO SOTO: [translated] We are finding many challenges in Chiapas around dams, around the issues of climate change, mining, monoculture, exclusion of different sectors of farmers, of the indigenous. And I believe a very important part of this will be to see the young people themselves, and students of universities and social processes, involved in the struggle and resistance, but especially in the search for alternatives. Young people have much to contribute, and the academy also has to be linked to social struggles.

AMY GOODMAN: So that is Gustavo Castro Soto. He was speaking in his own words last year. So, Bev Bell, in these last minutes we have—he’s been shot twice. The Mexican ambassador tried to get him out of Honduras, after Berta Cáceres—and he witnessed this assassination—was assassinated, but he survived. He’s now been taken again back to La Esperanza, where he was shot and she was assassinated. What are you calling for now?

BEVERLY BELL: We are calling for his safe passage out of Honduras back to Mexico. We are also calling for an independent investigation of the assassination of Berta Cáceres, because so far it’s been grossly manipulated by the Honduran government, which is seeking to target and blame other members of Berta’s group, who themselves had been detained and are now being investigated and interrogated without lawyers being present. And we are also calling for the decriminalization of the indigenous and popular group, COPINH, that Berta led.

I want to say that this is not just a horrible human rights crisis happening in Honduras right now. It is also a battle for the future of Central America, which is the epicenter of extractive industries. So, on the one hand, you have multinational corporations that are in Honduras to take over forests, mines, waters, indigenous lands and intellectual property rights, which others call indigenous knowledge, and on the other hand, you have social movements, which in Central America have been led by Gustavo Castro and by Berta Cáceres for the protection of these indigenous lands, for rights and for participatory democracy.

AMY GOODMAN: Bev Bell, because this is International Women’s Day, I want to end with the words of Berta Cáceres when she won the 2015 Goldman Environmental Prize.

AMY GOODMAN: Again, that was the assassinated Honduran indigenous environmentalist, Berta Cáceres. And I also will continue—we will continue to cover what is happening to Gustavo Castro Soto, though the Mexican ambassador tried to get him out of Honduras. He survived the assassination attempt on him, but he’s been shot twice. The Honduran authorities are continuing to keep him. Bev Bell, thanks so much for joining us from New Mexico.

And that does it for our broadcast. To see our full report on Berta Cáceres, you can go to democracynow.org. 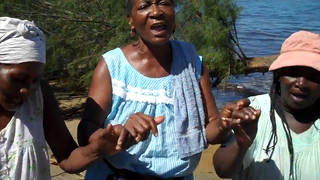