On Monday, John Kerry became the first secretary of state to visit Hiroshima, the Japanese city destroyed by a U.S. nuclear bomb on August 6, 1945. Three days after the Hiroshima bombing, the U.S. dropped another nuclear bomb on the city of Nagasaki. Hundreds of thousands were killed. The United States is the only country ever to drop an atomic bomb. Kerry offered no apology for the U.S. nuclear attack but called for “a world free from nuclear weapons.” Despite his remarks, the Obama administration has been quietly upgrading its nuclear arsenal to create smaller, more precise nuclear bombs as part of a massive effort that will cost up to $1 trillion over three decades. We speak to Marylia Kelley. Her group, the Alliance for Nuclear Accountability, just published a report titled “Trillion Dollar Trainwreck: Out-of-control U.S. nuclear weapons programs accelerate spending, proliferation, health and safety risks.”

AMY GOODMAN: Yes, we are on the road in California. This is Democracy Now!, democracynow.org, The War and Peace Report. I’m Amy Goodman. We’re on a 100-city tour, now at Stanford University in Palo Alto, California, heading to Santa Cruz tonight. Then we’ll be in Los Angeles tomorrow night and heading through Northern California on the weekend. On Monday, we’ll be in Salt Lake City, celebrating community media around the country.

Well, on Monday, John Kerry became the first secretary of state to visit Hiroshima, the Japanese city destroyed by a U.S. nuclear bomb on August 6, 1945. Three days later, the U.S. dropped another nuclear bomb on the city of Nagasaki. Hundreds of thousands of Japanese people were killed. The United States is the only country to ever drop an atomic bomb. Kerry toured the Hiroshima Peace Memorial Museum, but offered no apology for the U.S. nuclear attack. He said Hiroshima was a gut-wrenching reminder the world should abandon nuclear weapons.

SECRETARY OF STATE JOHN KERRY: Going through this museum was a reminder of the depth of obligation that every single one of us in public life carries, in fact, every person in position of responsibility carries, to work for peace, to continue the efforts that President Obama and other leaders came together to talk about in Washington a few days at the Nuclear Security Summit, to create and pursue a world free from nuclear weapons.

AMY GOODMAN: Earlier this month, President Obama hosted more than 50 world leaders for his fourth and final Nuclear Security Summit, focused on efforts to lock down vulnerable atomic materials to prevent nuclear terrorism. Obama inaugurated the summit nearly six years ago after a 2009 speech in Prague laying out the goal of a world free of nuclear weapons. Despite both Obama’s and Kerry’s remarks, the United States has been quietly upgrading its nuclear arsenal to create smaller, more precise nuclear bombs as part of a massive effort that will cost up to $1 trillion over three decades.

Well, a new report by the Alliance for Nuclear Accountability details the government’s nuclear proliferation plan. For more, we’re joined by one of the report’s authors. The report is titled “Trillion Dollar Trainwreck: Out-of-control U.S. nuclear weapons programs accelerate spending, proliferation, health and safety risks.” Marylia Kelley is executive director of Tri-Valley CAREs, or Communities Against a Radioactive Environment, a partner organization with the Alliance for Nuclear Accountability.

MARYLIA KELLEY: Thank you for having me.

AMY GOODMAN: Talk about the significance of John Kerry being the first sitting U.S. secretary of state to go to Hiroshima.

MARYLIA KELLEY: Well, symbolism is important, so we certainly support that and support Obama—excuse me—and support Obama going. But it can’t be mere symbolism and photo op. Kerry went empty-handed. The United States needs to go with a concrete plan to roll back its own nuclear weapons program. You cannot preach abstinence, in terms of nuclear weapons, from the biggest bar stool in the room. And so, we are pressing President Obama to go to Hiroshima, but to go with an announcement that he will cancel a new warhead and new cruise missile—together, they’re called the Long-Range Standoff weapon.

As you noted, there’s a trillion-dollar plan over the next 30 years to upgrade every single part of the United States nuclear weapons stockpile. And right now, as we’re speaking, at Livermore Lab, an hour, hour-15 minutes from here, they’re designing a new warhead, a particularly destabilizing new warhead, to sit atop a new cruise missile. This Long-Range Standoff weapon, if you think about what that name means, it means that an airplane will be able to stand off its intended target by thousands of miles, launch a smart nuclear weapon that will hug the terrain and be radar-evading and will arrive as a surprise nuclear attack. It is a weapon that goes beyond deterrence. No matter what you may think of deterrence, positively or negatively, it goes beyond deterrence. This is about nuclear war fighting. This is about potentially initiating a nuclear war. Additionally, the conventional version and the nuclear version will be indistinguishable. So if it is picked up on radar, a country will not know whether it’s being attacked by a nuclear or a conventional weapon. And that could trigger a nuclear response if it’s a nuclear-armed state.

So we’re actually in a very, very dangerous place. And the United States is initiating a new nuclear arms race, because the other nuclear-armed states, of course, when they look at our, quote-unquote, “modernization program,” are now beginning their own. So we need this to be rolled back. If Obama goes to Hiroshima, he needs to use that as an opportunity, not to speak empty promises and rhetoric about an eventual world free of nuclear weapons, but to make concrete proposals about how the United States is going to take steps in that direction and how we’re going to change course, because right now we’re taking giant steps in the opposite direction.

AMY GOODMAN: What is the trillion-dollar trainwreck, Marylia Kelley?

AMY GOODMAN: What’s the alternative, in this last minute?

MARYLIA KELLEY: The United States is boycotting it because it doesn’t believe these discussions are useful or productive. But, of course, they are the most important discussions on the planet. And we need to close the legal gap, and we need to actually get the United States and all of the other nuclear weapons states to live up to their obligations under the Non-Proliferation Treaty.

AMY GOODMAN: Marylia, we’re going to link to your report —

AMY GOODMAN: —at democracynow.org, executive director of Tri-Valley CAREs, or Communities Against a Radioactive Environment. That does it for the show. We’ll continue the discussion and post it online at Democracy Now!

Tonight, Santa Cruz at the Rio Theatre, tomorrow at Claremont at Pitzer and then back to Los Angeles. Then we’ll be in Santa Rosa, Willits and Redway, Sunday in Davis, Chico and Berkeley, before heading Monday to Salt Lake City. 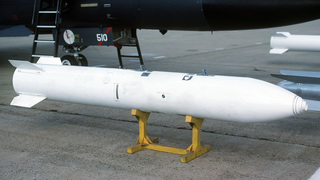