President Obama’s fourth visit to Saudi Arabia for a meeting with leaders of the Gulf Cooperation Council comes as human rights organizations have been pressing Congress to block arms sales to the kingdom in the wake of Saudi-led coalition strikes in Yemen. The United Nations estimates more than 3,000 civilians have been killed since the Saudi bombing campaign began last March. We speak with William Hartung, senior adviser to the Security Assistance Monitor, who recently wrote in The New York Times that “Obama Shouldn’t Trade Cluster Bombs for Saudi Arabia’s Friendship.” Hartung is also the director of the Arms and Security Project at the Center for International Policy. His latest book is called “Prophets of War: Lockheed Martin and the Making of the Military-Industrial Complex.”

NERMEEN SHAIKH: We end today’s show in Saudi Arabia, where President Obama is meeting with leaders of the Gulf Cooperation Council in the capital of Riyadh. The visit comes at a time of strained relations between the two allies, following the Iran nuclear deal and a push by some congressmembers to declassify 28 pages of the 9/11 report believed to document Saudi Arabia’s involvement in the terrorist attacks. Meanwhile, human rights organizations have been pressing Congress to block arms sales to the kingdom in the wake of Saudi-led coalition strikes in Yemen. The United Nations estimates more than 3,000 civilians have been killed since the Saudi bombing campaign began last March.

AMY GOODMAN: This comes as Saudi Arabia has threatened to sell off $750 billion in U.S. Treasury securities if Congress passes a law to allow the families of the victims of the September 11th attacks to sue the Saudi government for any role it may have played in the attacks. The Obama administration has lobbied Congress to block the bill’s passage.

To talk more about the significance of President Obama’s visit to Saudi Arabia, we’re joined by Bill Hartung, senior adviser to the Security Assistance Monitor, also director of the Arms and Security Project at the Center for International Policy.

Welcome to Democracy Now!, Bill. The significance of this, President Obama’s fourth trip to Saudi Arabia?

WILLIAM HARTUNG: Well, the thing that amazes me is that since he met with the GCC leaders in May at Camp David last year, he’s approved $33 billion in weapons sales to the Gulf states, mostly to Saudi Arabia, at a time when the Saudis have been engaged in a brutal bombing campaign in Yemen, accused of possible war crimes, using cluster bombs, at least 3,200 civilians killed. And it’s not clear to what degree he brought this up, to what degree he’s threatened to cut off arms supplies. So, to me, that colors the whole event, because, basically, in the name of reassuring the Saudis about Iran, they’re allowing this to go on and actually facilitating the Saudi killing in Yemen.

NERMEEN SHAIKH: Well, Bill Hartung, you wrote a piece in The New York Times earlier this week headlined “Obama Shouldn’t Trade Cluster Bombs for Saudi Arabia’s Friendship.” Now, in the piece, you write that Saudi-American arms deals are a, quote, “continuation of a booming business that has developed between Washington and Riyadh during the Obama years.” So could you elaborate on that and also on the pressure that’s being put on the Obama administration, especially with respect to the use of cluster munitions in Saudi Arabia—in Yemen by Saudi Arabia?

WILLIAM HARTUNG: Well, under the Obama administration, we’ve made more arms deals with the Saudis than in other—any other time in history. And it’s been the full gamut. They’ve been combat ships, missile defense systems, fighter planes, attack helicopters, guns, bombs, missiles—basically, an entire arsenal. And on top of that, they are providing targeting information to the Saudis, refueling their aircraft. So they’re right in the middle of this conflict. And I think there’s a couple reasons for that. One is this notion of reassuring the Saudis about Iran. One is the underlying issue of oil politics, which I don’t believe has gone away. And one is the fact that it benefits large numbers of weapons contractors, like Boeing and Lockheed Martin and others.

NERMEEN SHAIKH: Well, I mean, one of the justifications that U.S.—some U.S. officials have made about continuing arms sales to Saudi Arabia is that their precision bombs are actually diminishing the number of civilian casualties in Yemen.

WILLIAM HARTUNG: Well, that’s an outrageous claim. They’re trying to divert attention. Obviously, it’s not even clear that the Saudis are making any effort to protect civilians. So, if you’re aiming at civilians, regardless if the bombs are accurate or inaccurate, you’re committing a war crime. And the Saudis have blocked an independent U.N. investigation of what’s going on there, with the tacit support of the United States. So, if they want to have an effect on civilian casualties, they should cut off the bombs and missiles, they should push for an independent investigation. And the notion that more accurate bombs somehow solves this problem is not only outrageous, I think it’s unconscionable.

AMY GOODMAN: I’d like to turn to a clip from a recent conference organized by the antiwar group CodePink in D.C. Mohammed al-Nimr, the son of executed Shia cleric Nimr al-Nimr, addressed the gathering.

MOHAMMED AL-NIMR: My father just spoke. He didn’t—he didn’t do any violence, and he was against any action, even throwing rocks at the police riots, even though they killed him because he disagreed with their ideology. He disagreed with the way they are treating people in Bahrain and inside our country, in Yemen.

AMY GOODMAN: That’s Mohammed al-Nimr, the son of the executed Shia cleric. Now, young people are also slated to be killed—we’ve got 15 seconds, Bill Hartung—executed by the Saudi government.

WILLIAM HARTUNG: The United States has no business arming this regime. And I think relations—this notion of favoring them in any way, I think, is unacceptable, given both their internal policies and what they’re doing in Yemen. If any other country in the world were doing this, they would rightly be treated as a pariah. And I think the administration should do so.

AMY GOODMAN: Bill Hartung, thanks so much for being with us, director of the Arms and Security Project at the Center for International Policy. We’ll link to your article in The New York Times headlined “Obama Shouldn’t Trade Cluster Bombs for Saudi Arabia’s Friendship.”

And that does it for our broadcast. Again, we’re on our 100-city tour across the country celebrating 20 years of Democracy Now! I’ll be speaking tonight at the Boulder Theater and Friday at Colorado College in Colorado Springs. Then, Saturday, it’s on to Eagle, Carbondale and Paonia in Colorado, and Salida on Sunday, then Taos, New Mexico, on Sunday, as well, Albuquerque on Monday, Santa Fe on Tuesday. On Wednesday, I’ll be in Flagstaff, on Thursday in Phoenix and Tucson, then on to Fresno, California, on Friday.

Indian PM Modi Was Once Banned from Entering U.S., Today He Meets Trump at White House 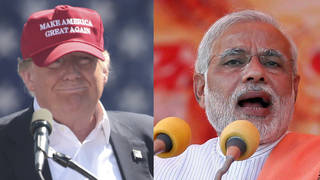 Indian PM Modi Was Once Banned from Entering U.S., Today He Meets Trump at White House