We speak with former Greek Finance Minister Yanis Varoufakis about the refugee crisis in Europe, and so-called hot spots that are registration centers for refugees in his country. “George Orwell would be very proud of Europe and our capacity for doublespeak and creating new terms by which to hide the awful reality,” Varoufakis says. “When you see the word 'hot spots,' just translate it to 'concentration camps.'” He says the Greek government has been pressured to intern the refugees fleeing war and famine, and notes the growth of right-wing parties in Europe, such as Golden Dawn.

StorySep 17, 2020After Fire Destroys Moria Refugee Camp in Greece, Demands Grow for Relocation, Not Another Camp

AMY GOODMAN: This is Democracy Now!, democracynow.org, The War and Peace Report. I’m Amy Goodman. I am in Flagstaff, Arizona, part of our 100-city tour, at Northern Arizona University. Nermeen Shaikh is in New York in the studios with Yanis Varoufakis. He is the former finance minister of Greece, who resigned over austerity. Nermeen?

NERMEEN SHAIKH: So, I want to ask now about one of the issues that you raise in the book and also what brings Greece into the news more often now, which is the refugee crisis, an issue you also discuss in the book. You’ve spoken in particular about the Greek grandmother who’s been welcoming refugees into her home in the village of Idomeni. She is an 82-year-old, and her name is Panagiota Vasileiadou. She was featured recently in a video by the U.N.’s refugee agency, the UNHCR.

PANAGIOTA VASILEIADOU: [translated] I have company in the house. I talk, we laugh. Although we don’t understand each other.

NERMEEN SHAIKH: This grandmother also cooks for the refugees every day, and the children call her Mama. In this clip from last July, just over a week after you resigned, a Syrian migrant on the Greek island of Lesbos decried the conditions in the refugee camp in especially strong language.

NERMEEN SHAIKH: But at the time, the town officials said they were unable to address the situation, especially amid the country’s financial turmoil. This is the mayor of Mytilene speaking last July.

MAYOR SPYROS GALINOS: [translated] It’s as if the international community, the European Union, the Red Cross, the U.N. have given me a bomb to hold in my hands, and the fuse is burning very slowly. And I am desperately crying for help to blow out the fuse, but they are waiting for the bomb to explode before coming to our aid.

AMY GOODMAN: So, Yanis, can you talk about the refugee crisis in Greece and also the so-called hot spots, the registration centers for refugees there, which you’ve talked about?

YANIS VAROUFAKIS: Well, George Orwell would be very, very proud of Europe and our capacity for doublespeak and creating new terms by which to hide the awful reality. When you see the word “hot spots,” just translate it to “concentration camps.” It’s very simple. The Greek government has been steadily pressurized by the European Union to, effectively, intern the refugees. Instead of treating them like human beings in need of support, in need of food, in need of medicine, in need of psychological assistance, they are going to be treated, according to Brussels, as illegals, aliens, that are going to be enclosed in those hot spots, concentration camps. And I have it on good authority from within the Greek government that the pressure is tremendous. The Greek government, which is, of course, fiscally completely and utterly impecunious, is being told, “The only way you are going to get money is if you intern them. So if you let them free and loose, even within Greece, you’re getting not a penny in order to help feed them.” So we have a magnificent array of NGOs and volunteers who are looking after the refugees. The Greek state is in a state of disarray, because it just can’t afford even to look after the Greeks, who are suffering a long, seven-year-old—seven year-long great depression. The Greek state is trying to do something, but is being pushed by Europe to treat inhumanely those refugees.

But more generally, look, this should not be a problem. Europe is large enough. It is rich enough. We should be able to handle this refugee crisis humanely, efficiently, without this even being something we discuss. Let me remind our audience something that most people have forgotten. When the Iron Curtain came down in 1991, Greece, which is—which was never a rich country, a country of 10 million people, we accepted 1 million refugees within a few months. Half of Albania moved to Greece. Do you know what happened? Nothing. It was all fine. They still live there. Their kids come to the university where I teach. They are amongst some of my best students. Greece has become enriched. Our culture has become stronger. Our food has become even better. And if a small, middle-, lower-middle-income country like Greece can accept a 10 percent influx of refugees in a few months and do quite well out of it and actually be stronger as a result of that, Europe, which is aging pathetically, should accept these refugees, like Angela Merkel initially said in September, October. I think she was vetoed by her own party and her own supporters.

So, what we have is, the European Union is disintegrating under its postmodern 1930s. This is what we’ve been experiencing the last 10 years due to the economic crisis. The foundations—

AMY GOODMAN: I want to ask you, Yanis Varoufakis—

AMY GOODMAN: —is Greece being used as an example by Germany, a kind of warning to France?

YANIS VAROUFAKIS: Oh, in the economic realm, there’s absolutely no doubt about that. Amy, one of the wonderful aspects, few wonderful aspects, of having served for five, six months sitting on that electric chair of the finance minister of Greece was that for the first time in my life I didn’t have to theorize about these issues. I was told. German officials of the highest rank answered your question in the affirmative. They said to me explicitly, “How can we let you off the hook, when we want the troika to go to Paris and to rein in the French national budget?” So, a proud nation like the Greeks’ is being used as collateral damage. Its misery is being used as a signal to France that it cannot have its cake and eat it. By that, what I mean—and the Germans, the German elites, have a point of sorts. The French elites always wanted to rule over Europe, to determine the—to be the administrators of Europe, using German monetary credibility to do so. And the Bundesbank and the German government wants to smack them for this. Unfortunately, they are smacking them by smacking Greece and pushing the Greek nation into an awful, frightful recession.

Now, when Europe uses whole populations as instruments for the pursuit of 19th-century-like power politics, you know there is something deeply rotten in the kingdom of Europe. And then, when you add the refugee crisis on top of that, the centrifugal forces, the freeloading attitudes, the not-in-my-backyard kind of mentality that the economic malaise and the economic conflict has caused, then transfers itself onto the realm of dealing with the refugees and treating them as a bad that needs to be thrown off one’s backyard and onto somebody else’s backyard, and the result is a complete loss of Europe’s integrity and soul.

NERMEEN SHAIKH: Well, Yanis, very quickly, before we conclude, you’ve talked about the rise of right-wing parties—and in Greece, Golden Dawn, in particular—as becoming worse as the economic crisis worsened. So could you talk about the impact of Golden Dawn and its recent expansioning power—expanding power?

YANIS VAROUFAKIS: It’s not just Golden Dawn. It’s everywhere in Europe. We have a neofascist government in Hungary. We have Marine Le Pen, who’s going to top the presidential race next year in France. I mean, you just have to state this to panic. You have UKIP, the United Kingdom Independence Party, in Britain. You’ve got Austria; in Vienna, the beautiful city of Vienna, 42 percent voted for a neofascist party in the last municipal election—and last week, in the presidential—

NERMEEN SHAIKH: We have 30 seconds, so, quick, please.

YANIS VAROUFAKIS: Very simple. Great Depression, national humiliation—put them together, like in the 1920s and '30s in Germany, and you end up with the serpent's egg hatching.

AMY GOODMAN: Yanis Varoufakis, before we end, I do have to ask you a question about that song we played, Pulp, “Common People.” Was it about your wife? Can we settle this once and for all?

YANIS VAROUFAKIS: You may very well say this. I couldn’t possibly comment.

YANIS VAROUFAKIS: You may very well say this, but I couldn’t possibly comment.

AMY GOODMAN: Well, I thank you so much for being with us, Yanis Varoufakis, former finance minister of Greece, now professor of economic theory at the University of Athens. His new book, And the Weak Suffer What They Must?: Europe’s Crisis and America’s Economic Future.

And that does it for our show. We have job openings at Democracy Now!, internships as well as fellowships. Go to democracynow.org.

Later today at noon, I’ll be at Changing Hands, on the 20th anniversary of Democracy Now!, in Phoenix, in Tempe, and then on to Tucson, then to Grass Valley, San Mateo. 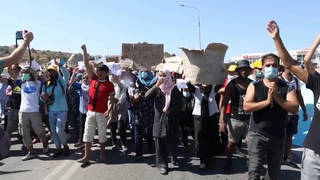