Lena Rothman: A Trump Supporter Assaulted Me at a Rally — Then Police Arrested Me Instead of Him

As violence broke out at a Trump rally in Costa Mesa, California, on Thursday night, we take a look at the increasingly hostile atmosphere that protesters are encountering at Trump’s events. Last month, one of Trump’s supporters was caught on video sucker-punching an anti-Trump protester at a rally in Tucson. But there was another assault at that rally that few heard about. Lena Rothman says she was assaulted by a Trump supporter, and when she reported the assault to police at the Trump event, she herself was arrested. For more, we speak with Lena Rothman.

AMY GOODMAN: I want to go to a slightly different subject. At a Donald Trump rally in Tucson last month, one of Trump’s supporters was caught on video sucker-punching an anti-Trump protester as he was being led away. Tony Pettway was arrested for misdemeanor assault and released. The protester, Bryan Sanders, was kicked out of the rally after chanting “Liar” and holding a sign that read, “Trump is bad for America.” This is Bryan Sanders speaking after the rally.

BRYAN SANDERS: Donald Trump is perfectly welcome to go ahead and run for president. What he’s not welcome to do is to suggest that everybody who opposes him should be violently attacked, that he should be handed the presidency outside of the rules of his own party. I mean, this is sounding like 1933 up in here. And then you saw all hell break loose, this and that, and he’s stomping me. Incredible scenes. I understand that people support Donald Trump. But do they support this kind of scene, really? Donald Trump is associating himself with violent, extremist people, who are willing to go to any lengths, apparently.

AMY GOODMAN: That was Bryan Sanders, who was sucker-punched at the Trump rally. But there was another assault at the rally that you may not have heard about. Lena Rothman says she was assaulted by a Trump supporter. When she reported the assault to police at the Trump event, she herself was arrested. Lena Rothman is here with us. Lena, what happened? This was in March.

LENA ROTHMAN: Yeah, March 19th. I was on a staircase with other organizers and protesters, and this man came barreling down the staircase, pushing and punching people. And then, on—after a while, he made his way back up, and I was in his way. I couldn’t move over because there was a railing. And I got knocked down by him, and I hit my back on a post.

And I decided—after he had got up the staircase, I decided I wanted to take out a complaint, and I went looking for the police. And I went up to the balcony. I spoke to an officer, and I told him what happened. And he said he couldn’t file a complaint, he was busy, he couldn’t leave his post. So, then another officer came in, and I spoke to him. And I ended up speaking to six or seven different policemen to file the complaint, and they all said, no, they couldn’t leave their post, or they ignored me.

And then, finally, they steered me over to their supervisor. And I spoke to him, and I said I wanted to identify the guy, because people were leaving by this time. And when I identified him, I went running over, when I saw him come out. And the supervisor came in back of me, but he was really taking his time. So I was afraid the guy that had assaulted me was going to leave, so I kind of ran up to him. And I’m looking in back of me, and I’m saying, “This is him. This is him. This is the guy.” And I ended up being arrested.

AMY GOODMAN: Isabel Garcia, you sent a photograph of about 20 police officers posing with Donald Trump outside his rally here in Tucson?

ISABEL GARCIA: That’s correct. I was very outraged—I was at the protest, and—that they had Lena in handcuffs. When another guy had assaulted a UCLA student, she had a concussion. Nobody was concerned, but they arrested—

LENA ROTHMAN: It was the same guy.

ISABEL GARCIA: And so, we wanted to know, you know, whether these police officers were involved in this—in these incidents, because, obviously, if they’re Trump supporters and posing while on official duty with Trump, I think that is a real problem for our city. And it’s a real problem for the criminal justice system.

ISABEL GARCIA: Yes, I am. And we have court on Tuesday.

AMY GOODMAN: And what are you calling for?

ISABEL GARCIA: We’re calling for a complete dismissal of these charges.

AMY GOODMAN: And how do you think Donald Trump’s rhetoric affects the legislation here in Arizona? Do you think it does?

ISABEL GARCIA: Oh, absolutely. It wasn’t until Trump came in to really raise the ire of the right wing in Maricopa County that these bills began to get some traction again.

AMY GOODMAN: Well, I want to thank you both for being with us, and it’s certainly a discussion we will continue to have in this presidential election year with Republican front-runner Donald Trump. Isabel Garcia—

ISABEL GARCIA: Thank you so much.

AMY GOODMAN: —co-chair of the Coalition for Human Rights, and Lena Rothman, arrested at a Trump rally in Tucson after she went to police to complain about being assaulted by a Trump supporter.

Well, that does it for the show. We’re on a 100-city tour marking Democracy Now!'s 20th anniversary. Tonight I'm speaking in Fresno, California, on Saturday in San Mateo and Grass Valley, California, then on May Day, May 1st, Sunday, in Houston in the afternoon and New Orleans in the evening at 7:00. On Monday, we’ll be in Sarasota, Florida, and on Tuesday we’ll be headed to Atlanta, Georgia, then to Washington state, to Spokane, Olympia and Seattle, finally, at Town Hall. You can check our website at democracynow.org to follow the tour, to find out if we’re coming to a city near you.

That does it for the show. We have job openings, hiring for our video news production fellowship and internship program. Go to democracynow.org. 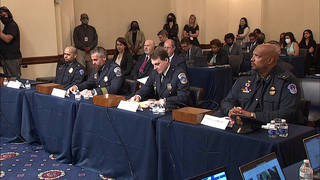