Jeremy Scahill and Glenn Greenwald weigh in on comments from Democratic presidential candidate Hillary Clinton and her rival, Bernie Sanders, who have both supported the use of drones. Scahill notes that while Clinton is often portrayed as a more hawkish “cruise missile liberal,” Sanders also supported regime change in the 1990s. “Bernie Sanders signed onto neocon legislation that made the Iraq invasion possible by codifying into U.S. law that Saddam Hussein’s regime must be overthrown,” Scahill says, and “then supported the most brutal regime of economic sanctions in world history, that killed hundreds of thousands of Iraqis.”

OWEN JONES: You’re a loving parent. What would you say to the loving parents of up to 202 children who have been killed by drones in Pakistan in a program which you escalated as secretary of state?

HILLARY CLINTON: Well, I would argue with the premise, because, clearly, the efforts that were made by the United States, in cooperation with our allies in Afghanistan and certainly with the Afghan government, to prevent the threat that was in Pakistan from crossing the border, killing Afghans, killing Americans, Brits and others, was aimed at targets that had been identified and were considered to be threats. The numbers about potential civilian casualties, I take with a somewhat big grain of salt, because there has been other studies which have proven there not to have been the number of civilian casualties.

JEREMY SCAHILL: Well, I mean, you know, first of all, Hillary Clinton is one of the sort of legendary Democratic hawks in modern U.S. history. She’s—you know, she is what I like to call a cruise missile liberal, where—you know, they believe in launching missiles to solve problems and show they’re tough across the globe. Hillary Clinton, while she was secretary of state, really oversaw what amounted to a paramilitarization of some of the State Department’s divisions, and was the main employer of the private contractors that were working on behalf of the U.S. government, and was one of the key people in the horrid destruction that we’re now—in creating the horrid destruction that we’re now seeing in Libya, because of her embrace of regime change. But Hillary Clinton, on these issues, is sort of, you know, an easy target, because she is so open about her militaristic tendencies.

But Bernie Sanders, in a way, has been given a sort of pass on these issues. Recently at a Democratic town hall meeting, Bernie Sanders was asked directly about whether or not he supports the kill list. The actual term “the kill list” was used in an interview with him. And he said that the way that Obama is currently implementing it, he supports. You know, Bernie Sanders goes after Hillary Clinton all the time for being a regime change candidate—and he’s right—and blasting her for her alliance with people like Henry Kissinger. But let’s be clear: Bernie Sanders in the 1990s was a supporter and signed onto legislation that was authored by Donald Rumsfeld, William Kristol and these notorious neocons, who created the disaster of the Iraq invasion with Democratic support. Bernie Sanders signed onto the key document that—the legislation that was created as a result of the Project for a New American Century, demanding that Bill Clinton make regime change in Iraq the law of the land. Bernie Sanders then voted for that bill, which, again, was largely authored by Donald Rumsfeld and the neocons. Bernie Sanders then supported the most brutal regime of economic sanctions in world history, that killed hundreds of thousands of Iraqis. He supported the bombings in Iraq under President Clinton, under the guise of the so-called no-fly zones, the longest sustained bombing campaign since Vietnam. Bernie Sanders was about regime change. Bernie Sanders signed onto neocon-led legislation that made the Iraq invasion possible by codifying into U.S. law that Saddam Hussein’s regime must be overthrown. So, when Bernie Sanders wants to hammer away at Hillary Clinton on this, go ahead. You are 100 percent right. She’s definitely the politics of empire right there. But Bernie Sanders needs to be asked about his embrace of regime change, because the policies that he supported in the 1990s were the precursor to the disastrous war in Iraq that he hammers on all the time without ever acknowledging his own role in supporting the legislation that laid the groundwork for it.

AMY GOODMAN: Glenn Greenwald, I’m going to give you the last word on this. You, too, have been writing about these candidates.

GLENN GREENWALD: It’s actually kind of amazing there’s nobody with a more adept skill at being able to just selectively concentrate on some things, while ignoring unpleasant things, than the Democratic partisan. I mean, Jeremy is right that Bernie Sanders has been given a pass, but that’s because Democrats have largely chosen to ignore foreign policy as part of the Democratic primary, because they simply don’t care. They only pretend to oppose wars when there’s a Republican in office and doing so can lead to partisan gain. So Hillary goes around the world vowing to get even closer to Netanyahu, to take our relationship with Israel to the next level, refuses even to talk about Palestinians like they’re human. She is responsible for one of the worst disasters of the last five or six years, which is the NATO intervention in Libya, and obviously supports President Obama’s bellicose policies and wants to escalate them. She criticizes him for not being aggressive enough. And yet Democrats just simply pretend none of that exists. They don’t care how many people outside the borders of the United States are killed by a Democratic president. And so Bernie has gotten a pass, unjustifiably, and hasn’t been asked about the things Jeremy described, because Democrats collectively—with some exceptions, but more or less generally—have decided to ignore all of the heinous things that Democrats do outside of the borders of the United States, because paying attention to them reflects so poorly on Hillary, and they just ignore things that reflect poorly on her.

AMY GOODMAN: And Donald Trump? Today, a key primary could determine whether he gets the nod to be the Republican candidate for president, in Indiana?

GLENN GREENWALD: Well, I mean, I just think it’s—in some sense, Washington, D.C.—not the United States, but Washington, D.C.—is getting exactly the election they deserve. These are the two most unpopular presidential candidates ever to run, I think, in 30 years. They have the highest unfavorable ratings of any nominees in decades. The only thing they’re able to do to one another is try and be as toxic and nasty and destructive as possible, because everybody has already decided, more or less, that they’re so unlikable. And so, it’s going to be the opposite of an inspiring election. It’s just going to be two extremely unpopular people trying to destroy the other on both a personal level, backed by huge amounts of money and serving more or less the same interests. And I think the two parties and the establishment leaders in Washington, and the people who support and run that whole system, have gotten exactly the election that they deserve. Unfortunately, Americans are going to have to suffer along with them.

AMY GOODMAN: We have to leave it there, and I want to thank you both for being with us, Pulitzer Prize-winning journalist Glenn Greenwald and Jeremy Scahill, author with the staff of The Intercept of The Assassination Complex: Inside the Government’s Secret Drone Warfare Program. It’s out today.

And that does it for our broadcast. I’ll be speaking tonight in Atlanta at the First Iconium Baptist Church, 542 Moreland Avenue Southeast, then on to Washington state. Spokane, I’ll be speaking Wednesday night, Olympia Thursday, Seattle Friday, Mount Vernon Saturday, then Eugene and Portland, Oregon, on Sunday. Check democracynow.org. 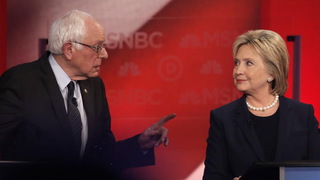