During Thursday’s debate in New Hampshire, while Sen. Bernie Sanders conceded former Secretary of State Hillary Clinton has more experience in foreign affairs, he questioned her judgment for voting for the Iraq War. “But experience is not the only point—judgment is,” Sanders said. “And once again, back in 2002, when we both looked at the same evidence about the wisdom of the war in Iraq, one of us voted the right way, and one of us didn’t.” Clinton repeatedly touted her time as secretary of state. “I was very flattered when Henry Kissinger said I ran the State Department better—better than anybody had run it in a long time,” she said.

AMY GOODMAN: I want to play more of the debate. As former Secretary of State Hillary Clinton and Vermont Senator Bernie Sanders continued to draw distinctions between one another during the debate, they faced off over the issue of the 2002 Iraq War vote.

SEN. BERNIE SANDERS: We differed on the war in Iraq, which created barbaric organizations like ISIS. Not only did I vote against that war, I helped lead the opposition. And if you go to my website, BernieSanders.com, you will see the statement that I made in 2002. And it gives me no pleasure to tell you that much of what I feared would happen the day after Saddam Hussein was overthrown, in fact, did happen.

CHUCK TODD: All right, Senator, I want to stay, though—

HILLARY CLINTON: If I could—

HILLARY CLINTON: If I could just respectfully add—

HILLARY CLINTON: Look, we did differ. A vote in 2002 is not a plan to defeat ISIS. We have to look at the threats that we face right now.

SEN. BERNIE SANDERS: I fully, fully concede that Secretary Clinton, who was secretary of state for four years, has more experience—that is not arguable—in foreign affairs. But experience is not the only point—judgment is. And once again, back in 2002, when we both looked at the same evidence about the wisdom of the war in Iraq, one of us voted the right way, and one of us didn’t.

AMY GOODMAN: During the debate, Hillary Clinton also boasted she has received support from former Secretary of State Henry Kissinger.

HILLARY CLINTON: I have had the opportunity to run a big agency. I was very flattered when Henry Kissinger said I ran the State Department better than anybody had run it in a long time. So I have an idea about what it’s going to take to make our government work more efficiently.

AMY GOODMAN: The issue of the war vote, Lee Fang? Hillary Clinton, as students were being taken out of her office protesting that night in 2002, she took to the floor, as many other Republicans and some Democrats did, and voted to authorize the war in Iraq. How significant that is, what, 14 years later, Lee Fang, and that comment on Henry Kissinger’s support or praise?

LEE FANG: Nothing says anti-establishment like praising Henry Kissinger on stage, right? But seriously, you know, Hillary Clinton did vote for the war in Iraq, and she defended that vote for many, many years. It wasn’t until very late in the game that she kind of retracted and said it was the wrong move.

But, you know, I kind of wish that the moderators pressed the candidates on other specific issues. You know, Hillary Clinton has embraced militarism in a lot of different ways. She has been very belligerent on issues, from Libya, you know, joking with Charlie Rose about wanting to take out Iran. The Obama administration, which worked with the State Department to approve just an incredible increase in arms transfers all throughout the Middle East—I mean, this is something that we don’t talk about much on broadcast news, but, you know, the Obama administration, in part with Secretary Clinton, approved over $90 billion in weapons transfers to Saudi Arabia alone. We’ve really flooded the region with weapons, fueled conflicts, whether it’s in Iraq, Syria and beyond. So these are tough questions, and I kind of wish that the moderators got more specific here, beyond just the Iraq War vote and what to do in Syria. You know, how are you going to resolve these issues?

You know, my colleague, Zaid, he did a story, I think a year ago—you know, Bernie Sanders, back in 1988, when he was campaigning with Jesse Jackson, the issue of Israel-Palestine came up. And he was asked, you know, “How are we going to use our leverage to really resolve the simmering conflict that’s gone on forever?” And Bernie Sanders said, well, you know, we could use our military support, our foreign aid to Israel, and say we were going to withhold that aid unless Israel changes its behavior. I mean, that’s a pretty radical move that really could push the Israel-Palestine issue in the right direction, but we haven’t seen him speak about that on a stage. We haven’t seen Hillary Clinton really address the issue, except in an op-ed that she wrote a few months ago saying that she actually wants to increase military support with Israel and saying that she’ll be a very strong ally with Netanyahu.

So, you know, I would love to see the candidates get more specific about how they will deal with military contractors, how they’ll deal with foreign policy, and really talking about a whole number of votes that we don’t really hear much in public. I mean, Hillary Clinton, when she was in the Senate, voted for—with the Republicans, voted for using cluster bombs in civilian areas. I mean, this is not—the Iraq War vote was not an aberration. There’s a huge pattern of votes that really show her position on foreign policy.

BERTHA LEWIS: Well, I agree with some of what Mr. Fang has said. I’m adamantly opposed to the Iraq War. And again, I keep repeating this, but we’re complex animals, at least I am in my political decisions and how I view things. All of the facts that he pointed out are there. I don’t like—

AMY GOODMAN: But the deciding point, then, clearly, as you talk about that we’re complex people, what has—

BERTHA LEWIS: But the platform—

AMY GOODMAN: —made you cast your lot with Hillary Clinton?

BERTHA LEWIS: For me, the three things that—well, the four things that I cited. With everything put together—like I say, in 2008, I was there, I’m here now, because I really, really believe that when women are in office and this country is behind the rest of the planet, then we have a chance to actually fundamentally move things. We’ve seen it on the Supreme Court. We’ve seen it everywhere.

Number two, because of this experience, the mistakes, disagreements and being involved in that arena, we can go right at her, you know, because, again, I disagree with Barack Obama as the deporter-in-chief, but that doesn’t stop my support for him.

And number three, you know, like I say, I wish—some people have a perch from which they can be very pure and don’t have to engage. For one thing—and I look through a racial lens—I make no bones about that. There’s a movie coming out that has a trailer about Jesse Jackson [sic] going to Germany to run in the Olympics. And—

BERTHA LEWIS: Jesse Owens. Oh, Jesse Jackson, he might have been there, too. There were black people who said, “Don’t do it. Don’t go,” a bunch of white people saying, “Oh, you’ve got to do it, and ignore everything else.” And there’s a scene there in which Jesse is saying, “You don’t know what it’s like for me to have to go through this.” And this white man says, “I don’t care!” And Jesse says, “Because you don’t have to.” So, again, for me, you can have all of the mistakes and all of everything, but she’s a woman. She’s head and shoulders above anyone else. Come on.

AMY GOODMAN: But we will, of course, continue to follow this race very closely. The primary in New Hampshire is Tuesday night. Bertha Lewis with The Black Institute and New York Working Families Party, thanks so much, and Lee Fang, investigative journalist at The Intercept.

LEE FANG: Thank you for having me.

AMY GOODMAN: When we come back, we go across the pond to see what has happened with this U.N. committee that has said that Julian Assange should be able to walk free. Stay with us. 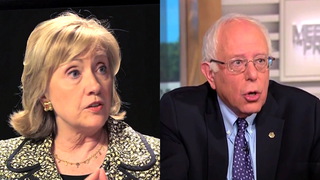