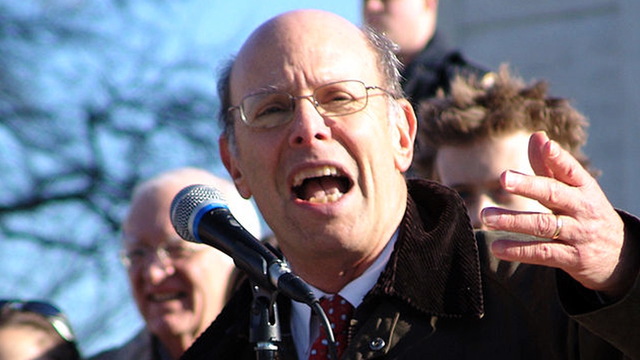 Democracy Now! will air a special live stream tonight of the public memorial for Michael Ratner, a pioneering attorney who headed the Center for Constitutional Rights. The live stream will begin at 7 p.m. EDT.

Michael Ratner died on May 11 at the age of 72. For over four decades, the trailblazing attorney defended and spoke up for victims of human rights abuses across the world. He sued presidents and dictators. In 2002, Ratner and the Center for Constitutional Rights brought the first case against the George W. Bush administration for the indefinite detention of prisoners at Guantánamo. The Supreme Court eventually sided with the center in a landmark 2008 decision when it struck down the law that stripped Guantánamo prisoners of their habeas corpus rights.

Democracy Now! Coverage on the Life & Legacy of Michael Ratner
Remembering Michael Ratner, Pioneering Lawyer Who Fought for Justice from Attica to Guantánamo

Julian Assange: Michael Ratner was a “Campaigner for Justice” from Guatemala to Palestine

StoryJun 20, 2022Juneteenth Special: Historian Clint Smith on Reckoning with the History of Slavery Across America
The original content of this program is licensed under a Creative Commons Attribution-Noncommercial-No Derivative Works 3.0 United States License. Please attribute legal copies of this work to democracynow.org. Some of the work(s) that this program incorporates, however, may be separately licensed. For further information or additional permissions, contact us.

Juneteenth Special: Historian Clint Smith on Reckoning with the History of Slavery Across America