“Our Nation is Under Attack”: Lawmakers Push Laws to End “Scourge of Gun Violence on Our Streets”

On Tuesday night, hundreds of people gathered at a church in Orlando, Florida, to mourn the 49 victims of Sunday’s attack on an LGBT nightclub, the deadliest mass shooting in modern U.S. history. Following the massacre, President Obama called for the reinstatement of the assault weapons ban and measures to prevent suspected terrorists from obtaining guns. One of the two guns used by Orlando shooter Omar Mateen was an AR-15 semiautomatic assault rifle, the same style used in the massacres in San Bernardino, California; Aurora, Colorado; and Newtown, Connecticut. On Tuesday, Democratic members of the House Judiciary Committee signed a letter pushing legislation to reinstate a lapsed ban on automatic assault weapons. The lawmakers wrote, “Make no mistake about it: our nation is under attack. We are under attack by the scourge of gun violence—on our streets and in our homes, on a daily basis.” We speak to one of the signatories of the letter, Rep. Hank Johnson (D-GA).

JUAN GONZÁLEZ: On Tuesday night, hundreds of people gathered at a church in Orlando, Florida, to mourn the 49 victims of Sunday’s attack on an LGBT nightclub, the deadliest mass shooting in modern U.S. history. Following the massacre, President Obama called for the reinstatement of the assault weapons ban and measures to prevent suspected terrorists from obtaining guns. One of the two guns used by Orlando shooter Omar Mateen was an AR-15 semiautomatic assault rifle, the same style used in the massacres in San Bernardino, California; Aurora, Colorado; and Newtown, Connecticut.

AMY GOODMAN: We begin today’s show in Washington, D.C., where we’re joined by Georgia Congressmember Hank Johnson. On Tuesday, he and other Democrats on the House Judiciary Committee signed a letter to committee chair Bob Goodlatte to consider legislation to reinstate a lapsed ban on automatic assault weapons. In the letter, the lawmakers write, quote, “Make no mistake about it: our Nation is under attack. We are under attack by the scourge of gun violence—on our streets and in our homes, on a daily basis,” unquote.

REP. HANK JOHNSON: Yes, it’s a pitiful shame that here in America at this time it’s easier to buy an assault weapon than it is to board an airplane. You have to go through all kinds of security and have all kinds of ID in order to fly, but in order to buy, all you need is an internet connection or a entry into what’s called a gun show, where you can buy from an unlicensed firearm dealer, and you don’t have to go through a background check. And so, that’s called the gun show loophole, and it allows these assault weapons to proliferate on the streets of America. And we’re seeing a proliferation of homicides and mass murders that are committed with these high-capacity assault weapons, that were made and manufactured to kill people in mass numbers quickly. And so we need to replace the ban on assault weapons that expired in 2004, and we need to reinstate that ban, so that we can start getting a handle on the proliferation of these assault weapons on the streets of America.

JUAN GONZÁLEZ: And, Congressman Johnson, why specifically was the law allowed to lapse? And what has been the lineup in the battle to get it reinstated?

REP. HANK JOHNSON: Well, it was the pressure on lawmakers by the National Rifle Association, which represents gun manufacturers and gun retailers. They have contributed so much money, largely to the Republican Party or members of the Republican Party. About 83 percent of their funding goes to Republicans for Congress. And with that kind of influence, with that kind of money in politics, it has resulted in the NRA being able to prevail when it comes to commonsense gun regulation. They support no effort to control firearms in the hands of anyone in this country. And so, until we can break the back of the NRA lobby and get that dark money out of politics and do something about campaign finance reform, we’re going to have these anomalies that continue to exist in America. And people are dying as a result of these policies, or the lack of policy, by Congress. And it’s something that we need to change.

AMY GOODMAN: There’s a joke going around online, and I hate to joke on a day like this, but it says, “'Can I get two boxes of Sudafed?' 'Sorry, by law, you can only buy one at a time.' 'OK, then just the one box of Sudafed and these seven guns.'”

REP. HANK JOHNSON: Well, it’s a fact of life that one can go into a gun show and purchase unlimited amounts of weaponry and ammunition and high-capacity clips, no questions asked. This is the 21st century. This is the year 2016 in America. And after repeated mass murders at the hands of persons wielding assault weapons, when will we wake up and take action? Just simply doing a moment of silence every time something like this occurs in Congress has appeased some lawmakers. Some of them think that that’s all that we need to do. But I think the American public are starting to wake up. They want us to take action. If—if we are to do our jobs, we must take these kinds of situations, like that which occurred in Orlando, and use them to galvanize public opinion and public pressure on these recalcitrant lawmakers who are in the pockets of the NRA and, quite frankly, are afraid to move without permission. It’s time to act. It’s time to act now.

And it’s not just these mass murders. There are just instances of homicides throughout the country, single people, two people being killed at a time. We can’t forget about those. It’s easy to look away from those that are occurring every weekend in cities and in towns throughout America. People are losing their lives to gun violence. Guns are ending up in the hands of people who have no right—or should have no right—to possess them. And so, without any kind of regulations, we will continue to see this influx of weaponry onto the streets. We will see misuse of that weaponry, and innocent people will lose their lives as a result. And so, Congress has a responsibility to stand up and do something about it.

JUAN GONZÁLEZ: Congressman, I wanted to play for you part of Donald Trump’s remarks on Monday following the Orlando massacre.

DONALD TRUMP: When I’m elected, I will suspend immigration from areas of the world where there is a proven history of terrorism against the United States, Europe or our allies, until we fully understand how to end these threats. … We cannot continue to allow thousands upon thousands of people to pour into our country, many of whom have the same thought process as this savage killer.

REP. HANK JOHNSON: Well, conveniently for Donald Trump, he wants to forget that this individual who perpetrated the mass murder in Orlando is an American-born American citizen. And most of the mass murders that have taken place in America since the removal of the assault weapons ban in 2004—and, in fact, before then—most of the perpetrators have been American-born. And so, it’s wrong to try to demonize refugees, people trying to escape mass murder, mass incarceration in their home countries. It’s wrong to blame those people for the scourge of violence that is happening in America. 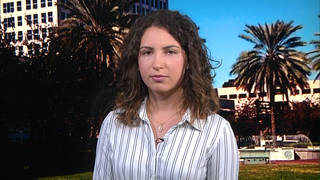