On Wednesday, 23 people were arrested protesting Spectra Energy’s fracked gas pipeline in West Roxbury, Massachusetts. Longtime climate activist Tim DeChristopher was one of about 30 people who ventured onto the Spectra pipeline construction site in an attempt to nonviolently stop work. Local residents and politicians have long opposed the West Roxbury Lateral pipeline, which they say is dangerous for the pipeline to run alongside a quarry where there is frequent blasting. During the action, DeChristopher and 11 others climbed inside the pipeline trench and refused to budge for almost two hours before being forcibly removed by firefighters. DeChristopher drew a comparison between the trenches of the gas pipeline and the mass graves recently dug in Pakistan in anticipation of a climate-fueled heat wave.

StoryDec 24, 2019Jane Fonda Arrested: We Are in a Climate Emergency. I Have No Choice But to Put My Body on the Line

AMY GOODMAN: Tim DeChristopher, you initiated this action. You gave this speech, an excerpt of which we just played, where you compared the trenches to the mass graves in Pakistan. Explain.

TIM DECHRISTOPHER: Yeah. You know, I mean, as you and, I think, probably a lot of your listeners know, I’ve been doing climate work for a long time and have been following a lot of the escalating disasters that we have been witnessing, and have spent a lot of time thinking about kind of where we’re headed, you know, and I consider myself pretty—pretty open to just the level of hardship and suffering that we’re moving towards. And yet, when I read that article last month about digging anticipatory mass graves in Pakistan, which, to my mind, is the first case of anticipatory mass graves, of just kind of accepting that, you know, we know we’re going to need mass graves, because we know we’ve entered this age where these disasters are going to happen. When I read that, it just—

TIM DECHRISTOPHER: Yes, and that just broke my heart in a whole new way, you know, after having it broken so many times from the news of climate change, and it just really weighed on me and wouldn’t let go. You know, it was one of those things that just settled deeply into my heart, and I felt really compelled to take action, connecting those dots, because when I looked at those pictures of this long mass grave trench that they’re digging in Pakistan, one of my first thoughts was, “My god, that looks exactly like what they’re digging in West Roxbury to lay a pipeline.” And, of course, these things are connected, not just in their shape, but in one causing the other. And so, it felt something that was very personal and emotional for me. And even when I was giving that speech yesterday, I was getting very emotional. And, you know, in the workshops and trainings that I do with activists around the country, I always tell people that we’re at our most powerful when we’re sharing our deepest personal truth, that when we’re most authentic is when we’re most powerful. And this, for me, was something that—was something that I was genuinely torn up about, and so that’s why I felt so called for this to be my first civil disobedience action after I just got off probation a couple months ago.

AMY GOODMAN: After you served almost two years in prison, you just got off probation in April. Are you willing to go back to prison again?

TIM DECHRISTOPHER: Yes, I am. You know, I don’t know how likely that is in this case. We did get charged with a few charges, including resisting arrest. But, you know, at this point, there’s been almost 150 people arrested in this ongoing, sustained resistance campaign against the West Roxbury pipeline, and all of those charges have been reduced to civil infractions or dismissed, you know, because the city of Boston is actively opposed to this pipeline, and that’s whose court we’re ending up in. You know, as Karenna mentioned, literally every elected official at every level, other than the president and the governor, who represent that neighborhood are opposed to this.

AMY GOODMAN: We’re going to have—

AMY GOODMAN: We’re going to have to leave it there, but we’ll continue to cover this story. Tim DeChristopher and Karenna Gore, thanks so much for being with us.

And that does it for our show. I’ll be speaking in Chicago tomorrow night, Friday night, at 7:30 at the Hyatt Regency McCormick Place. Check our website, democracynow.org.

Congratulations to Democracy Now!’s general manager Julie Crosby and Rebecca Wallach on the birth of their daughter Ava Lea Crosby-Wallach, born on June 24th. Welcome to the world, Ava Lea.

I’m Amy Goodman. This is Democracy Now! We have job openings. Check our website.

Jane Fonda Arrested: We Are in a Climate Emergency. I Have No Choice But to Put My Body on the Line 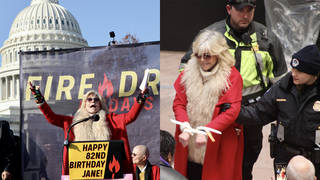 Jane Fonda Arrested: We Are in a Climate Emergency. I Have No Choice But to Put My Body on the Line