Why Did Clinton Just Tap a Pro-TPP, Pro-KXL, Pro-Fracking Politician to Head Her Transition Team?

Hillary Clinton has announced former Interior Secretary Ken Salazar as the head of her transition team. Salazar is a former U.S. senator from Colorado who now works at WilmerHale, one of the most influential lobbying firms in Washington. Some groups have criticized Salazar’s selection due to his vocal support of fracking, the Trans-Pacific Partnership and the Keystone XL pipeline. In addition to Ken Salazar, other leaders of the transition team include former Obama National Security Adviser Tom Donilon, Center for American Progress head Neera Tanden, former Michigan Governor Jennifer Granholm and Maggie Williams, the director of Harvard’s Institute of Politics. For more, we speak with David Sirota, senior editor for investigations at the International Business Times.

JUAN GONZÁLEZ: Hillary Clinton has announced former Interior Secretary Ken Salazar as the head of her transition team. Salazar is a former United States senator from Colorado who now works at WilmerHale, one of the most influential lobbying firms in Washington. Some groups have criticized Salazar’s election, due—or, his selection, due to his vocal support of fracking, the Trans-Pacific Partnership and the Keystone XL pipeline. Molly Dorozenski of Greenpeace USA said, “If Clinton plans to effectively tackle climate change, the last thing her team needs is an industry insider like Ken Salazar. Salazar’s track record illustrates time and again that he is on the side of big industry, and not of the people. His most recent opposition to the anti-fracking initiatives in his home state of Colorado directly undermines Clinton’s alleged support of local control over fracking.”

For more, we’re joined by David Sirota, senior editor for investigations at the International Business Times, joining us from Denver Open Media in Denver, Colorado, the home state of Ken Salazar.

Welcome to Democracy Now!, David. Well, start off by talking about this selection of the former interior secretary, former Colorado Senator Ken Salazar, to head the transition team of Hillary Clinton.

JUAN GONZÁLEZ: Well, as we mentioned, for years, Ken Salazar has been a vocal proponent of fracking. In 2014, he said, quote, “We know that, from everything we’ve seen, there’s not a single case where hydraulic fracking has created an environmental problem for anyone. We need to make sure that story is told.” And this is Ken Salazar speaking about fracking in 2011, when he was still interior secretary.

INTERIOR SECRETARY KEN SALAZAR: I think hydraulic fracking is very much a necessary part of the future of natural gas, because without this new technology, the amount of natural gas that we have available here in the country is a very diminished amount. And I think hydraulic fracking can be done in a safe way, in an environmentally responsible way and in a way that doesn’t create all of the concerns that it’s creating across the country right now.

JUAN GONZÁLEZ: Dave Sirota, what about this, his position on fracking?

DAVID SIROTA: Well, I mean, you’ve heard it there. I mean, Ken Salazar comes from Colorado and a part of the Colorado political establishment that supports fracking in a very aggressive way. The business community here supports the—supports fracking in a very aggressive way. We’ve had fights at the local level, where cities and towns have voted to ban or restrict fracking, and the state government has tried to use its power to effectively disenfranchise those communities from using that power to block or restrict fracking. There’s now a ballot measure on the ballot to further restrict fracking. Ken Salazar has come out against that, been one of the icons in the political establishment against that. So, he is somebody who is very close to the oil and gas industry, and somebody who has been a big defender of fracking, in the face of evidence that there are reasons to be concerned about the environmental and public health effects of that process.

DAVID SIROTA: Yeah, they represent corporate clients across the board—Cigna, for instance. Cigna is a healthcare giant that is fighting for a merger with Anthem. WilmerHale represents them, Delta Airlines, Verizon, investment firms, a mining company. So, WilmerHale is a major law and lobbying firm. Ken Salazar is not a registered lobbyist at WilmerHale; he is a partner there. Interestingly enough, Hillary Clinton had published a year ago an op-ed deriding the revolving door where lawmakers leave office and become lobbyists or help special interests. And she had specifically said that she was concerned about lawmakers who go into that line of work, public policy work, for corporate clients, but do not register as a lobbyist, which seems to fit the description of Ken Salazar.

JUAN GONZÁLEZ: And also, the other appointees seem to be largely either former Obama officials or close confidants of Hillary Clinton, on the top transition team. Your sense of this sort of lack of an open tent, in terms of creating a transition team that would win support of other Americans?

DAVID SIROTA: Well, look, Hillary Clinton campaigned as a progressive, increasingly so facing the primary challenge from Bernie Sanders, and so I think there was some hope by folks that her transition team and her administration will reflect something that’s a little bit different from what people have come to believe is Clintonism, and more progressive perhaps than the Obama administration. This transition team seems to suggest more of continuity with the establishment, that the people who primarily are leading this are people who come out of the Obama administration, come out of the wing of the Democratic Party that is close to the business community, that is generally understood to be the establishment. So, we haven’t seen the policy yet, but if personnel is policy, this looks like a signal to the establishment that this is a continuity kind of government that’s going to be put out there—

DAVID SIROTA: —not necessarily one that [inaudible]—

AMY GOODMAN: Let me ask you—last November, Ken Salazar, along with another former interior secretary, Bruce Babbitt, co-wrote a piece in USA Today backing the TPP. They wrote, quote, “The TPP is a strong trade deal that will level the playing field for workers to help middle-class families get ahead. It is also the greenest trade deal ever.” Those are the words of, well, Ken Salazar, the new transition team head for Hillary Clinton.

DAVID SIROTA: Yeah, I mean, that’s a very important op-ed for people to understand right now, especially when there are fears that Hillary Clinton will ultimately back a version of the Trans-Pacific Partnership if she becomes president. She has said she is against it, but prior to running for president, she had been helping the Obama administration push that trade deal. And so, her transition chief is somebody who has been very publicly out there, since leaving government, pushing that deal on environmental grounds. Of course, in that deal, there are provisions that may make it easier for America to export fracked gas across the globe, so that this, I think, complicates the questions of where Hillary Clinton and her administration may be on trade agreements like the Trans-Pacific Partnership.

AMY GOODMAN: In 2014, Ken Salazar also pushed for the construction of the Keystone XL pipeline, telling the Associated Press he believed construction could, quote, “be done in a way that creates a win-win for energy and the environment.” David Sirota?

DAVID SIROTA: Yeah, I mean, again, what we see from Ken Salazar’s record is somebody who is very close to big energy interests in—that have business before the federal government. What does it mean for the future, when another pipeline proposal, for instance, comes down the pike? We don’t know. But what we do know is that he will have a very serious hand in helping staff the Clinton administration, that he will have a hand in helping put personnel into the administration across the federal government. Whether he has litmus tests, whether he brings in people who he’s close to from his own politics, that will be a question. It will be a big question for Hillary Clinton.

AMY GOODMAN: David, you have written a lot about the Clinton Foundation. Now, a lot of the news this week centers around the emails of Hillary Clinton. The State Department has agreed to provide the conservative watchdog group Judicial Watch with emails that had been uncovered following the FBI’s probe into Hillary Clinton’s use of the private email server from 2009 to 2013, her tenure as secretary of state. And we know some of these emails relate to the Clinton Foundation. Can you talk about the significance of this?

AMY GOODMAN: David Sirota, thanks so much for being with us, senior editor for investigations at the International Business Times. We will link to your articles at democracynow.org.

This is Democracy Now! When we come back, we’ll be joined by Danny Glover and the well-known anti-police brutality activist Larry Hamm, talking about Hillary Clinton, U.S. politics and police brutality. Stay with us. 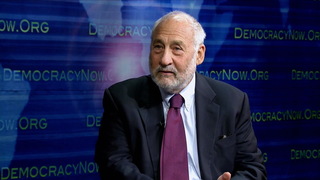 Will Hillary Clinton Flip-Flop Again on TPP After Election Day? We Ask Her Adviser Joseph Stiglitz