Donald Trump’s presidency is less than a week old, but some attorneys say a case for impeachment can already be made. We speak to John Bonifaz, who says Trump has violated a part of the U.S. Constitution that bars Trump from receiving payments from foreign governments. The effort is being led by Free Speech for People and RootsAction.

AMY GOODMAN: I want to turn to John Bonifaz, who’s an attorney and political activist specializing in constitutional law and voting rights, co-founder and president of Free Speech for People, one of the organizations that launched the “Impeach Donald Trump Now” campaign just moments after Trump’s inauguration. More than 200,000 people from across the country have already joined the campaign.

John, talk about what you are calling for right now.

The presidency is not a profit-making enterprise for its occupant. It is a public office, and the president is a public servant. And the president, this president, does not seem to understand that concept. He is engaged in businesses all over the world. He has refused to divest from his businesses. And as a result, he has serious conflicts of interest, from all the foreign payments he’s receiving from foreign governments and from the domestic payments, from state governments and from the federal government, that collide directly with the Constitution. He swore an oath of office to protect and uphold the Constitution. He’s already violating it. And this impeachment investigation must proceed.

AMY GOODMAN: You know, it’s interesting, John. In 2014, Donald Trump talked about the prospects for impeaching Obama, tweeting, quote, “Are you allowed to impeach a president for gross incompetence?” Your response?

JOHN BONIFAZ: Well, maybe he was projecting on what might happen if he became president. But look, this is a president who does not obey the Constitution. He defies the rule of law. No one in this country is above the rule of law, no matter how powerful he or she may be, and that includes the president of the United States. That is a bedrock principle of our democracy. And that’s why we launched with RootsAction the campaign at ImpeachDonaldTrumpNow.org. And we already have, as you mentioned, 200,000 people around the country join this campaign. I think it’s only a matter of time before a member of Congress introduces our proposed resolution—it’s on our site—starting an impeachment investigation. But we have to hold this president accountable.

AMY GOODMAN: How many signatures do you have right now?

AMY GOODMAN: How many signatures do you have right now?

JOHN BONIFAZ: Nearly a quarter of a million, and counting, at ImpeachDonaldTrumpNow.org. And, you know, the point on this is that when a president engages—

JOHN BONIFAZ: I think people need to join this campaign from all over the country to uphold our Constitution and the rule of law at ImpeachDonaldTrumpNow.org. It’s time we demand accountability and impeach this president. 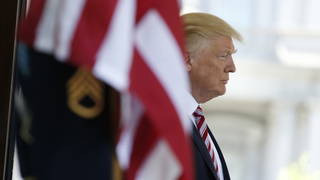