On Tuesday, former CIA Director John Brennan testified to the House Intelligence Committee that he had growing concerns last year that Trump’s campaign may be colluding with Russian officials to influence the 2016 election—and that the Russians might lead Trump officials down a “treasonous path.” Trump has now hired a lawyer to represent him in the ongoing investigation, which has sparked mounting calls for Trump’s impeachment. For more, we speak with John Bonifaz, co-founder and president of Free Speech for People, one of the organizations that launched the “Impeach Donald Trump Now” campaign just moments after Trump’s inauguration.

AMY GOODMAN: John Bonifaz is also with us, Free Speech for People. John, you came on Democracy Now! like within a week of the inauguration, calling for the impeachment of Donald Trump. How have things changed? You focused on violations of the Emoluments Clause at the time. Explain what your concern was with that. And is that still what you feel is grounds for impeachment?

JOHN BONIFAZ: Amy, thank you for having me. I’m honored to be on with Congressman Green and with you this morning.

We have launched this campaign with RootsAction on the day of the inauguration at ImpeachDonaldTrumpNow.org. More than 1 million people all across the country have called for this impeachment investigation in light of the president’s direct and ongoing violations of the anticorruption clauses of the Constitution. His refusal to divest fully from his business interests placed him on a collision course with the Constitution from the day he took the oath of office. But we have since expanded the grounds for our call for an impeachment investigation to include obstruction of justice, in light of the shocking revelations that the president fired the FBI director to try to stop a criminal investigation that may incriminate him as well as other associates in his campaign.

Congressman Green is an American hero. He’s standing up for our Constitution and our democracy at this critical moment in our history. And we’re urging people all across the country to join us at ImpeachDonaldTrumpNow.org, to stand with him and to make sure that this president be held accountable via the impeachment process.

AMY GOODMAN: So how does this move forward right now, John Bonifaz?

JOHN BONIFAZ: I think it’s incumbent upon all of us all around the nation who believe in our Constitution and the rule of law and democracy, that no one, not even the president of the United States, is above the law, that we stand up, that we stand with Congressman Green, that we call on our members of Congress to join him in making this call to issue an impeachment resolution and start the process in the United States House of Representatives.

I know there are people who are saying, “Well, we need to get the facts out.” And we do need to get the facts out. But as Congressman Green has eloquently stated, we need—we already have these facts. They’re talking about getting other facts. The facts are out on obstruction of justice. The facts are out on the violations of the anticorruption clauses of the Constitution.

And we’re dealing right now with a constitutional crisis, in which this president is openly defying the rule of law in our Constitution. So, people all across the country need to stand up. Nine communities, including the Los Angeles City Council, have already passed resolutions calling on Congress to take this action. Brookline Town Meeting in Brookline, Massachusetts, is going to vote this Thursday on this question. And many other communities in the weeks ahead will do that, as well. And people can go to our site at ImpeachDonaldTrumpNow.org. They can download a local resolution and have it passed in your community. Hold an impeachment town hall, as Congressman Green did this past Saturday, and get your community talking about this critical question of our time. This is about our Constitution. It’s about our democracy. And we all need to stand up.

AMY GOODMAN: Congressman Al Green, have Republicans come to you in support, any of your—any of the Republican congressmembers?

REP. AL GREEN: Well, I’ve had Republicans to say to me that they oppose these ugly things that have been said. I have not had any Republicans to tell me about the resolution that I’m proposing or the impeachment effort. And that’s because I have not asked. I have intentionally not approached colleagues on this issue. This is a question of conscience for me. And I hope that my colleagues will approach it as I have, but I will not ask anyone to do this. I’m not lobbying anyone. I have concluded that this has to be done, and my hope is that others will see things similarly. But if they do not, I will understand. I think the people of the United States of America, as John has indicated, have to get involved. It’s a participatory democracy. If the people will advance their will, the will of Congress will be advanced.

AMY GOODMAN: The Hill has reported that Congressmember Justin Amash of Michigan, Republican, admitted Trump may have committed an impeachable offense if he asked FBI Director James Comey to drop the FBI’s investigation into Flynn. Amash is at least the second Republican openly to say Trump may have committed an impeachable offense. Also Republican Congressman Carlos Curbelo did, from Florida, said this on CNN last week. Your thoughts on this, Al Green?

REP. AL GREEN: Well, thank you, Amy. I think a good many people see the obstruction of justice, and a good many people understand that obstruction of justice is impeachment. I think it’s beneficial that three members of the Republican Party have given these indications. But I also understand that there are a good many members who will be silent until given the opportunity to vote. And at that point, they will voice their opinions. My hope is that they will have heard from enough of their constituents, so that they better understand the will of the people. I think the will of the people will prevail. It’s just a matter of making sure people understand what the issues are.

And finally, this, on this question of others, I believe that others who desire to speak up will have the opportunity to do so as more things come out, as there’s more evidence presented. I think that we haven’t seen the last of this evidence that is ultimately going to be presented. But I also know that we already have enough to impeach, because of the firing and because the president confessed on national television that he did it because of the investigation.

AMY GOODMAN: Well, Texas Congressmember Al Green, John Bonifaz of Free Speech for People, thanks so much for joining us.

AMY GOODMAN: We’ll continue to follow your actions on the floor of the House, Congressman Green, and this whole impeachment movement around the country.

This is Democracy Now! When we come back, we’ll go to London to speak with Tariq Ali about the suicide attack at the Manchester arena. Stay with us. 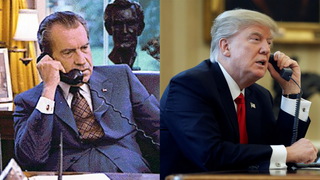