Former Watergate Prosecutor: We Need Officials Who Will Stand Up to Trump

More than 100 employees of the State Department have signed on to drafts of a dissent memo that condemns Trump’s executive order. One draft of the memo reads, “This ban stands in opposition to the core American and constitutional values that we, as federal employees, took an oath to uphold. … We have a special obligation to maintain an immigration system that is as free as possible from discrimination, that does not have an implied or actual religious tests, and that views individuals as individuals, not as part of stereotyped groups.” As news of the dissent memo broke Monday, White House Press Secretary Sean Spicer threatened State Department officials, saying they should quit their jobs if they have a problem with Trump’s “program.” We speak to Elizabeth Holtzman and Jill Wine-Banks.

StoryJan 19, 2017On Final Day of Obama Presidency, a Look at His Mixed Legacy & the Rise of Neo-Fascism in Washington

AMY GOODMAN: More than a hundred employees of the State Department have signed on to drafts of a dissent memo that condemns Trump’s executive order. White House Press Secretary Sean Spicer threatened State Department officials, saying they should quit their jobs if they have a problem with Trump’s “program.”

PRESS SECRETARY SEAN SPICER: We’re talking about 109 people from seven countries that the Obama administration identified. And these career bureaucrats have a problem with it? I think that they should either get with the program or they can go.

JILL WINE-BANKS: That’s an interesting issue that came up during the Saturday Night Massacre. And there was debate whether the office had been fired, all of us, or whether only Archie Cox had been fired. And we debated in the office whether we should resign in protest. And Archie advised us that that would be absolutely wrong, that we knew the case, that we should never resign. If we were fired, that was a different story, but that we needed to stay and do our job. And I agree exactly with what Liz has said and with what the acting attorney general testified to, which is that the lawyers who are involved in this have to act in accordance with their ethics and enforce the law and act in accordance with the Constitution. And we need people who will stand up and say, “You cannot do this.” There are some things that can be altered in a way that makes it legal, but there are some things that simply cannot be done, and someone has to be strong enough and courageous enough to tell the president when he cannot do what he’s proposing.

JUAN GONZÁLEZ: And what would be your advice to now the incoming attorney general, Jeff Sessions, on handling this situation?

JILL WINE-BANKS: Well, first of all, he hasn’t been voted in yet. And this episode may have an impact on the courage of people to vote against him. We need someone who will say what is legal and what isn’t legal, and won’t blindly follow what the president says, because, in both cases, that’s what got people into trouble. So he may not get confirmed. But if he does, my advice would be that he has to be willing to risk his job to tell President Trump that he cannot do certain things, that they exceed the constitutional boundaries for presidential action.

AMY GOODMAN: Just to be clear on what happened back in 1973, the headline in the papers—and for our viewing audience, we’re showing this newspaper right now: “Nixon Discharges Cox for Defiance; Abolishes Watergate Task Force; Richardson and Ruckelshaus Out.” Interestingly enough, right under that, a little sub-headline: “Kissinger Meets Brezhnev on Mideast Cease-Fire Plan.” So the Middle East and Russia were in this picture then, as well. But, Jill Wine-Banks, talk about the drama of that night, first what—how each person was forced out.

JILL WINE-BANKS: Well, there’s still a debate. And I’ve talked to Ruckelshaus, and he both was fired and resigned. And the same is supposedly true of Richardson. Both Richardson and Ruckelshaus felt that Cox had done absolutely nothing that was not within his charter, that all of his actions were proper and that it would be illegal and against what they had testified to in getting confirmed to their offices. They had promised that they would not fire him except for cause. They did not believe there was any cause, and that they could not, therefore, carry out the president’s order. They were willing to resign rather than do that. The president fired them. So, they were both fired and resigned. They acted in accordance with their conscience.

I’d also like to point out to Sessions and to all other appointees that Bork, who carried out the order, ended up having his career shortened. He was never confirmed to the Supreme Court, largely because of his actions during Watergate and in firing Cox. So there are consequences for carrying out what are illegal orders.

JUAN GONZÁLEZ: And, Liz Holtzman, the impact of the Watergate hearings, given the fact—I mean, this was before cable, before the internet, and the hearings were broadcast on the networks nationwide. The impact of those hearings on the public consciousness?

ELIZABETH HOLTZMAN: —and the firings, resignations of the top Justice Department officials. The hearings galvanized the country. The hearings were bipartisan. The House Judiciary Committee voted on a bipartisan basis for three articles of impeachment. The country, which had overwhelmingly supported Nixon’s re-election by a landslide margin—not the margin that this president got, but one of the biggest landslides in the history of this country—saw that the rule of law had to govern. And the American people decided, more important than a president, more important than a party, more important than a policy was the rule of law and the Constitution.

I want to say one other thing that’s really important to remember. The Saturday Night Massacre, firing the attorney general, firing the deputy attorney general, triggered the impeachment hearings against Richard Nixon, which is what brought him down in the end. So, this is something that should make the American people sit up and take notice. We have a president who is not willing to listen as to what the law requires and what the Constitution requires. That’s the real message here. And the danger is for our rule of law and the constitutional rule for our democracy.

AMY GOODMAN: And President Trump and Stephen Bannon, very clearly strongly in charge right now in the White House, being appointed to the National Security Council as a principal and telling the generals that they no longer have to come—

AMY GOODMAN: —and they are no longer principals on the committee?

ELIZABETH HOLTZMAN: Correct. Well, I don’t know if they were taken away as being principals, but the generals were told they don’t have to come when certain issues are being discussed.

I want to say one other thing. I helped, along with Ted Kennedy, to write the Refugee Act of 1980. And we wrote that law in the wake of the huge crisis that happened when the boat people fled Vietnam. First of all, the United States of America took over 750,000—750,000 people. We were a smaller country at that time. Americans weren’t quaking in their boots. We weren’t scared something terrible was going to happen to us. We took them and welcomed them with open arms. It was one of the most important and successful resettlement efforts of refugees in the history of the world. And that law was designed to abolish discrimination in admission of refugees on any basis. He must be turning in his grave now. The two of us wrote that law in 1980. And it’s being disgraced now.

AMY GOODMAN: Well, we want to thank you both for being with us. Liz Holtzman, former U.S. congressmember, served on the House Judiciary Committee that voted to impeach Richard Nixon. We also want to thank Jill Wine-Banks, assistant Watergate special prosecutor and the first woman to serve as U.S. Army general counsel.

This is Democracy Now! When we come back, Sarsour v. Trump. It’s the broadest lawsuit against Donald Trump around the immigration and refugee ban yet. Stay with us. 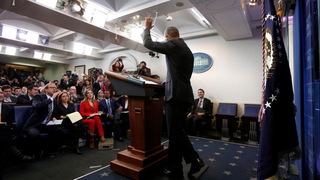