Rep. Grijalva: Power of the People Key to Stopping Repeal of Obamacare & Worst Instincts of Trump

We get response from Rep. Raúl Grijalva (D-Arizona) to Republican congressmembers’ efforts to make it easier for Congress to cede federal control of lands, repeal Obamacare and dismantle the independent Office of Congressional Ethics. “Those of us that are in Congress that are opposed to what’s going on are a voice,” Grijalva says. “But the real power in holding back some of the worst instincts of Trump and the majority in the House and in the Senate is going to come from people themselves.”

StoryJan 09, 2017Repeal & Run? Republicans Move to Axe Obamacare, But What Will Replacement Look Like?

JUAN GONZÁLEZ: Well, I wanted to go back to Representative Raúl Grijalva and talk about—a little bit about what’s going on in Congress right now. On Tuesday, the House Republicans changed the way that Congress calculates the cost of transferring federal lands to states and other entities, that would make it easier for members of the new Congress to cede federal control of lands. You’re the ranking Democrat on the Natural Resources Committee. Your response to this and what it means?

REP. RAÚL GRIJALVA: Yeah, those rules that were put in place, I think, by the majority yesterday in the House, while all the concentration was on the ethics issue and how badly they handled that and how badly they had to retreat from that, in those rules were also—no longer are you going to score land transfers. So, if you take a piece of federal land in Arizona, cede it over to—transfer it to the state of Arizona or a particular county, there will be no Congressional Budget Office analysis of what cost is to the taxpayers, in general, of this country in terms of that transfer. And so, it would be counted as a zero. So that facilitates the transfers. In the past, you know, because of rules and laws, there had to be an exchange of either equal value or the cost involved in that exchange. Now, with that being eliminated, it makes that whole “give the federal land back to the states” movement a shot in the arm, because the groundwork has been set now for them to transfer it without having to follow their own rule which they set in place, which is to have a CBO score to make sure that it’s not a gift and to make sure that the taxpayer was being protected. That facilitates it, and it sets the groundwork for those kinds of transfers to states and counties down the road.

AMY GOODMAN: Congressman Grijalva, we saw something incredible yesterday. You had this surprise the day before, on the eve of the first session of this Republican Congress, a closed-door meeting, behind closed doors, the Republican Conference voting to gut the ethics office. But then, because of enormous outcry, which I think prompted Donald Trump’s tweet that even he did not support this, they were forced to back down. What does this bode? We’ve seen this. We’ve seen the enormous outcry when the Trump transition team asked the DOE, the Department of Energy, for a list of names of those who attended—

AMY GOODMAN: —the U.N. climate summits. When this happened, when there’s backlash, they back down. Talk about what this means and what—how you reacted yesterday.

REP. RAÚL GRIJALVA: Well, the reaction was that, you know, while they were making the swamp even murkier in D.C., they proved that they have a tin ear, that this whole election was about railing against government and railing against corruption, and then, come the first action that they were going to take, was to gut the ethics office and, in doing so, protect themselves from any potential charges, be it staff or be it constituent. So, we go forward, and they had to back out, not so much because of the tweet, because of a flood of calls, emails and appeals that hit every office in Congress yesterday. That was the reason.

And I think what it bodes for the future, Amy, is that this is the way to be able to affect, to resist and to stop some of the worst instincts that this Congress is going to have. That’s an example of a bad instinct. And they have many of them. And so, what—when the public comes into the discussion, when they are part of it, when they put that kind of pressure on—and that’s part of the strategy that I think, going forward, is so important. Those of us that are in Congress that are opposed to what’s going on are a voice. But the real power in holding back some of the worst instincts of Trump and the majority in the House and in the Senate is going to come from people themselves. And I think that bodes well, and that is a good example of how that should be done.

JUAN GONZÁLEZ: And, Congressman Grijalva, I’d like to ask you about one of the Trump appointments, Scott Pruitt, to head the Environmental Protection Agency. You’ve introduced earthquake prevention bill to call attention to the fracking crisis in Pruitt’s own home state of Oklahoma. Your response to this appointment?

REP. RAÚL GRIJALVA: Well, you know, that appointment, for working people, for poor people, for the working poor, is a disaster, a disaster in the terms of undoing everything from overtime rules to family leave, a huge opponent, an extreme opponent, of any minimum wage raises, a huge opponent of wage and benefit investigations and enforcement. And basically, you have put the real fox in the chicken house when it comes to the protections of workers and the protections of their hard-earned dollars. And I think when we see—as this department unfolds and other political appointments come in, you’re going to see that this is not—this department is not there for the protection and the benefit of working people and labor. It’s going to be there to undo and hand over more and more control to employers, not only at the corporate level, at the corporate level and down, and undo regulations around health and safety, OSHA. All the things that this man has complained about consistently are going to be part of it.

AMY GOODMAN: And, Congressman Grijalva, we just have 30 seconds, but the first act, they’re saying, is to repeal Obamacare. What does that mean? What will replace it? Do you see people losing their insurance? Or will they back down?

REP. RAÚL GRIJALVA: Well, I think this is one in which they’re going to have to back down. You can’t just repeal. You need to tell the American people. And Democrats should not participate in that discussion. Tell us what your replacement is. Tell us how you’re going to take care of 22 million people that have insurance for the first time in their lives. Tell us how that cost transfer is not going to affect every wage earner in this country. Tell us how you are going to replace it. I think they’re going to have a very difficult time coming up with a replacement that deals with pre-existing conditions, that deals with subsidies for poor people and working people. I don’t know how they can come up with it. But right now, to say repeal is easy. To provide a replacement, which the American people are going to demand, is going to be difficult, if not impossible.

AMY GOODMAN: Congressman Grijalva, we want to thank you for being with us—

AMY GOODMAN: —a congressman of Arizona, co-chair of the Congressional Progressive Caucus. And we also want to thank Cesar Zamudio, a freshman at Columbia University.

This is Democracy Now! When we come back, we look at another of President-elect Trump’s nominees, Mnuchin, Steven Mnuchin, to head the Treasury Department, a new revelation. Stay with us. 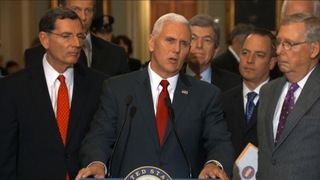