Why Did Media Overlook Sept. Shooting in Plano, Texas When Estranged Husband Killed Wife & 7 Others?

While Sunday’s shooting in Sutherland Springs, Texas, has received wall-to-wall media coverage, there was another mass shooting in Texas in September that received far less attention. In Plano, Texas, a man allegedly killed his estranged wife and her friends in what appears to be the deadliest incident of domestic violence in the town’s history. Twenty-seven-year-old Meredith Hight was watching the Cowboys football game with a group of friends and family when her estranged husband reportedly entered her house and opened fire, killing her and seven other adults. The shooter was killed by police. Local news reports Hight had filed for divorce in July. Hight’s mother said her daughter “loved hosting friends and families. This was her first opportunity to do it after the divorce, and he didn’t take it well.” For more, we speak with Ed Scruggs, vice chair and spokesperson for Texas Gun Sense, and Sarah Tofte, research director at Everytown for Gun Safety. Her team has just published a new report on the links between domestic violence and mass shootings.

StoryMay 21, 2018Soraya Chemaly on Mass Shootings: “Focus Should Be on Boys & Men Who Can’t Take No for an Answer”

AMY GOODMAN: But I wanted to ask Ed Scruggs about the Plano, Texas, mass shooting that occurred in September. And I bet a lot of people are saying right now, “What?” Yes, the Plano, Texas—

AMY GOODMAN: Describe what happened and the reaction.

ED SCRUGGS: One of the biggest missed stories of the year, or at least the last several months, was this mass shooting, which occurred in Plano, near Dallas. A football watching party where an estranged husband, accused of domestic abuse, or at least heavily suspected, in the process of divorcing his wife or splitting up—she was holding a football watching party, like they tended to do during their relationship. He didn’t like that. He showed up at the home in the middle of the party with an AR-15. They argued. He shot her. He entered the home. He shot everyone in the home and then was taken down by police and killed.

This received almost no national attention on the news. I believe there was something going on with the Russia investigation during that time, or something to that effect, but it received almost no coverage. I may have seen one small crawl on CNN, and that’s it—not one interview, not one report from the scene.

And what’s troubling about that is, one, we’ve become so desensitized that now nine deaths doesn’t qualify as news, but that the domestic violence component, it is—again, as I think Sarah mentioned earlier, it is a common link in many mass shootings. And this almost was a textbook case, where it evolved into a mass shooting of a large scale. And that was a direct connection. You can link it to this case of the church shooting, domestic violence included. The first mass shooting in the United States in the modern history, well known to many, the 1966 UT tower shooting here in Austin, that shooter, serious domestic violence against his wife. It is just a common thing.

So, we were—the media did not have its eye on the ball when the Plano shooting occurred. And it really has just stopped covering all of these smaller shootings, of murder-suicides. The majority of those involve domestic violence, where perhaps a spouse is killed, perhaps a child, one other person. That is happening all across the state and across this country. And we have just either become desensitized or not interested in covering that. So, people are shocked that this type of crime can happen in the church shooting in Texas, but the truth is, it has been happening on a rather large scale, but people have just not been paying attention. And that is very disturbing to me and, I think, to many other people.

AMY GOODMAN: And you were referring to Charles Whitman, the former Marine sharpshooter, who took rifles and weapons to the observation deck atop the main building tower at the University of Texas, Austin, opened fire for the next hour and a half, killed 15 people. Ultimately, he was shot dead, but again, began—

AMY GOODMAN: —with domestic violence. Now, I want to end with Sarah Tofte—

ED SCRUGGS: Yes, sorry. And I would just say that Whitman had a history of abuse himself, with a very abusive father, and surrounded by violence and surrounded by firearms at a very young age. I think that’s something, when you go into these cases and look at them, you’ll also find that with many of these shooters, as well. So, you know, one way to attack gun violence is to attack domestic violence. We have a 10-year program to attack opioid addiction. We have a war on drugs. How about a war against domestic violence and spousal abuse? You’ll not only cut that, but you’ll also cut violence. That is what I would think.

SARAH TOFTE: We have to address abusers’ access to firearms—excuse me. And we can do that in so many ways, making sure they’re prohibited from possessing firearms, making sure they turn in the firearms they own. And we, as a country, have to understand more the connections between domestic violence and firearm violence. We have to care more, not just for the victim, but for their families and for our entire communities. It is the way that we will prevent mass shootings in this country and the way that we can prevent everyday gun violence as it relates to domestic violence. And we can do so much more.

When we come back, the Paradise Papers. How do they implicate everyone from the current commerce secretary to the queen of England? Stay with us. 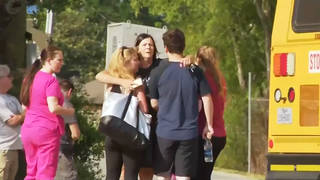