As Alabama’s special Senate race on Tuesday nears, criticism is mounting over Republican Roy Moore’s refusal to step down from an increasingly tight race meant to fill the Alabama Senate seat left vacant by Attorney General Jeff Sessions. Moore was twice ousted as Alabama’s chief justice—first in 2003 for refusing to remove a monument of the Ten Commandments in the rotunda of the Alabama Judicial Building. After being re-elected, he was again ousted in 2016, for ordering his judges to defy the U.S. Supreme Court’s ruling legalizing marriage equality. He was a proponent of Trump’s racist and discredited “birther theory” about President Obama. He has compared homosexuality to bestiality. He said Minnesota Congressmember Keith Ellison shouldn’t have been allowed to be sworn into Congress using a Qur’an, which he compared to “Mein Kampf.” In 2011, Roy Moore proposed eliminating all constitutional amendments after the 10th, which includes amendments prohibiting slavery and the amendments giving women and African Americans the right to vote. We speak with Derrick Johnson, president and CEO at the National Association for the Advancement of Colored People, and Chokwe Antar Lumumba, mayor of Jackson, Mississippi, and a longtime activist.

AMY GOODMAN: I wanted to ask you about Cory Booker coming down this weekend to Alabama, and Roy Moore. He has called for President Trump to resign. Chokwe Lumumba, mayor of Jackson, do you feel Trump should resign? He was talking about the 16 women who have made allegations of sexual harassment and abuse against the president.

MAYOR CHOKWE ANTAR LUMUMBA: Yeah. I think that the president has demonstrated a recklessness that is very concerning. And I think that in the light of—in light of that policy, in light of the contradictions that we see throughout the country, as we talk about civil rights, we can’t talk about civil rights without discussing women’s rights. And what I am happy is that we are bringing into the forefront discussions that have needed to be had a long time ago. And any person who has failed to respect, who has dishonored women in any way, such as the president is accused of, if that is true, he should step down.

AMY GOODMAN: And, Derrick Johnson, you’re president and CEO of the NAACP. Are you calling for President Trump to resign?

DERRICK JOHNSON: You know, for me, what is the standard? Is the standard that you treat all humans with dignity, with respect, and you are—you are operating with a level of integrity? This president has not been accused of sexual harassment; he admitted on tape that he harassed women. And if that is the standard that we’re looking at, yes, he should step down. It is the same standard they held for President Clinton during the Monica Lewinsky situation. It’s the same standard when they called on the senator from Minnesota to step down. It’s the same standard that we should uphold ourselves, that everyone should be treated with human dignity, whether you’re African-American, whether you’re a woman, whether you’re Latino. And with that standard, we can make a better democracy. But if you try to operate with a level of hypocrisy and bring your moral judgments against others, and yet you cannot hold that same standard, then you are not entitled to the dignity of the office of the presidency.

DERRICK JOHNSON: You should not be entitled to that office.

DERRICK JOHNSON: And, yes, he should step down.

AMY GOODMAN: Mayor Lumumba, President Trump used this trip, coming to the Jackson for the museum, also to hold a campaign rally for the accused pedophile Roy Moore in neighboring Alabama. You’re a mayor of a Southern city right near Alabama. What would be the effect of Roy Moore being elected on Tuesday in this special election? Your thoughts on Roy Moore?

MAYOR CHOKWE ANTAR LUMUMBA: I think that, you know, it further advances this effort to see a rise in bigotry in our society, a rise in all that this movement that we support was against. And so, you know, it further demonstrates inconsistency. It further demonstrates that the principle or the values that people suggest that they stand for is inconsistent with their actions. I’ve been listening to conversation about whether this is a value-versus-interest discussion in the support of Roy Moore. Your values should never be in competition with your interests. Your interests should always support your values. And at any point that your interests and your values depart, then your values should win out at the end of the day. And so, anyone who could be—who could take advantage of children, anyone who—you know, I’m the father of a little girl, and I have another little girl on the way. I can’t imagine supporting someone who would ever take advantage of a young child.

AMY GOODMAN: And Derrick Johnson? We have 20 seconds.

DERRICK JOHNSON: When you talk about values and you look at the state of Alabama, and whites in the state of Alabama, they have not come to grips with the fact that they are being used under a level of fearmongering, then with race and religion. And if they are truly a moral community, they would not be able to stand behind a man who is a pedophile, whether accused or otherwise. Everything points that we have a problem with this individual as being a pedophile. But the tune of the conservative right in the South has always been to use race and religion to motivate whites to vote against their own interests. And we’re seeing that right now.

The outcome of this election would not be an indictment on whether or not African Americans turn out to vote or not. It’s an indictment on white Alabamians who decide to put politics and party and fear above the value of children and the protection of children. And it will be a sad state for this nation for that individual to be seated in the U.S. Senate, but it also is a commentary on how far we have not come as a country, in the South, particularly in the white community across the South, who would put party and culture and misaligned values above the protection of children.

AMY GOODMAN: I want to thank you both for being with us, Derrick Johnson, president and CEO of the NAACP, and Chokwe Antar Lumumba, mayor of Jackson, Mississippi.

When we come back, we go to California, the fifth-worst wildfire in the state. We’ll talk to two people deeply concerned, among other issues, of farmworkers who are being required to work and without protective gear. Stay with us.

Amid Worst Winter Wildfires in California History, Farmworkers Are Laboring in Hazardous Air 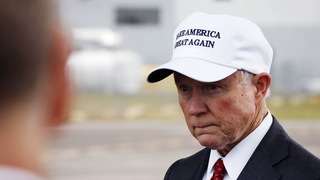