Was Firing of U.S. Attorney Preet Bharara Done to Cover Up Probes of Trump & Fox News?

Attorney General Jeff Sessions asked for the resignations of 46 U.S. attorneys on Friday, angering the prosecutors, who say they weren’t warned in advance. One of the most high-profile prosecutors asked to resign, United States attorney in Manhattan Preet Bharara, refused to step down Friday and was quickly fired. Bharara’s termination came as a surprise, since Donald Trump met personally with Bharara at Trump Tower last November and assured him he could remain at his post. The unusual circumstances of Bharara’s dismissal prompted Democrats to suggest it was politically motivated. Preet Bharara’s dismissal came as his office was probing Fox News after it allegedly failed to inform shareholders about numerous settlements in sexual harassment and assault cases. The dismissal also came less than a week after government watchdog groups sent a letter to the Manhattan prosecutor’s office asking for an investigation into whether President Trump violated a clause of the Constitution barring federal employees from receiving benefits from foreign governments. In addition, Preet Bharara was one of 18 U.S. officials barred from entering Russia. Russian President Vladimir Putin was reportedly angered by Bharara’s prosecution of Russian arms dealer Viktor Bout. We speak to Harry Siegel, an editor at The Daily Beast and columnist at the New York Daily News.

StoryJun 15, 2017Rep. John Conyers: Why I Am Suing President Trump

AMY GOODMAN: We move right now to another top story, Attorney General Jeff Sessions asking for the resignations of 46 U.S. attorneys Friday, angering the prosecutors, who say they weren’t warned in advance. Although the dismissal of U.S. attorneys is common during presidential transitions, those affected say the Trump administration bungled the layoffs, with many U.S. attorneys learning only through the media they had to clear out their desks by the end of the day.

One of the most high-profile prosecutors asked to resign, U.S. attorney in Manhattan Preet Bharara, refused to step down Friday and was fired the next day. Bharara’s termination came as a surprise since President Trump met personally with Bharara at Trump Tower last November, after he was elected, and assured him he could remain at his post. The unusual circumstances of Bharara’s dismissal prompted Democrats to suggest it was politically motivated. Preet Bharara’s dismissal came as his office was probing Fox News, after it allegedly failed to inform shareholders about numerous settlements in sexual harassment and assault cases. The dismissal came less than a week after government watchdog groups sent a letter to the Manhattan prosecutor’s office asking for an investigation into whether President Trump violated a clause of the Constitution, the Emoluments Clause, barring federal employees from receiving benefits from foreign governments. In 2013, Preet Bharara was one of 18 U.S. officials barred from entering Russia. Russian President Vladimir Putin was reportedly angered by Bharara’s prosecution of Russian arms dealer Viktor Bout.

On Sunday, Bharara tweeted about his firing, writing, quote, “By the way, now I know what the Moreland Commission must have felt like,” end-quote. That’s a reference to an anti-corruption commission set up by New York Governor Andrew Cuomo in 2013, which the governor then disbanded the next year. The tweet fueled speculation Bharara was fired because of his investigations into Trump’s businesses and the White House.

Well, for more, we’re joined by Harry Siegel, an editor at The Daily Beast and columnist at the New York Daily News. His most recent piece for The Daily Beast is headlined “Trump to U.S. Attorney Preet Bharara: You’re Fired.”

Harry Siegel, welcome to Democracy Now! Can you talk about what happened here and what this means, what Preet Bharara was looking at?

HARRY SIEGEL: So, I’m never sure with Donald Trump what he’s bungling and what he’s purposefully doing. With the publicly appointed—with the politically ambassadors, right away, he said, “Get out. Get out today.” So, getting rid of the U.S. attorneys, again, these are all pretty conventional things a new administration does, but they seem to be proceeding with purposeful contempt: “Hey, great job! We don’t have your replacements lined up, but please leave your office, return your emails and be done with all your business today.” It’s strange. It’s sort of insulting. And I’m not sure it’s accidental. As to what Bharara was investigating, the Southern District in New York—it’s called the sovereign district a lot, because it has so much on its plate.

HARRY SIEGEL: Mm-hmm. And so, Bharara, who showed real independence, was pursuing, which I think Trump liked, two Democrats, in Bill de Blasio, who he’s been investigating in various corruption things—

HARRY SIEGEL: —and the governor of New York, Andrew Cuomo. He has two of Cuomo’s closest allies about to go on trial. And it wasn’t clear if he was done with the governor himself. At the same time, you know, Trump Tower is in Preet’s orbit. He’s had several—several cases, investigations and prosecutions that touch on—that touch on Russia and friends of Putin, that actually touch on Turkey and the Iran sanctions.

AMY GOODMAN: Now, that’s interesting, because we now know that, well, the former national security adviser, he was a paid lobbyist for Turkey—

AMY GOODMAN: —while he was advising Trump, right up into the election, General Flynn.

HARRY SIEGEL: Right. And Bharara was going after a very well-connected guy close to the—close to the political powers that be in Turkey, who had actually been dodging the Iran sanctions, and had been doing this, interestingly enough, over some quiet objections from the Obama administration as they were trying to negotiate their Iran deal. But there was so much that’s interesting on his plate.

And with Fox, this wasn’t just allegations that they covered up their settlements so shareholders couldn’t see what they were paying here. It also looks like, from my reporting and Gabe Sherman’s and others’, that this had to do with other sorts of wiretapping and listening in on people’s phone calls and their emails, which is something that Rupert Murdoch, of course, has a long history with.

So what’s incredible is that the guy who’s rumored to be Trump’s pick to replace Preet Bharara, Marc Mukasey—right?—among other things, represented Roger Ailes. And it’s—and, of course, his father was the attorney general. And he became the attorney general when Preet Bharara, who was Chuck Schumer’s chief counsel in the Senate, got Gonzales pushed out for politically booting U.S. attorneys midterm.

AMY GOODMAN: So that was Alberto Gonzales. He boots out U.S. attorneys. He’s thrown out.

AMY GOODMAN: —replaces him. And now his son, who has worked for what? Giuliani.

HARRY SIEGEL: For Giuliani, who’s a former U.S. attorney of the Southern District, is supposedly going to be the guy who fills that role. So, it’s an incredible set of full-circle developments.

AMY GOODMAN: And explain more about Preet Bharara’s investigation into Fox, what exactly the allegations are.

HARRY SIEGEL: We don’t know. There’s reportedly a grand jury impaneled. And what’s been reported, by myself and others, is that the SEC and Preet’s office, the Southern District, have been and are looking into their covering up payments that—effectively, hiding from shareholders what they were doing to pay off employees who had accused leadership there of sexual harassment and other things, but at the same time that Fox, which is a notoriously paranoid culture, and Ailes being a notoriously paranoid guy, you know, did all sorts of things to listen in on their employees—on their phone calls, on their emails, stuff like that. And reportedly, Bharara’s office was also looking into that. And now, of course, he’s gone.

The funny thing is, the simplest explanation here is that Trump said a bunch of stuff in November, had no idea what he was talking about. Jeff Sessions was reluctantly on board. He had a pretty rough confirmation time. He had to recuse himself from the Russia stuff, which is interesting because the two U.S. attorneys who he didn’t accept the resignations are the deputy—are the acting deputy attorney general and Trump’s pick to be the permanent deputy attorney general. And those are the people who would be leading the Russia probe because Sessions has recused himself. So those two he called personally and he kept. And he tried to call Bharara the day before firing him, which you could feed into more conspiratorial stuff, but I’m almost certain was Trump trying to be half-decent and say, “Hey, man, I’m sorry I told you this thing, and now you’re out.”

AMY GOODMAN: And Sessions told him as early as last week that he was staying.

HARRY SIEGEL: Sessions told him—my reporting—he was the first guy. He told him—Sessions told him this week, I believe on a conference call with other U.S. attorneys, that he was definitely staying around. And then—

AMY GOODMAN: Do you think he was trying to deceive him, because if he were preparing in advance for leaving, he has access to a lot of information?

HARRY SIEGEL: Yes, yes. I think that’s what’s happening there. I think he was trying to deceive Bharara at that point. And I think when Sean Hannity started talking about a purge a day before, that it’s a lot more likely somebody said, “Hey, Sean, this thing is coming.” Then Trump was watching TV and said, “OK, let me get rid of all the U.S. attorneys.”

AMY GOODMAN: Have you ever seen anything like this? I mean, these U.S. attorneys, who have been involved for years in these cases, don’t have even a day to clear out their offices. Preet Bharara bought one day, because he refused to step down on Friday, so he stayed until Saturday.

HARRY SIEGEL: It’s pretty incredible. Also, this administration has nominated zero of their own U.S. attorneys, for anywhere in the country. So they’ve got 44 who are leaving. They’ve got 44 people to nominate and put through. And that means the people they just pushed out, that it’s their right hands who are going to be running these offices indefinitely, until that gets sorted out.

AMY GOODMAN: Well, Harry Siegel, we’ll link to your pieces, editor at The Daily Beast, columnist at the New York Daily News. The most recent piece, which we will link to, is headlined “Trump to U.S. Attorney Preet Bharara: You’re Fired.”

This is Democracy Now! When we come back, how is Jared Kushner’s family, one of the senior advisers to President Trump, about to make something like $400 million in a real estate deal with a major Chinese corporation that has deep links to the Chinese government? We’ll talk about it. Stay with us. 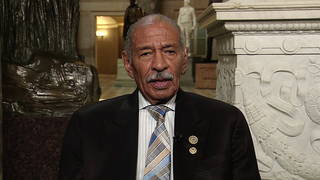