The United Nations has warned that the world is facing its largest humanitarian crisis since the end of the Second World War. Nearly 20 million people are at risk of starvation in Nigeria, Somalia, South Sudan and Yemen. Last month, the U.N. declared a famine in parts of South Sudan. Earlier this week, aid officials said they’re in a race against time to prevent a famine brought on by a U.S.-backed, Saudi-led war and blockade. Almost 19 million people in Yemen, two-thirds of the total population, are in need of assistance, and more than 7 million are facing starvation. For more, we speak with Joel Charny, director of the Norwegian Refugee Council USA.

AMY GOODMAN: The United Nations has warned that the world is facing its largest humanitarian crisis since the end of the Second World War, with nearly 20 million people at risk of starvation in Nigeria, Somalia, South Sudan and Yemen. The U.N.'s humanitarian chief, Stephen O'Brien, told the U.N. Security Council Friday that $4.4 billion is needed by July to avert a famine.

STEPHEN O’BRIEN: We stand at a critical point in our history. Already at the beginning of the year, we are facing the largest humanitarian crisis since the creation of the United Nations. Now, more than 20 million people across four countries face starvation and famine. Without collective and coordinated global efforts, people will simply starve to death. … All four countries have one thing in common: conflict. This means that we, you, have the possibility to prevent and end further misery and suffering. The U.N. and its partners are ready to scale up, but we need the access and the funds to do more. It is all preventable. It is possible to avert this crisis, to avert these famines, to avert these looming human catastrophes.

AMY GOODMAN: Last month, the U.N. declared a famine in parts of South Sudan, but O’Brien said the biggest crisis is in Yemen. Earlier this week, aid officials said they’re in a race against time to prevent a famine brought on by a U.S.-backed, Saudi-led war and blockade. Almost 19 million people in Yemen, two-thirds of the total population, are in need of assistance, and more than 7 million are facing starvation—an increase of 3 million since January. The executive director of the World Food Programme said her agency had just three months’ worth of food stored and that officials were only able to provide hungry Yemenis with about a third of the rations they need. This all comes as the Trump administration is seeking billions of dollars in cuts in funding to the United Nations.

To talk more about the crisis, we’re joined by Joel Charny, director of the Norwegian Refugee Council USA.

Joel, thanks so much for joining us. Can you talk about this worst humanitarian crisis since World War II?

JOEL CHARNY: Well, Stephen O’Brien described it very well. In four countries, because of conflict—only in one case, Somalia, do we have drought, which is also driving the deprivation. But in Yemen, Somalia, South Sudan and northern Nigeria, millions of people are on the—are on the brink of famine, largely because of the disruption of food production, the inability of aid agencies to get in, and just ongoing conflict, which is making life a misery for millions of people.

AMY GOODMAN: So let’s start with Yemen, Joel. I mean, you have the picture of President Trump yesterday sitting with the Saudi leader in the White House. The war that’s taking place in Yemen, the Saudi bombing, backed by the United States, can you talk about the effect this has had on the population?

JOEL CHARNY: It’s been a relentless war, with violations of international humanitarian law by the Saudis and the coalition that they’re a part of, as well as by the Houthis that are resisting the Saudi assault. And from the beginning of the bombing—I mean, I vividly remember, when the bombing first started, in—within the space of a couple weeks, the warehouses and office buildings of three or four nongovernmental organizations working in Yemen were hit by the Saudi assault. And what’s happened, Yemen imports 90 percent of its food even in normal times, so this is not so much a disruption of food production, but it’s a disruption of commerce due to the bombing, due to the blockade, due to the movement of the national bank from Sana’a down to Aden. And taken all together, it’s just creating an impossible situation in a country that’s completely dependent on food imports for its survival.

AMY GOODMAN: On Monday, the World Food Programme said they’re in a race against time to prevent a famine in Yemen. This is the executive director, Ertharin Cousin, who just returned from Yemen.

ERTHARIN COUSIN: We have about three months of food stored inside the country today. We also have food that’s on the water on the way there. But we don’t have enough food to support the scale-up that is required to ensure that we can avoid a famine. What we’ve been doing is taking the limited amounts of food that we have in the country and spreading it to as far as possible, which means that we’ve been giving 35 percent rations in most months. We need to go to 100 percent rations.

AMY GOODMAN: So, the U.S. is supplying weapons for the Saudi campaign, the war campaign, in Yemen. The strikes have increased. What do you think needs to happen to save the people of Yemen at this point?

JOEL CHARNY: At this point, really the only solution is some kind of agreement between the parties to the conflict—the Saudis and their allies and the Houthis. And over the last year, 18 months, several times we’ve been close to seeing an agreement that would at least produce a ceasefire or end some of the relentless bombing that’s been going on. Yet, every time, the agreement breaks down. And, I mean, this is a case where if the war continues, people will die from famine. I don’t think there’s any question about that. We just have to find a way for the war to end. And right now, there’s just a complete lack of diplomatic effort to try and solve this situation. And I think, as a humanitarian representing the Norwegian Refugee Council, we can do what we can, you know, in the face of this conflict, but the fundamental solution is an agreement between the parties that will stop the war, open up commerce, you know, have the port be open, and allow, therefore, the aid machinery from the World Food Programme and nongovernmental organizations like NRC to function.

AMY GOODMAN: I mean, this is not the U.S. intervening and trying to broker an agreement between others. This is the U.S. directly involved in causing this conflict.

JOEL CHARNY: And, Amy, it needs to be stressed that this is not something that, you know, started on January 20th. Humanitarian agencies in Washington, you know, myself and my colleagues, we’ve been pointing out, dating back well into the last year of the Obama administration, that, you know, the bombing campaign was leading to an untenable humanitarian situation, and the U.S. support of that bombing campaign was highly problematic from a humanitarian standpoint. So, you know, this is something that the U.S. has been driving for some time. And again, as with many things right now, it has to be seen within the context of the war or the proxy war between, you know, the Saudis and Iran for control and supremacy in the Middle East. The Houthis are perceived as an Iranian proxy. Many dispute that, but that doesn’t change the fact that there is an ongoing war that seems unable to be resolved. And we need—and again, it doesn’t necessarily have to come from the U.S. Perhaps it can come from the U.N. under the leadership of their new secretary-general, António Guterres. But we need a diplomatic initiative as it relates to Yemen to avert the famine. 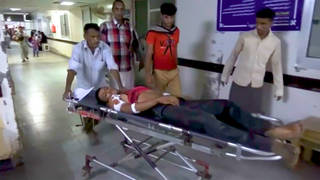