In Burlington, Vermont, at least three prominent immigrant rights activists have been arrested in recent days. All three—Cesar Alex Carrillo, Enrique Balcazar and Zully Palacios—are leaders or members of the group Migrant Justice. Balcazar, who is known as Kike, serves on Vermont Attorney General T.J. Donovan’s immigration task force, which was created to respond to the Trump administration’s immigration policies. For more, we speak with Will Lambek, organizer with Migrant Justice.

JUAN GONZÁLEZ: On Saturday, hundreds of people rallied in Burlington, Vermont, following the arrests of three immigrant rights activists in recent days. The first arrest occurred on Wednesday, when agents arrested 23-year-old Cesar Alex Carrillo outside a courthouse, where he was scheduled to appear for a hearing to dismiss charges from a 2016 DUI arrest. Carrillo is a dairy worker who’s married to a U.S. citizen. They have a 4-year-old girl. He’s also a member of the group Migrant Justice.

Then, on Friday, two leaders of Migrant Justice were arrested and detained by undercover ICE agents in Burlington. Enrique Balcazar is a 24-year-old from Mexico. Zully Palacios is a 23 year-old from Peru. They were both prominent activist leaders. Balcazar, who is known as Kike, serves on Vermont Attorney General T.J. Donovan’s immigration task force, which was created to respond to the Trump administration’s immigration policies.

ABEL LUNA: Today we’re here, because yesterday Kike was—we were at the office about 3:00 p.m., you know, talking about how do we make the state more secure, how do we educate our communities to not be afraid to—even though, you know, times are changing, and there’s a change in government, and things are getting tougher, we cannot—we cannot stay back. We need to fight. We need to fight even harder. … A half an hour after that, when, you know, I got home, we got a phone call that he was being detained, you know, by ICE. Kike and his partner Zully both have been—you know, done so much work for our—for the community, and it’s not fair. So, today, we’re demanding—we’re demanding ICE, as a community—are we demanding ICE? Or—

ABEL LUNA: Do we want them to be free or no?

AMY GOODMAN: We go now to Burlington, Vermont, where we’re joined by Will Lambek, staff member with Migrant Justice.

So, three of your members, Will, have been picked up by ICE, have been arrested and detained, facing deportation. Can you explain what’s happening and whether the Vermont government is involved with this?

WILL LAMBEK: That’s right, Amy. We have a rogue ICE agency here in the state that is targeting community leaders, human rights defenders, who are organizing for rights and dignity in their community. We have no reason to believe that the state was involved in these three arrests. And actually, Enrique, as a leader in Migrant Justice, has helped to write the policy in Vermont to make sure that law enforcement in this state aren’t a party to Trump’s policy of mass deportation.

JUAN GONZÁLEZ: I want to turn to Victor Diaz, a member of the Farmworkers Coordinating Council with Migrant Justice. Victor had himself been detained by ICE.

VICTOR DIAZ: [translated] And when I was detained, Kike and his partner Zully, they stood up for me, and they mobilized the community to fight for my freedom. And I was freed. And so now I’m here to fight for the freedom of Kike, of Zully, of Alex, because they deserve their freedom, too, so they can be back with their community, back committed to the fight for dignity.

JUAN GONZÁLEZ: We also have a clip of Miguel Alcudia, another member of the Migrant Justice Coordinating Committee, who also spoke at Saturday’s rally in Burlington. And he spoke in support of Zully Palacios and about Vermont’s dairy industry.

MIGUEL ALCUDIA: [translated] And when Zully got involved with this struggle, she knew the risks that she was taking on, but she didn’t let that stop her. She went ahead and fought for the rights of the more than 1,500 immigrant farmworkers that are living and working in this state, because when Zully learned about the abuses that were happening in our state’s dairy industry, she said, “I need to put a stop to this. I’m going to get involved in the struggle. I’m going to raise my voice to be in solidarity, because this cannot continue.”

JUAN GONZÁLEZ: Well, Will, could you talk about Migrant Justice’s Milk with Dignity Campaign and how that could possibly be connected to all of these—all of these detentions or—and arrests by ICE?

WILL LAMBEK: Absolutely. Migrant Justice is organization founded and led by the more than 1,500 workers in this state’s dairy industry. Immigrant workers who sustain the industry and produce some of the world-famous products as Ben & Jerry’s ice cream, Cabot cheddar. And Enrique, Kike, he has helped to craft and lead the Milk with Dignity Campaign, calling on Ben & Jerry’s ice cream to sign a commitment to the immigrant farmworker community ensuring that their ice cream is made free of human rights violations. He helped lead a campaign that resulted in Ben & Jerry’s signing that commitment in 2015 and has been negotiating with them ever since, but they’ve been dragging their feet. And to this day, Ben & Jerry’s has yet to implement that agreement in their supply chain.

JUAN GONZÁLEZ: And wasn’t there a threat previously to Kike that he was next on the list of people to be picked up?

WILL LAMBEK: Indeed. When another Migrant Justice member was arrested last year, ICE agents told him, “Tell your friend Kike that he’s going to be next.” We know that Kike’s house was being surveilled. And he was arrested—he and Zully were arrested together when they were leaving the Migrant Justice office. This is a clear case of political retaliation, trying to break the spirit of organizing in this community.

AMY GOODMAN: So describe how they’re each taken, I mean, because the state government is not working with ICE on this. They see their names if they’re going to court or something, and then they go there?

WILL LAMBEK: In the case of Alex’s arrest on Wednesday, who was taken in front of his wife, ICE may have gotten that information from the state court. We don’t know. In the case of Zully and Kike, it’s clear that they were surveilling our office. These are two prominent human rights leaders, organizing for rights and dignity in this community, who were taken as they were heading home after leaving the Migrant Justice office.

WILL LAMBEK: They’re both being detained. All three of them are being detained at a detention facility in New Hampshire. And we’re organizing to demand their immediate release. As your viewers saw, 500 people turned out on three hours’ notice to call for their release. We have rallies planned around the state this week. And when Boston ICE Director Todd Thurlow opened up his computer this morning, he saw more than 4,000 emails from supporters calling for the release of these detained human rights leaders.

AMY GOODMAN: Kike served on Vermont Attorney General T.J. Donovan’s immigration task force? Can you tell us also the status of a law that’s passing through the Vermont Legislature, which states that the Vermont government will not work with ICE on these detentions?

WILL LAMBEK: That’s right. There are a couple bills in the Vermont state House which would strengthen Vermont’s policies that are currently in place to limit Vermont law enforcement’s collaboration with immigration enforcement. One bill, promoted by the governor, would make sure that the state doesn’t sign on to the so-called 287(g) agreements that deputize local law enforcement to do ICE’s dirty work for them. Another, House Bill 492, the racial justice reform bill, we see as even more important. That would mandate full enforcement of the state’s fair and impartial policing law, a law that Kike helped to write.

JUAN GONZÁLEZ: Have you been in touch with your senator there, Bernie Sanders, about intervening in these cases?

WILL LAMBEK: We have. Both Senators Sanders and Senator Leahy have been made aware of the case, as well as many of Vermont’s political leaders. And we fully expect that they will speak out and take action against these horrendous targeted arrests of human rights leaders in their state.

AMY GOODMAN: Will Lambek, we want to thank you very much for being with us, staff member with Migrant Justice. And we will continue to follow these cases. Three prominent migrant leaders now have been detained by ICE in Vermont. 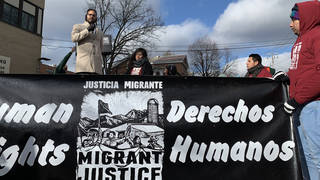