Latina Actress America Ferrera: When Trump Says “America First” He Is Not Including Me & My People

Backstage at the Women’s March on Washington, Amy Goodman caught up with America Ferrera to talk about President Trump, immigration policy, reproductive rights and more. Ferrera is a Honduran-American actress best known for her role in “Ugly Betty.”

AMERICA FERRERA: I’m America Ferrera. I’m an actress and a producer and, today, an activist, marching.

AMERICA FERRERA: Marching because I am a proud American, a woman and a human being who believes in the value and the dignity of every life. And that is under attack right now. And we have to be here, standing together.

AMY GOODMAN: President Trump has named his Cabinet. They haven’t all been confirmed. Only two so far. It’s the whitest, wealthiest Cabinet in many, many years. There is no Latino, no Hispanic Cabinet member named so far. That’s the first time in about 30 years. Your thoughts?

AMERICA FERRERA: Well, I think it has many roles. I think, for one, it can convert, but also I think it can bring us together. I think that we do have the capacity to talk to one another and to have conversations and to be in a discourse. And I think that, as artists and as entertainers, we have to start hearing one another and not be tempted to draw further and further into our silos and into our echo chambers. We have to reach across the real aisle to real people, not just our characterizations of people. And we’re also here to stand together and to stand united and to give courage to the people who are in all parts of this country who feel so alone and so afraid and unprotected and unseen. And that’s what we’re doing here today, and that’s what we have to continue to do from here on out, because this is just day one.

AMY GOODMAN: Do you feel pressure not to speak out, in any way, as a well-known actress?

AMERICA FERRERA: I mean, if there’s even the tiniest inclination to silence myself, it’s overwhelmed by the indignities and the attacks that have been committed against not just me, myself, but the people I love and my family and my friends and this country that I love, and have held so deeply in my heart the values that—as the daughter of immigrants, you know, that this country is great because of what we believe and what we hold in our hearts. And all of that is under attack, so there’s no—there is no part of me that can sit by silently and watch that.

AMY GOODMAN: There was a sign here that said, “Women are the wall, and Trump will pay.” Can you talk about immigration and Donald Trump and building the wall on the border and what that means to you?

AMERICA FERRERA: Well, building the wall is also another example of just the lack of understanding. You know, the wall and the border is not the issue. We have millions of undocumented people in this country, not all Latinos, from all parts of the world, who are in this country, who are contributing to this country. And if we found a way to comprehensively and logically bring them into the fold, everything would benefit. Our economy would benefit. Our culture would benefit. And it’s sort of a false and fake narrative, and it’s a distraction. People are—that’s not even the way people are coming into this country, in the majority. And also, immigration has been sort of—been swept over or painted over with this very large brush, and there’s so much nuance to the conversation. And not—and we haven’t found a way to get through to people about the nuance of it, that it isn’t people—it isn’t all people coming across the border. It’s about—it’s about people that are here in this country contributing, who are helping us build this country. And we have to find a way to bring them into it.

AMY GOODMAN: Finally, President Trump said in his inaugural address, “Let there be a decree issued across the land: America first.” You think he was talking about you?

AMERICA FERRERA: He wasn’t invoking my name, and he probably wasn’t including me and my people in that America, the vision of America he has is.

AMY GOODMAN: And why Planned Parenthood means something to you?

AMERICA FERRERA: I mean, Planned Parenthood has been a stalwart in the fight for women’s freedoms. And, you know, if we can’t even decide what happens to our bodies as women, how can we decide the future of our children and the lives that we want to give them and shape for the future of this country? It starts with the right to be able to make decisions about our own bodies. And Planned Parenthood is a beacon for us as women. And as their slogan goes, their doors stay open. And so, as long as they’re here, we’ll be here with them. 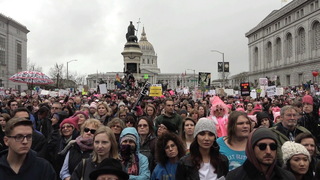