In Berkeley, California, at least 20 people were arrested as fights broke out between white nationalist Trump supporters and antifascist protesters during competing rallies on Saturday. Photos show some of the Trump supporters posing with the Nazi salute. Police say at least one person was stabbed during the clashes. Several more were injured. In one instance, a known white supremacist was videotaped punching a young antifascist woman named Louise Rosealma in the face. The man who is seen punching her is Nathan Damigo, a former marine who founded the white supremacist organization known as “Identity Europa.” For more, we speak with award-winning reporter Shane Bauer. His most recent article is titled “I Went Behind the Front Lines with the Far-Right Agitators Who Invaded Berkeley.”

AMY GOODMAN: This is Democracy Now!, democracynow.org, The War and Peace Report. I’m Amy Goodman. In Berkeley, California, at least 20 people were arrested as fights broke out between white nationalist Trump supporters and antifascist protesters during competing rallies on Saturday. The Trump rally was organized in part by a group called the Proud Boys, which describe themselves as “Western chauvinists.” It’s led by Gavin McInnes, the co-founder of Vice magazine. Photos show some of the Trump supporters posing with the Nazi salute. Police say at least one person was stabbed during the clashes. Several more were injured. In one instance, a known white supremacist was videotaped punching a young antifascist woman named Louise Rosealma in the face. The man who is seen punching her is Nathan Damigo, a former marine who founded the white supremacist organization known as Identity Europa.

To talk more about what happened at the rallies, we go to Washington, D.C., where we’re joined by Shane Bauer, award-winning senior reporter at Mother Jones. He reported on Twitter during the protest that some of the Trump supporters were members of armed, right-wing militias, his recent piece headlined “I Went Behind the Front Lines with the Far-Right Agitators Who Invaded Berkeley.” Last year, he wrote about the ongoing—undercover with right-wing border militia. He also just won a National Magazine Award for best reporting for his reporting going undercover at a private prison.

Shane, welcome back to Democracy Now! Talk about what you saw on the streets.

SHANE BAUER: Thanks for having me, Amy. Well, essentially, this is—

SHANE BAUER: Essentially, this is the third major clash that has happened in Berkeley of this kind. And each of these rallies have had a large representation of white nationalist groups. This group—this rally was called by a coalition of the far right under the banner of free speech. It was a—they were saying it was a free speech rally, in the city that was known for its 1960s free speech movement. I think many of the counterprotesters saw this free speech banner as a cover for, you know, white supremacist groups and fascist groups to organize.

So, when I went to the demonstration, essentially, the park that it was being held in was cordoned off by the police. The police were checking people for weapons. There were people on—there was essentially a line drawn between the two sides, and people were shouting at each other. And it didn’t take long before the situation turned into an all-out brawl, where dozens of people are punching and kicking each other. And as time passed, the police essentially disappeared, and there was kind of, for hours, ebbs and flows of major clashes between the two sides.

AMY GOODMAN: I want to turn to a clip, one of the videos that you posted, couple of videos you posted on Twitter from Saturday’s protest. In these clips, you talk to police officers on duty during the protest.

SHANE BAUER: You guys are hanging back.

POLICE OFFICER 1: That would be a good question for the chief of police.

SHANE BAUER: I mean, I haven’t seen the cops around. People are just like beating the [bleep] out of each other.

POLICE OFFICER 2: I would defer you to our public information officer.

SHANE BAUER: So they told you to hang back?

POLICE OFFICER 2: As I said, I defer you to our public information officer. What’s your next question?

SHANE BAUER: I mean, I’m just wondering why I’ve been—I’ve been watching all day people get, you know, beat up pretty bad. I haven’t seen you guys around much.

SHANE BAUER: Hey, you guys been hanging back today, huh?

SHANE BAUER: You guys been hanging back today.

SHANE BAUER: Yeah, I mean, I have never seen anything like this in the Bay Area. I’ve never seen anything this violent. People are getting constantly bloodied throughout the day. And the police are, essentially, absent for most of the day. You know, the police were there in the beginning, kind of pulling people out of fights, and then were just hanging back, which I think surprised—really surprised a lot of people.

AMY GOODMAN: I want to go to another video you posted on your Twitter account. In this clip, we hear from a Trump supporter at the protest.

TRUMP SUPPORTER: I thought this was just a march for free speech. I was coming to support it. I brought this stuff just in case they started making people bleed. I put it on. I didn’t even get my helmet all the way on before the first guy came with a laceration. So I’m sitting there holding him against me and everything. We’re trying to get gauze and stuff on him.

SHANE BAUER: Is Berkeley symbolic in a certain way, here?

TRUMP SUPPORTER: Yeah, because, back in the past, this is where—or, Berkeley, rather—is where the free speech movement was done, by the kids who went to Berkeley. And now it’s like the opposite. And it really—honestly, it crushes me inside. It really hurts, man. Like I’m sitting here—like, honestly, I don’t even like when our side is like trying to fight them. Like, I just—I just want peace. Like, I’ve broken up two fights now.

SHANE BAUER: Well, he was—he was saying something that I heard from a lot of people, that they came out for free speech. He also came from another part of the country, which was true for a lot of the people that I spoke to. What was really surprising to me about this demonstration and this rally was the kind of—the coalition that came together. I mean, there were white nationalist groups, like Identity Europa. There was one group that spoke at the rally called the Pink Pistols, which is an LGBT group that are Second Amendment advocates and supporters of Trump, because they support the Muslim ban. There were African-American speakers that spoke in favor of Trump. There were—was a writer from AltRight.com who, you know, spreads the conspiracy theory of white genocide. I mean, it was a really strange coalition of people that were coming together under this kind of one banner of free speech and, you know, being able to say what they want.

AMY GOODMAN: Shane, I want to talk to you about—I want to talk to you about the arrests, but we have to end the show, so we’ll do it on the post-show, and we’ll put the web exclusive at democracynow.org. Shane Bauer, award-winning senior reporter at Mother Jones. We’ll link to your piece, “I Went Behind the Front Lines with the Far-Right Agitators Who Invaded Berkeley.” 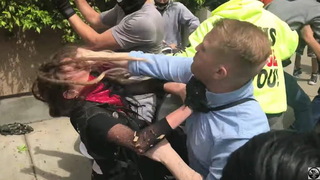