Just days before the People’s Climate March in Washington, D.C., a group of Democratic senators and independent Sen. Bernie Sanders introduced a bill to transition the United States to 100 percent clean and renewable energy by no later than 2050. Two of the bill’s co-authors, Ed Markey of Massachusetts and Jeff Merkley of Oregon, took part in the People’s Climate March.

AMY GOODMAN: This is the People’s Climate March. Before the march began, a group of elected leaders held a news conference right there at the Reflecting Pool. This is Democratic Senator Ed Markey of Massachusetts.

SEN. ED MARKEY: When people were unhappy with slavery, the abolitionist movement came here and stood here to say no, that they wanted a revolution. When women wanted to have the right to vote, the suffragettes came here, where we are standing, to say that that must change. When the civil rights movement, Martin Luther King, wanted a change in the laws so that African Americans and all minorities had the same rights as white people in our country, they came here and stood here. And they all were saying the same thing: “Free at last, free at last, thank God almighty, free at last.”

And you know what? The green movement does not agonize. The green movement organizes. And that’s what is happening here today, not just here in Washington, but all across the country, because there is one thing that is separating the oil and coal industry, on every one of these issues, from the green movement: On every single issue, we are right, and they are wrong. And the Koch brothers must be sent a message, that their science, which Donald Trump has adopted, is just as bogus as a degree from Trump University. We have to make sure that they know that science is what this country is all about, and that we are going to fight for science every single day, until Donald Trump is no longer the president of the United States. Thank you all for being here. Let’s go out there and do the job!

AMY GOODMAN: What are you doing right now in Congress around this issue of climate change?

SEN. JEFF MERKLEY: So, yesterday, in partnership with a whole bunch of environmental groups and social justice groups, I introduced 100 by 50. It’s a phrase I want everyone in the country to hear multitudinous times, 100 by 50—100 percent clean and renewable energy by the year 2050. It’s a goal that we’ve got to get completely off fossil fuels, no more burning in any sector of the energy economy. And it’s a timeline. And to get there, we have to move urgently, passionately, quickly. Time is not on our side.

AMY GOODMAN: So you introduced this with Senator Sanders?

AMY GOODMAN: So, how do you expect to get it through a Republican-led Senate?

SEN. JEFF MERKLEY: Well, often you introduce legislation to prepare for the moment when you can get it through. And right now we have a Koch brother cartel. The oil and coal and gas industry is blocking environmental action. But it’s very helpful at the federal level to lay out the vision. It’s a statement of values. It’s also a call to action. But the real point is, let’s paint that picture nationally, but then let’s take action at the grassroots level. And that’s what this march is all about today. It’s grassroots action. It’s folks going to their local place of worship and saying, “We need a 100-by-50 plan. And what are we going to do the next three years to stop our use of fossil fuels?” doing the same with their city council, with their—with their club, with their neighbors, with so forth.

AMY GOODMAN: What exactly, though, does that mean? I mean, you’ve sketched it out. What would 100 percent renewable by 2050 mean?

AMY GOODMAN: And how would you achieve this?

SEN. JEFF MERKLEY: Well, so, in the bill, we lay out every sector of the energy economy, because each one is a little different. But one of the big strategies is to make sure that every electron on the grid is a green electron. Second of all, move as much of the energy economy onto the grid as possible. And then there will be other difficult areas, like commercial airplanes, where we’re probably going to have to go to some form of biofuels. But we’ve got to work on every sector.

AMY GOODMAN: So, you mentioned a Koch brothers cartel. What do you mean by that?

SEN. JEFF MERKLEY: Well, what I mean is that there is a very rich people who own a whole lot of fossil fuels. They own coal. They own oil. They own natural gas. And they want to keep extracting it and burning it. They have no concern for what it’s doing to the planet. Climate disruption is affecting us everywhere. It’s affecting our forests, our oceans and our oysters and our coral reefs. It’s affecting our farmers and irrigation for farming across the country. Huge impact on rural America, which I think is important to emphasize. This is not an urban issue. This is an everywhere issue.

AMY GOODMAN: So, you, to say the least, were very critical of Rex Tillerson in his confirmation process as secretary of state—Rex Tillerson, the former CEO of ExxonMobil, the largest private oil corporation in the world. Talk about your concerns then and, now that he is the secretary of state, what you’re seeing.

SEN. JEFF MERKLEY: Yes. And unfortunately, Scott Pruit has spent his career working with the fossil fuel cartel to take down environmental regulations, which increases the particulates in the air and contributes to lung cancer and to asthma, taking down the standards on mercury, and mercury is a biopersistent neurotoxin that affects the developing brains of our children. And so, he’s doing everything he can—this individual, Scott Pruitt, he’s doing everything he can to make Americans sicker, less healthy, and more damaging to the environment.

AMY GOODMAN: We are here on the hundredth day of the Trump presidency. Your evaluation?

SEN. JEFF MERKLEY: One hundred disastrous days, terrible days. One of the things that occurred during this hundred days was that—the confirmation of President Trump’s nominee for the Supreme Court. This is a stolen Supreme Court seat. It’s the first time in U.S. history that a seat has been stolen from one administration and delivered to another. And it was done to pack the court on behalf of the fossil fuel cartel. And so, that is the—that is going to be a huge damage for decades to come.

AMY GOODMAN: Explain what you mean, how that’s related to—how the Supreme Court is related to climate change.

SEN. JEFF MERKLEY: Yes. There’s a court decision called Citizens United. It was a 5-4 decision. It allows dark money to be spent, on unlimited numbers and without identity, in campaigns throughout the nation. This money was used in 2014 to give the Republicans control of the U.S. Senate. And ever since then, the Republican majority have been the puppets, and the Koch brothers have been the puppeteers. And so, it’s very important to this industry, this coal, oil, natural gas industry, that they keep this dark money flowing, which means keeping a Supreme Court that does not understand we, the people. We, the people—and here we are at the People’s Climate March—this is the foundation of our government. It is the vision the founders laid out in the first three words of the Constitution: “We the people.” They put it in supersized font, so that when you look at the Constitution, you see that standing out. And that’s a whole principle. But they are all about—this 5-4 decision of Citizens United was all about government by and for the powerful, for the privileged and for the polluters. 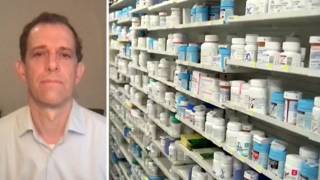