Glenn Greenwald on Barrett Brown, Press Freedom & the Failings of the Corporate Media

As part of our conversation with jailed journalist Barrett Brown, we spoke with Pulitzer Prize-winning journalist Glenn Greenwald about why he feels Brown’s case marked one of the most significant threats to press freedom in the United States in decades.

StoryMay 12, 2017Jailed Reporter Barrett Brown on Press Freedom, FBI Crimes & Why He Wouldn’t Do Anything Differently

GLENN GREENWALD: The Barrett Brown case is probably one of the most significant threats to press freedom that has happened in the United States in the last, I would say, two decades at least. And it’s received remarkably little attention in the mainstream press, because they only pay attention when they themselves are attacked. So, Donald Trump attacks some—posts some childish insult about the media or calls them the enemy of the people, and it’s wall-to-wall coverage in The New York Times and CNN. And yet, here was Barrett, doing some of the most intrepid and important journalism in the United States, digging into this incredibly opaque and powerful faction, and because of his journalism into those areas, that is what directly triggered this FBI investigation and attempt to imprison him. And the reason he got so little support from media organizations defending his press freedom was because they only care about press freedom when it comes to large corporate media outlets that aren’t actually threatening to the government.

And this was a case where Barrett discovered extreme levels of wrongdoing and corruption, including this slide that said it wanted to destroy my reputation to prevent me from continuing to defend WikiLeaks, talking about defending—destroying the reputation of people who are activists against the Chamber of Commerce. He was doing incredibly important work. He’s obviously a very talented journalist. The scribblings he did for us in prison on paper with pencil won the National Magazine Award for the columns that we published. And yet, now he’s saying, just like Laura Poitras felt when she had to edit her film Citizenfour, that he can’t safely do journalism in the United States. So we love to talk about Russia and press freedoms there, even though we have no impact on it when we do. We spend very little time talking about the real threats to press freedom in this country, because they happen to people like Barrett Brown rather than to MSNBC and The New York Times.

AMY GOODMAN: But explain why it mattered what HBGary was saying, this information coming out, for example, on you.

GLENN GREENWALD: Well, these contractors, that very few people have heard about, including HBGary—I had never heard of them until this happened—or Palantir, the organization funded by the billionaire Peter Thiel, exert extreme levels of power inside of this murky world of intelligence and defense contractors. And what they were planning to do was they were putting a pitch together to Bank of America, using the firm Hunton & Williams, which is this powerhouse in D.C., to try and tell the Bank of America, which at the time thought it was going to be the target of a WikiLeaks disclosure, “Let us use our dark arts and dirty little tactics to destroy the people who will be your critics.” And that was the plan they were putting together, that Anonymous discovered and Barrett reported on. And the only reason why it was discovered is because Anonymous randomly hacked into it. And what was amazing about it was, there were dozens of people talking about these plans, that were illegal, or certainly unethical, and not one person ever said, “Wait a minute. Isn’t this going a little bit too far to destroy journalists for reporting on these events?” That’s how common this mentality is in that world and how much impunity there is for it. And that was what Barrett was on the verge of really uncovering at the time the FBI began trying to put him in prison.

NERMEEN SHAIKH: Well, in an interview on Tuesday with the ACLU, you talked about, elaborated on the point you made now, about how the media itself persecutes its own sources and that journalists take the lead in advocating for policies that would restrict their own press freedom. So, could you explain why you think that is? Because, of course, it’s completely counterintuitive.

GLENN GREENWALD: Right. You would think, in just a normal, healthy democracy, you would have the government over here being adversarial to press freedoms, and then you would have journalists vehemently defending the power of the freedom of the press. That’s how it’s supposed to work. And yet, in so many cases, especially when the government targets journalists who aren’t popular among or working within these mainstream outlets, not only do the journalists ignore it or acquiesce to these efforts to punish and criminalize and attack independent journalists, they become the leading cheerleaders. When I first started doing the Snowden reporting, it wasn’t, you know, James Clapper or Keith Alexander going on TV calling for my imprisonment; it was David Gregory or Andrew Ross Sorkin or other journalists who work at The New York Times, someone with an institution with a history of defending press freedom. And so, that is a huge problem, is, because so many mainstream journalists in the United States identify not with journalism, but with serving the interest of the U.S. government and the national security state, they become the leading spokespeople, the leading advocates, for the right to criminalize journalism. The U.S. government doesn’t have to defend trying to put Julian Assange in prison for publishing documents. Journalists are happy to take the lead in arguing that that should happen, even though that will directly threaten them.

AMY GOODMAN: Do you think that will extend to what you’re describing?

GLENN GREENWALD: No, unfortunately, I don’t. And if you notice, there are certain lines that the, quote-unquote, “resistance,” including the media, won’t cross. So, for example, when Trump bombed Syria with no congressional authorization and no plan, the media largely cheered. When he dropped the so-called Mother of All Bombs in Afghanistan, the largest bomb short of a nuclear weapon in Afghanistan, the media cheered. And now that the CIA and Jeff Sessions are threatening to prosecute WikiLeaks and Julian Assange under the Espionage Act for publishing documents, you have major media figures, simply because they hate WikiLeaks and are incredibly shortsighted, supporting Jeff Sessions, supporting Mike Pompeo, in the idea that WikiLeaks’s publication of documents should be criminalized, even though that can then be turned around and used against them. So, no, they place off-limits certain policies that are really dangerous, even if Trump is the one advocating them. 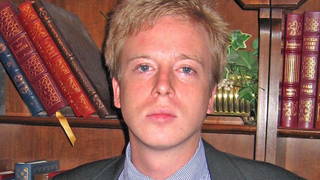