Since President Trump’s inauguration, the United States and the world have been rocked with a series of massive nationwide days of action, including the Women’s March, the People’s Climate March, the March for Science and the March for Truth. Just this weekend, more than 4,000 people joined the People’s Summit in Chicago. For more on the resistance to Trump, we speak with best-selling author and journalist Naomi Klein. Her new book, out this week, is “No Is Not Enough: Resisting Trump’s Shock Politics and Winning the World We Need.”

AMY GOODMAN: I want to ask you about healthcare. You come from Canada. This weekend, I mean, it was a major topic of discussion at the People’s Summit, because you had National Nurses United, a thousand nurses at this 4,000-person event. And yet, this moment, where you talk about how critical it actually is to seize upon what’s happening, the—we just have this—on Monday, Senator Sanders tweeted, ”BREAKING: Senate Republicans just released a schedule of hearings, committee markups public testimony for their health care bill.” His tweet includes the image of a blank white piece of paper. Wouldn’t this be the moment where people across the country—in fact, some polls suggest the majority of people in the United States—

NAOMI KLEIN: Right. And this is starting to happen, because, you know, I think this is also part of the Sanders effect, of seeing how popular it was to stand before the country and talk about single payer on the Canadian model, right?

AMY GOODMAN: And yet he hasn’t introduced a new bill at this point for single payer.

NAOMI KLEIN: But in California, the Senate just got one step closer. The California Senate just got one step closer to single payer at the state level, right? And this is—you know, there is a vacuum that’s being created by the Trump administration going rogue on all of these fronts. And it is creating a space for boldness at the subnational, at the municipal level. You know, climate is an example. Healthcare is an example. Imagine if we were to see this proliferate across the country, and people realized and experienced in their lives that it is possible to have a far less bureaucratic system, a much simpler system, with quality healthcare that is cheaper.

You know, this is what we have in Canada. And, you know, unfortunately, it has been under ceaseless attack by various politicians that have underfunded it, but it’s still—you know, it’s still a good system, despite what people hear a lot. You know, you hear a lot of attacks on the Canadian system, endless waits. And I don’t want to idealize it, but then, you know, look at what just happened with Jeremy Corbyn in the U.K., to bring him back into the conversation. I mean, some of his most powerful messages were about the NHS and what has happened—

NAOMI KLEIN: Yeah, the public healthcare system, which has been systematically starved in order to get it ready for privatization. And he just named that. And he made these very powerful campaign ads, including one, a beautiful one directed by Ken Loach, that featured nurses and doctors, including a pediatrician who broke down crying about having to send a child to be hospitalized 500 kilometers away from where his family lived and where they couldn’t visit him. And people stepped forward and were galvanized by a desire to reclaim the system, because when you have universal public healthcare, no politician can run against it. That’s why they have to chip away at it bit by bit. And always, every politician, no matter what party, will always claim they are defending the public healthcare system, whether in the U.K. or in Canada, because they will not get elected. So what they do is they try to kill it by these little—you know, a thousand cuts, and then they say, “Well, it’s impossible. The waiting lists are too long.”

JUAN GONZÁLEZ: I wanted to ask you—No Is Not Enough, the title of the book—you’ve talked about that the movement needed to have a vision of the world it wants. Talk about the Leap Manifesto and what it represents.

NAOMI KLEIN: Right. So, you know, what I argue in the book is that the greatest victory of the neoliberal project really comes back to what Margaret Thatcher said many decades ago, which is that there is no alternative, that however bad these policies are for your life, the alternative would be even worse. It would be sort of economic apocalypse. And I think that when we cast our minds back to the response to the 2008 crisis and the first wave of resistance, like Occupy Wall Street and the movements of the squares across Europe, that the spell of neoliberalism was breaking, and people had the courage to say, “No, we don’t want this model,” but somehow lacked the courage to step forward and say, “This is what we want instead. This is the economy that we believe is workable. We have the resources in this time of unprecedented private wealth to provide the basics for everybody—quality healthcare, quality education, housing for all. You know, we can—we understand that war is making us less safe. We want to be a society that welcomes refugees and those in need”—I mean, a transformative vision—”And we believe we can do this in a way that gets us to 100 percent renewable energy as quickly as technology allows, and, in the process, we can create huge numbers of unionized jobs.” People—we weren’t there yet. We didn’t have the confidence yet. And I think this is just the hangover of neoliberalism. But that is really changing.

The Leap Manifesto is an example of that in Canada, of movements coming together. It was endorsed by 220 organizations, very broad range of organizations, from small grassroots groups to large NGOs to the largest trade union in Canada, labor federations, coming together to try to sketch out that yes, what is a progressive trade policy, and how do we get—make this bold transition off of fossil fuels in a way that begins to heal some of the wounds that date back to the brutal founding of our country, that puts indigenous rights at the center of it, racial justice at the center of it, that connects migration to climate change, to war, to bad trade deals. You know, it is not a perfect document, but I include it as an example of what I describe in the book as a sort of a reawakening of the utopian imagination. In this country, I would point to the Vision for Black Lives, the document that came out during the election campaign out of the Movement for Black Lives, which is, you know, an incredibly bold people’s platform.

And we are in this moment in the sort of Trump resistance where there’s a lot of uncertainty about what the electoral strategy is. You know, I was at the People’s Summit. It was fantastic. But I didn’t leave it knowing what the plan was, in the sense of it wasn’t clear who the candidates are going to be the next time around. It wasn’t clear if it was a strategy wholly inside the Democratic Party or whether there were people there who were talking about wanting to form a party outside. This is—you know, this is a question that I certainly can’t settle. I’m not in a position to settle this. But what I do know is that social movement are surging. And I think that we are in a position where we could have really bold people’s platforms that emerge from below. And there’s lots of examples of this starting to happen as movements come together out of their silos to get clear on what the demands are, what the yes is. And then, whoever the politician is, whoever the party is, they have to follow that people’s platform.

AMY GOODMAN: And the media has to be there, too. I mean, you had The Globe and Mail calling the Leap Manifesto—

NAOMI KLEIN: No, that was—”national suicide,” that may have been the National Post. But The Globe and Mail just called it “madness.” It’s called the Leap Manifesto, caring for the planet and each other. And they were like, “That’s insane!” You know? “It will kill the country.”

AMY GOODMAN: And do you see the media changing, as more and more people join media in different ways, and the independent media?

NAOMI KLEIN: Yeah, I mean, what I see is it not—is it not hurting us. I mean, the more—I mean, one of our national newspapers, the National Post, ran 35 negative articles about the Leap Manifesto and then refused to publish one letter to the editor trying to correct the record, you know? But people kept signing it, you know? And I guess we have the tools to—you know, it’s a 1,400-word document.

NAOMI KLEIN: We can—people can read it themselves and make up their own mind. And I think there’s such a distrust of the traditional punditocracy, that, Amy, you have described the people who know so little about so much. And I think people are finally catching up to you and understanding that.

AMY GOODMAN: So, ultimately, do you hold out hope?

NAOMI KLEIN: You know, I think this is this moment where progressive ideas are more popular than they’ve been in my lifetime, but on the other hand, so are white supremacist ideas. And that is playing out on real bodies in real time on the streets. It is a race against time.

AMY GOODMAN: Naomi Klein, best-selling author, journalist, columnist for The Intercept. Her latest book is out today; it’s called No Is Not Enough: Resisting Trump’s Shock Politics and Winning the World We Need. 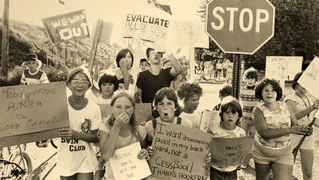