Arundhati Roy Reads from Her Acclaimed New Novel, “The Ministry of Utmost Happiness”

Twenty years ago, Indian writer Arundhati Roy published the groundbreaking novel “The God of Small Things.” It won the Booker Prize and catapulted Roy to international fame. But her readers have had to wait 20 years to read Roy’s next novel, “The Ministry of Utmost Happiness,” which was just published. This is Arundhati Roy reading an excerpt from her acclaimed new novel.

AMY GOODMAN: This is Democracy Now!, democracynow.org, The War and Peace Report. I’m Amy Goodman, with Nermeen Shaikh. Our guest for the hour, Arundhati Roy. Would you read from The Ministry of Utmost Happiness, Arundhati?

ARUNDHATI ROY: Sure. I’ll read a part, which is when Anjum, who—Anjum is born.

“She was the fourth of five children, born on a cold January night, by lamplight, in Shahjahanabad, the walled city of Delhi. Ahlam Baji, the midwife who delivered her and put her in her mother’s arms wrapped in two shawls, said, ’It’s a boy.’ Given the circumstances, her error was understandable.

“A month into her first pregnancy Jahanara Begum and her husband decided that if their first baby was a boy they would name him Aftab. Their first three children were girls. They had been waiting for their Aftab for six years. The night he was born was the happiest of Jahanara Begum’s life.

“The next morning, when the sun was up and the room nice and warm, she unswaddled little Aftab. She explored his tiny body—eyes nose head neck armpits fingers toes—with sated, unhurried delight. That was when she discovered, nestling underneath his boy-parts, a small, unformed, but undoubtedly girl-part.

“Is it possible for a mother to be terrified of her own baby? Jahanara Begum was. Her first reaction was to feel her heart constrict and her bones turn to ash. Her second reaction was to take another look to make sure she was not mistaken. Her third reaction was to recoil from what she had created while her bowels convulsed … Her fourth reaction was to contemplate killing herself and her child. Her fifth reaction was to pick her baby up and hold him close while she fell through a crack between the world she knew and worlds she did not know existed. There, in the abyss, spinning through the darkness, everything she had been sure of until then, every single thing, from the smallest to the biggest, ceased to make sense to her. In Urdu, the only language she knew, all things, not just living things but all things—carpets, clothes, books, pens, musical instruments—had a gender. Everything was either masculine or feminine, man or woman. Everything except her baby. Yes of course she knew there was a word for those like him—Hijra. Two words actually, Hijra and Kinnar. But two words do not make a language.

“Was it possible to live outside language? Naturally this question did not address itself to her in words, or as a single lucid sentence. It addressed itself to her as a soundless, embryonic howl.

“Her sixth reaction was to clean herself up and resolve to tell nobody for the moment. Not even her husband. Her seventh reaction was to lie down next to Aftab and rest. Like the God of the Christians did, after he had made Heaven and Earth. Except that in his case he rested after making sense of the world he had created, whereas Jahanara Begum rested after what she had created had scrambled her sense of the world.”

AMY GOODMAN: Arundhati Roy, reading from her new novel, The Ministry of Utmost Happiness. So, introduce us to some of your characters and where and how they lived. Introduce us to the trans community that has—you’ve both created and you’ve been living with for so many years now.

ARUNDHATI ROY: Well, first, I do want to say that, you know, Anjum, who was Aftab, or the book in general, is—you know, she’s not a signifier. This is not a sort of social history of the trans community. I mean, she’s a character, like many other characters in the book, very unique, very much herself. And when she’s born in the walled city and grows up, and then when she—she actually moves out of her home to a place close by called Khwabgah, which in Urdu means “the House of Dreams,” where she lives with a community of other people, none of whom is like herself. You know, even inside the Khwabgah, though there are many trans women, people who are—Anjum, for example, she’s a hermaphrodite, but there are others who are men, who are Muslim and don’t believe in having surgery, some who do. There are Hindus. There are Sunnis. There are Shias. So, they themselves are a very diverse community. But they look at the world and call it duniya, which means “the world” in Urdu, which is something else. But they have a history of being sort of inside and outside the community, which sort of predates the kind of Western, liberal, rights-based discourse, though, even in the story, as it modernizes, you know, there is that feudal story overlapping with the new, modern language and so on.

But actually, Anjum, though she does have this incendiary border of gender running through her—all the characters have a border, which is, for example, one of the—she moves into the graveyard, and she builds—eventually, she builds a guest house, called Jannat, which is the Paradise guest house. And one of the people who becomes a very close comrade of hers is a young man who was—who is a Dalit, who has watched Hindu mobs beat his father to death, as is happening every day now with Muslims and Dalits, because he was transporting a carcass of a dead cow, and so he’s beaten to death by people who call themselves cow protectors. And he converts to Islam, and so—and calls himself Saddam Hussein, because he’s very impressed by this video he sees of Saddam’s execution and the disdain he shows for his executioners. So Saddam has this border of caste and religious conversion—incendiary in India—running through him. The other major character is a woman called Tilottama from the south, and she is also a person of indeterminate origins as far as India is concerned. There’s Musa, who is now a Kashmiri, fighting, with the national border running through him.

So, it’s not conceptual. I mean, what happens is that India is a society of such minute divisions, such institutionalized hierarchies, where caste is a mesh that presses people down and holds them down in a grid. And so, all these stories somehow are about people who just don’t fit into that grid and who eventually create a little community, and a kind of solidarity emerges, which is a solidarity of the heart. You know, it’s not a solidarity of memorandi or academic discourse, but a solidarity which is human, which is based on unorthodox kinds of love—not even sexual love or anything, it’s just based on humanness. And yeah, so.

NERMEEN SHAIKH: So, what you say, you say that the characters are kind of—who don’t fit into the grid. The places, the principal places, where the novel is set are Old Delhi, the walled city, as you said, and Kashmir. So, is the focus—did you focus on these places also because they stand somehow outside the grid, they don’t fit into the grid?

ARUNDHATI ROY: Yeah, it’s not just Old Delhi and Kashmir. Actually, it starts in Old Delhi, and it spools out into the New Delhi, the modern, sprawling metropolis, supposedly the center of power of the new India, and then into Kashmir. And, actually, you know, the thing is, when you write a novel, you don’t think about it conceptually. It would be terrible to do that. So, I—you know, as I go along and have to talk about it, these concepts emerge, and it sounds as if that’s what it’s about. It’s not, though.

So, the nerve center of the book—though it’s not the start of the book, the nerve center is this place in Delhi called Jantar Mantar, where all the ragged and beautiful resistance movements, all the dreamers and idlers and nutjobs and protesters, you know, gather. It’s a wonderful place in Delhi—no longer, though. I mean, it’s being—that, too, is being policed in terrible ways. And it’s a place where I have actually spent much of—much of my time. And a baby appears in the middle of the night, and nobody knows whose baby it is. And it actually happened to me. And there were all these protest movements, all this politics, all this wisdom, all this beauty, and then the baby just—nobody just—just nobody knew what to do with her, you know?

And from there, you know, the nerves of the novel spread out, because all of it is brought together in that place. And then you follow the appearances and disappearances of these baby girls. And a team of graveyards, of course—I mean, Anjum builds the Paradise guest house on a graveyard in Delhi, whereas Kashmir, which is called Jannat, which is “paradise,” by many people, is a paradise that’s covered in graveyards. You know, so, the graveyards are also—I mean, apart from the borders inside the characters, graveyards are also the borders between the living and the dead. And also there are porous borders between human beings and animals in the book. So, it’s a book of porous borders. 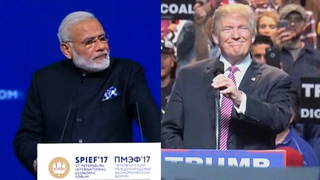