The Endless War in Afghanistan Just Got Longer We have two presidents in the United States: The “real Donald Trump” and “teleprompter Trump.” Real Trump speaks, and tweets, his mind. Teleprompter Trump reads speeches prepared for him, delivered in a strained manner that has been likened to a hostage video. Both have been on full display lately, from his rants asserting moral equivalence between neo-Nazis and anti-fascist activists who gathered to oppose them, to attacking the media and threatening to shut down the government if he doesn’t get his border wall.

But it was his teleprompter address last Monday, when President Trump promised that the war in Afghanistan — the longest war in U.S. history — would continue, that might have been the most frightening of all, ensuring more suffering and death for U.S. service members and Afghan civilians alike.

“Vile and disgusting fear-based demagoguery,” was the reaction of Matthew Hoh, speaking on the “Democracy Now!” news hour. “I’m greatly saddened because there was nothing in that speech besides the prospect of more killing.”

Hoh is a combat veteran, a former Marine company commander who fought in Iraq. He then worked in the U.S. State Department in Afghanistan, resigning from the position in September 2009. In his four-page resignation letter, Hoh wrote: “I fail to see the value or the worth in continued U.S. casualties or expenditures of resources in support of the Afghan government in what is, truly, a 35-year-old civil war. … I do not believe any military force has ever been tasked with such a complex, opaque and Sisyphean mission as the U.S. military has received in Afghanistan.”

Donald Trump long advocated for a U.S. withdrawal from Afghanistan. In October 2011, he tweeted: “It is time to get out of Afghanistan. We are building roads and schools for people that hate us. It is not in our national interests.” In January 2013, in a rare admission of agreement with then-President Barack Obama, he tweeted: “I agree with Pres. Obama on Afghanistan. We should have a speedy withdrawal. Why should we keep wasting our money — rebuild the U.S.!” Then, in 2016, he won the Electoral College and, despite losing the national popular vote by 3 million votes, became president.

“Shortly after my inauguration, I directed Secretary of Defense Mattis and my national security team to undertake a comprehensive review of all strategic options in Afghanistan and South Asia,” teleprompter Trump said Monday at his speech delivered at Fort Myer, right next door to Arlington National Cemetery. Trump’s senior circle in the White House has been winnowed down to his family members and his generals: chief of staff Gen. John Kelly, Secretary of Defense Gen. James “Mad Dog” Mattis, and national security adviser Lt. Gen. H.R. McMaster. After a weekend sequestered at Camp David with these and other military advisers, Trump announced in his Fort Myer address his commitment of thousands more troops and tens of billions more taxpayer dollars to the war in Afghanistan.

Kathy Kelly, like Matthew Hoh, has extensive experience in Afghanistan, as a peace activist with Voices for Creative Nonviolence, twice nominated for the Nobel Peace Prize. She agrees with Hoh that the U.S.-supported government in Kabul has collapsed and isn’t providing any security against the various Afghan warlords.

“The United States is one among many warlords right now,” she explained on “Democracy Now!” “It’s certainly the heaviest-armed warlord with the most access to funding, but it’s not the case that the United States has been shoring up some kind of governance that’s been advantageous to people in Afghanistan.”

The New York Times recently reported that President Trump is being informally advised on Afghanistan by billionaire financier Stephen Feinberg, who owns the military contractor DynCorp, and that Trump may be pursuing U.S. control of Afghanistan’s untapped mineral wealth, worth an estimated $1 trillion. Kathy Kelly responds: “Afghanistan is a country that needs to be able to feed its people, not sending them down into the dungeons and mines to work as serfs. To restore that agricultural infrastructure would require reseeding the orchards, cleaning out the irrigation systems, replenishing the flocks. It would require weening people off of the opium trade. Those are things that could be done.”

President Trump should spend the weekend at Camp David with peace activists, as well as with Afghan civilians, who know their country and its suffering better than anyone. Given what we’ve learned about Donald Trump in his first seven months as president — whether the real Trump or the teleprompter man — we can assume such a gathering is not in the script. 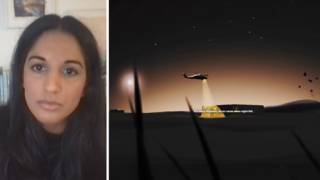