In the past month, more than 1,200 people have died amid flooding in Bangladesh, Nepal and India. This year’s monsoon season has brought torrential downpours that have submerged wide swaths of South Asia, destroying tens of thousands of homes, schools and hospitals and affecting up to 40 million people. Aid organizations are warning that this is one of the worst regional humanitarian crises in years, with millions of people facing severe food shortages and disease caused by polluted floodwater. Flood victims in southern Nepal say they have lost everything. We speak with Asad Rehman, executive director of War on Want. He has worked on climate change issues for over a decade.

JUAN GONZÁLEZ: While Houston remains underwater after a historic storm, we turn now to look at massive flooding across the globe in South Asia. Over the past month, more than 1,200 people have died amidst flooding in Bangladesh, Nepal and India. This year’s monsoon season has brought torrential downpours that have submerged wide swaths of South Asia, destroying tens of thousands of homes, schools and hospitals and affecting up to 40 million people. Flood victims in southern Nepal say they have lost everything.

AMY GOODMAN: Aid organizations are warning this is one of the worst regional humanitarian crises in years, with millions of people facing severe food shortages and disease caused by polluted floodwater.

We go now to London to speak with Asad Rehman, who is executive director of War on Want. He’s worked on climate change issues for over a decade.

Asad, welcome back to Democracy Now! We usually see you at the U.N. climate summits. Talk about—let’s take one country, Bangladesh. A third of Bangladesh is underwater? Can you talk about how many people have died just in the last few weeks there, and the significance of what is happening now in this region, and its connection to two words you almost never hear—I’m not only talking about Fox, but on MSNBC and CNN, as they cover the devastation in Houston almost 24 hours a day—and those two words, of course, “climate change” or “climate chaos” or “climate disruption”?

ASAD REHMAN: Well, thank you, Amy, and thank you for the invitation to join you.

Yeah, absolutely. When you look at the devastating pictures, of course, now what we’ve seen in the United States, the pictures that are emerging from right across the region, in Nepal and India and Bangladesh, are absolutely devastating. In Bangladesh, one-third of the country is underwater. Millions of people are being affected. I mean, hundreds of people have lost their lives, but we are still waiting to see what an accurate count will be.

And we’re talking about a country where 50 percent of the population is below the poverty line, where the per capita income of Bangladesh is about $1,500. And if you compare that to an average U.S. citizen, which is about $55,000—and, of course, there is inequalities in the United States, but we’re talking about some of the most poorest and most vulnerable people.

And, of course, Bangladesh is uniquely vulnerable to flooding because of its geography. It’s a low-lying basin. But what you’ve heard continuously is that the monsoon rains are becoming more intense, stronger and more devastating year upon year. And this is for two reasons. One, as temperatures increase and we’re seeing warming across the globe, the glaciers and the snowmelt are swelling rivers as they come through, down from the Himalayas, through Nepal, India and into Bangladesh, where they go into the sea. At the same time, warming temperatures in the sea means that there’s more moisture in the atmosphere, which means more intense and heavier rains.

Now, this is not something new. Climate scientists have been telling us and have predicted what would be happening, that these kind of storms, these intensity of storms, which used to happen every few hundred years, would happen much more regularly and every decade, and now become literally an annual thing. The problem is, of course, is the ability of people and the government to be able to respond. When you have these floods which wipe away infrastructure, schools, hospitals, roads, it’s very, very hard to rebuild. And, of course, these are countries which have had and do have flood systems, and those are overwhelmed.

Now, if in the United States, which is a country with—I think it’s about $18.5 trillion global GDP every year—in Bangladesh it’s only about $220 billion. So the ability of these poor countries who are most vulnerable to be able to continuously rebuild, to be able to protect their citizens, is, of course, severely limited. And these impacts are, of course, not only going to be felt today. They are going to be felt tomorrow and the days and the weeks and the months after, because for many of the people, people who are subsistence farmers, people who rely on their crop to both feed their families and to be able to sell some to be able to survive the year, most of them have lost their crops already.

Much of the food production in one of the most important basins—the Ganges Basin is one of the bread baskets, the food baskets, of the region. And this and the Indus basket have both been impacted severely by climate impacts and are predicted to get even worse in the coming years.

AMY GOODMAN: The floods come just weeks after researchers at the Massachusetts Institute of Technology published a report saying soaring temperatures could make parts of South Asia too hot for human survival by 2100. The MIT researchers concluded as many as one-and-a-half billion people living in areas that could become uninhabitable during summer heat waves within only 83 years, if climate change continues at its current pace. India, Pakistan and Bangladesh would be the worst-affected areas. In 2015, some 3,500 people died in the heat wave that struck India and Pakistan. Asad, as you look at the images of Houston, the U.S.'s fourth-largest city, and you look at what's happening in your region of the world, in South Asia, final thoughts on what you feel needs to happen, as President Trump today goes to Texas, the leading climate denier in the United States who has pulled the U.S. out of the Paris climate agreement?

ASAD REHMAN: Well, as you said, the MIT report simply builds on what climate scientists have already told us, that South Asia will be one of the most vulnerable regions in the world. And as you said, one-and-a-half billion people. Scientists are predicting up to 70 percent of the population will be directly impacted by climate impacts. The drought—the heat wave that you talked about, that was at 49.5 degrees centigrade. Earlier this year in May, Pakistan recorded a temperature level of 51 degrees centigrade. Now, for the majority of people who have to spend long hours out in the open as farmers, this is simply intolerable. People cannot survive out in the open.

So the implications and the impacts that we’re talking about will be absolutely devastating. And they’re devastating now, and they’re likely to get much, much worse. And, of course, the economic impacts are also devastating, for a region which is one of the poorest regions of the world. Climate scientists have said that just the impacts in terms of GDP will be running in the region of hundreds of billions of dollars.

Now, when I look at the pictures of Houston, and I—

ASAD REHMAN: When I look at the pictures of Houston, I hope that Donald Trump—I understand he’s going to Texas. Maybe probably he’d be better going to Paris, Texas, and maybe better going there and recognizing that the culpability of him, of the fossil fuel industry that back him, of deliberately turning their back on climate change, on deliberately turning their back on taking action on climate change, is not only culpable for the impacts that are happening in Houston, but happening all around the world. The window is closing. Action is needed now. And really, Donald Trump needs to wake up and smell the roses.

AMY GOODMAN: Asad Rehman, I want to thank you for being with us, executive director of War on Want, has worked on climate change issues for over a decade, speaking to us from London. This is Democracy Now!, democracynow.org, The War and Peace Report. I’m Amy Goodman, with Juan González. 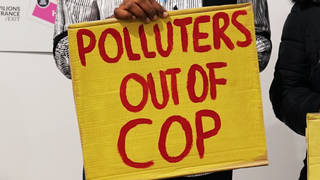