We turn to the devastating floods in South Asia, where more than 41 million people have been battling floods and displacement. More than 1,300 people have died in Bangladesh, India and Nepal in recent months, after the region was hit by the worst flooding in at least 40 years. Some 40 million more people have seen their homes, businesses or crops destroyed. In the coming decade, devastating floods are expected to increase as changing weather patterns worsen risks in the region, climate researchers say. Flooding accounted for 47 percent of all weather-related global disasters between 1995 and 2015, the United Nations Office for Disaster Risk Reduction said in a report. Of the 2.3 billion people affected, 95 percent were in Asia. We speak with David Molden, the director general of the International Centre for Integrated Mountain Development in Kathmandu, Nepal. The group works in eight countries across South Asia: Afghanistan, Bangladesh, Bhutan, China, India, Myanmar, Nepal and Pakistan

AMY GOODMAN: This is Democracy Now!, democracynow.org, The War and Peace Report. I’m Amy Goodman. We turn to the devastating floods in South Asia, where more than 1,300 people have died in Bangladesh, India and Nepal in recent months, after the region was hit by the worst flooding in 40 years. The impact of the flooding is staggering. Some 40 million people have seen their homes, businesses, crops destroyed—one-and-a-half million homes destroyed. Thirty to 40 percent of those killed were children. Vast swaths of farmland have been destroyed. In Bangladesh, a third of the country is underwater. In Nepal, local residents said entire villages have been destroyed.

So we’re going to go to the capital of Nepal now, to Kathmandu, where we’re joined by David Molden, director general of the International Centre for Integrated Mountain Development. The group works in eight countries across South Asia: in Afghanistan, Bangladesh, Bhutan, China, India, Burma, Nepal and Pakistan.

DAVID MOLDEN: It is indeed staggering, with the flood event that happened. I was in the plains of Nepal. Nepal is famous for the mountains, but connected to it is this vast plains that stretches from the mountains to the seas. And it looked like the monsoon was failing. But then, on the 11th of August, some massive rains hit. So we got about 20 inches of rain in 40 hours. And the floods started up in Nepal and in Assam. They moved into India and then finally moved into Bangladesh, inundating large areas of land, as you have just said.

Now, one factor is that this area, South Asia, has about 40 percent of the world’s poorest people. And actually, most of those poor people live in that flood-affected areas. And most of them are dependent on agriculture and the environment for their livelihoods. So what you saw is—and you had the statistics there—the loss of lives, the loss of houses, the rice fields, the animals. So their whole livelihoods are really damaged by this storm. So it’s been in an immense tragedy in the region.

AMY GOODMAN: Can you talk about the connection between these floods and climate change, David?

DAVID MOLDEN: Yeah. So, you know, this region, the Himalayas, is really a hot spot for climate change. So, temperatures rise faster at higher elevations. So, if we’re seeing a 2-degree world in the future, as we hope for, it might be 3 or 4 degrees up high on the mountains. So we see glaciers melting already due to climate change.

But what I really worry about is the effects on the monsoon patterns—right?—which are hugely important for the region. So, what the climate science tells us is that we’re likely to see more extreme events, more floods and droughts in the future. So this event was caused by rainfall, for sure. It’s always hard to pin that event with climate change, but, for sure, in the future, we’re bound to see more events like this, and even worse, due to climate change. So there’s a direct link.

Now, in addition to that, who bears the brunt of that climate change? It is the poor people, as we saw in the most recent floods. Those poor people are the ones who are really not the ones who are emitting greenhouse gases into the world, but they are the ones that have to bear the burden. Finally, you know, it’s a driver of human mobility, of people movement, of migration from the region. So we’ll see all kinds of knock-on effects from this kind of flood event.

AMY GOODMAN: Now, you’re in Nepal right now, but you’ve just come back from the United States. Your thoughts on President Trump, a well-known climate change denier, proud climate change denier? You know, as Hurricane Irma was pummeling the Caribbean, heading to the U.S. last week, and Houston was underwater, he was in Mandan, North Dakota, in front of a refinery, celebrating the fact he had pulled the country out of the Paris climate accord.

DAVID MOLDEN: Well, you know, that pulling out of the Paris climate accord is certainly bad news for our region. Like I said, it’s already impacted by climate change. I feel very much we have a global responsibility to put actions in place to prepare for climate change, and, of course, actions to actually slow it down. So what we do need is the world coming together, and Paris was doing that for us. And people in the mountains were very much behind the Paris accord and even wanted more than we’re seeing. So, I feel that if there’s any message, yes, please, let’s get back in the game.

AMY GOODMAN: We have 10 seconds. The U.S., the historically greatest greenhouse gas emitter’s responsibility, you feel, to where you are in Nepal? Ten seconds.

DAVID MOLDEN: Yes, yes. The people who are emitting greenhouse gases are indeed impacting glaciers, impacting the weather system in Nepal. So there is a shared responsibility to do something about that, as well.

That does it for the show. Democracy Now! co-host Juan González is speaking in Austin tonight. Check our website. And a very happy birthday to Sam Alcoff. 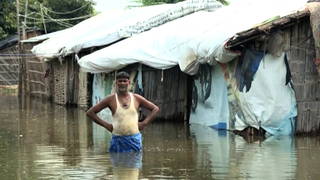