The executive director of New York City’s New Sanctuary Coalition has been detained by Immigration and Customs Enforcement. Ravi Ragbir is a nationally known immigrant rights activist whose wife and daughter are U.S. citizens. Born in Trinidad and Tobago, Ravi has lived in the United States for 27 years, but he faces deportation because of a 2002 wire fraud. On Thursday morning, Ravi was taken into custody, sparking a peaceful protest that was met with police violence. Police arrested 18 people including members of the New York City Council. Democracy Now’s Renée Feltz was there.

AMY GOODMAN: And the executive director of New York City’s New Sanctuary Coalition has been detained by Immigration and Customs Enforcement. Ravi Ragbir is a nationally known immigrants’ rights activist whose wife and daughter are U.S. citizens. Born in Trinidad and Tobago, Ravi had lived in the United States for 27 years, but faces deportation because of a 2002 wire fraud conviction, for which he already served time in jail.

Democracy Now! has closely followed Ravi’s case. He was on the show in March, the day of his last check-in, when he was told to return in January. Well, on Thursday morning, Ravi was taken into custody, sparking a peaceful protest that was met with police violence. Democracy Now!’s Renée Feltz was there.

RENÉE FELTZ: At 26 Federal Plaza in downtown Manhattan, Ravi Ragbir met with ICE for his regular check-in. Outside, hundreds circled the building in a Jericho walk, some raising their hands to pray he’d come out. Ravi went in accompanied by his lawyer and wife and several city councilmembers and state lawmakers. After nearly two hours, City Council Speaker Corey Johnson came out with an update.

SPEAKER COREY JOHNSON: Ravi had passed out. An ambulance had arrived.

RENÉE FELTZ: Johnson said Ravi fainted when ICE agents told him he was being detained. Just as Johnson spoke, an ambulance pulled up, that people believed was carrying Ravi in handcuffs, on its way to an immigrant jail blocks away.

RENÉE FELTZ: New York police officers violently shoved people out of the way who were shouting support, some crying. As the ambulance drove down Broadway, City Councilmembers Ydanis Rodríguez and Jumaane Williams sat down to block its way, and were violently handcuffed and marched away. At least 18 people were arrested. The police union later claimed the ambulance was headed to a hospital. Hundreds regrouped hours later for a vigil in front of the ICE jail on Varick Steet where Ravi was reportedly taken.

RENÉE FELTZ: Ravi’s wife Amy joined in a Jericho walk around the jail, as she has often done with her husband in weekly vigils.

AMY GOTTLIEB: [echoed by the People’s Mic] Ravi Ragbir is here with us in spirit, and he knows that we are going to win this fight and that nobody is backing down.

RENÉE FELTZ: ICE said, late Thursday, that Ravi had, quote, “exhausted his petitions and appeals.” Ravi’s lawyer, Alina Das, disagreed and told Democracy Now! what happened when Ravi was told he was being deported.

ALINA DAS: Well, we went in to the check-in with Ravi and his wife Amy, and we were told by the immigration representative that they would be trying to enforce the deportation order and they would be taking him in. It was horrible news to receive. We had been in conversations with ICE for many years, and Ravi has been receiving stays of removal in recognition of both his community and family ties, his contributions as a leader, executive director of the New Sanctuary Coalition, and also in recognition of the legal challenges that we have filed, that would actually have a chance of resolving his case and allowing him to stay here.

They didn’t allow me to accompany him as he left the building. They put handcuffs around him, and they led him to a secure part of the facility, and they escorted me out. So I have not been able to talk to him since that moment, to reassure him that we continue to fight for him. But I believe that he knows—he knows what’s happening here. This is the kind of community mobilization, the community support, that he has certainly galvanized for other people who have been in similar situations over the years. And I think he would take great comfort in knowing that the community has rallied behind him.

AMY GOODMAN: Ravi Ragbir’s lawyer, Alina Das. Thanks to Democracy Now!'s Renée Feltz and Nat Needham for that report. A federal court has now responded to an appeal Ravi's lawyers filed Thursday, setting a new hearing for January 29th and issuing a temporary stay of removal and a temporary order blocking Ravi Ragbir’s transfer away from the New York region. This comes as ICE’s online detainee locator system lists Ravi as being detained in Florida at the Krome detention facility, and neither his family nor his lawyers know for sure where he’s been taken. We’ll continue to follow the case, and you can watch democracynow.org for updates.

This is Democracy Now!—these are the headlines—democracynow.org, The War and Peace Report. I’m Amy Goodman. Back after this break. 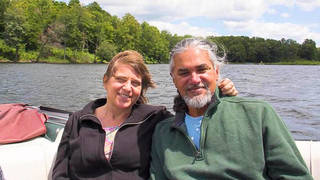