On Thursday, a federal judge in Montana temporarily halted the construction of the controversial Keystone XL pipeline, which would carry oil from Canada’s tar sands region in Alberta to refineries as far away as the Gulf of Mexico. The court’s decision will require the Trump administration to review more thoroughly the potential negative impacts of the pipeline on the surrounding environment and climate change. President Obama halted the construction of the pipeline, which is being built by TransCanada, in 2015 following mass public protests, but Trump reversed the order shortly after he came into office. Environmental and indigenous groups hailed the decision Thursday. Sierra Club attorney Doug Hayes said in a statement, “The Trump administration tried to force this dirty pipeline project on the American people, but they can’t ignore the threats it would pose to our clean water, our climate, and our communities.” We speak with May Boeve, executive director of 350 Action, the political arm of the climate organization 350.org.

JUAN GONZÁLEZ: May, I wanted to ask you—in terms of the issue of the long-term solutions, in the face of total inaction from the federal government, I’m wondering if you could talk about the lawsuit, with the help of Our Children’s Trust, with a group of young people suing the government over its failure to act on climate change.

MAY BOEVE: We are so celebrating the work of these brave, young activists who have brought this incredible suit against the federal government. They just received a stay from the 9th Circuit Court just recently, and so their case is getting momentum.

And what they’re claiming is so important for everyone to know about. They are claiming that the federal government’s inaction on climate is putting their future at risk. And they are using the courts to demonstrate that. And the courts, not only with climate, but with so many important issues—migration, mass incarceration—the courts are becoming one of our last lines of defenses against this reckless administration.

Not only this suit, but a number of cities have brought litigation against the oil industry for climate damages. The city of San Francisco has done this, and numerous others around the country and, increasingly, around the world. So, we know who’s responsible for climate change. That’s not a mystery, either. The solutions are clear, and the perpetrators are clear. And people are starting to hold the fossil fuel industry accountable.

AMY GOODMAN: In fact, that case, the kids’ case around climate change, that started under Obama, has been given the go-ahead to proceed by the Supreme Court. I also wanted to ask you about another judicial decision: the routing of the Trump administration around the Keystone XL pipeline, on Thursday a federal judge in Montana temporarily halting the construction of this controversial pipeline, which would carry oil from Canada’s tar sands region in Alberta to refineries as far away as the Gulf, the court’s decision requiring the Trump administration to more thoroughly review the potential negative impacts of the pipeline on the surrounding environment and climate change. President Obama halted the construction, which is being built by TransCanada, after years of mass protest. He stopped it in 2015. But one of his first official acts as president, Trump reversed the order shortly after and gave the green light for both the Dakota Access pipeline and Keystone XL. This is an amazing judicial decision, May.

MAY BOEVE: It’s a huge blow to the Keystone XL pipeline and to pipeline fights all over the world, where people are fighting to keep fossil fuels in the ground. And this was an incredible victory. And the indigenous peoples, the farmers and the ranchers along the route and all of their allies were celebrating this. And no one is going to stop keeping up the pressure.

But this is a massive setback. Trump and TransCanada will have to go back to the drawing board and show their work and demonstrate what, frankly, will be incredibly difficult to demonstrate, because we know that tar sands are one of the leading drivers of climate change, and we know that the pipelines out of the tar sands are what help exploit them. And not only that, but the decision also required that there be evidence about the cultural impact of this pipeline. And so there’s a lot of aspects that are going to challenge its future. And there was a lot of hard work that helped make this happen.

JUAN GONZÁLEZ: And, May, if you could talk briefly about a couple of defeats that occurred in the elections last week, in Colorado and Washington state, by—initiatives pushed by advocates seeking to address climate change?

MAY BOEVE: Well, we went into last week’s election clear that the fossil fuel industry is greeting the election of a lot of Republicans into houses of Congress. And so, we were trying to really do some good work to flip the House and to elect candidates who will actually take this issue seriously. And so, that was definitely something that was a focus.

But there were some real setbacks when it came to ballot initiatives. And we were paying attention to a lot of them, including the ones you mentioned. And in Colorado, what was at stake was a setback that would protect communities from fracking wells being near their homes and schools. And in Washington, what was at stake was an actual means on climate solutions around putting a price on carbon.

And in both cases, Big Oil poured in tens of millions of dollars—in Colorado, $41 million, and in Washington, $31.5 million. In Colorado, we were outspent 40 to 1 by Big Oil. And in both cases, it’s crucial to know that when those campaigns began, the public was overwhelmingly supportive of these initiatives. But when you start to warp the political process and drip it in oil money, these are the outcomes that we have.

And that is why we are so focused on the need to change the social life of this industry, who caused climate change, they know they caused it, they lie about it, and they profit from it. And here, we hear these stories of these massive disasters, and this industry has to be held accountable. So, while we did suffer some defeats in those fights, the lines of the battles are increasingly clear, and the movement is strong and resolved to fight.

AMY GOODMAN: We want to thank you so much, May Boeve, executive director of 350 Action, the political arm of the climate organization 350.org. Democracy Now! will be in Poland for the week of December 10th, covering the U.N. climate summit. So, do tune in to our special coverage.

This is Democracy Now! When we come back, we go to Gaza. Stay with us. 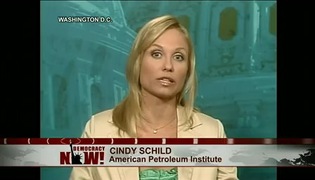