AMY GOODMAN: But, Ryan, I wanted to end, talking to you on a very different issue, the issue of the primaries in Pennsylvania yesterday.

RYAN GRIM: This is a huge wake-up call for the Democratic establishment. And one of the defeated Democrats even tried to hustle and run a write-in campaign to win the Republican nomination at the last minute, in southwestern Pennsylvania, because there were no Republicans running. It was an unopposed site. And so, he thought that, “Well, if I can get 10 votes or whatever, then I can get this nomination.” And that’s how desperate the establishment was here to cling to power, that they would do something so disgraceful to them, as these longtime Democratic partisans, as try to get the Republican ballot. That failed.

And out in Omaha, Nebraska, Kara Eastman, with the support of a wide array of progressive groups, but not the support of the more establishmentarian activist groups—she didn’t have the pro-choice groups, she didn’t have a lot of the environmental group support that relies on Washington for some of its political capital—she won anyway. She beat a former Republican, who had become a Democratic congressman in a primary in Omaha.

And so, that race and the others in Pennsylvania will put to the test in November something that the left has always said, that the way to win some of these swing seats is not with a former Republican, like Brad Ashford, who sort of still is one and lost in 2016, and you’re just going to run him again because you can’t think of what else to do—saying, “No, actually, put somebody up who’s for a $15 minimum wage, for free college, for Medicare for all, proudly pro-choice, who believes in what she says, and then let voters make a choice between what they have on the ballot.” Now we get to see that play out in November.

AMY GOODMAN: Ryan Grim, we want to thank you for being with us, Washington, D.C., bureau chief for The Intercept. Latest piece, we’ll link to at democracynow.org, “Ahead of Vote on Gina Haspel, Senate Pulls Access to Damning Classified Memo.” 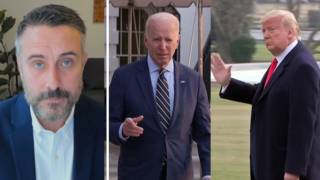