AMY GOODMAN: Former CIA operative and Cuban exile Luis Posada Carriles has died. He died on Wednesday just outside Miami. He was 90 years old. Posada Carriles is best known as the suspected mastermind of the 1976 bombing of a Cubana airline jet. For decades, the U.S. refused to extradite Posada Carriles for terrorism charges, despite demands by Cuba and Venezuela. He later publicly admitted ties to a series of hotel bombings in Cuba in 1997. In 2000, he was arrested in Panama City for plotting to blow up an auditorium where Fidel Castro would be speaking. Despite his record, Luis Posada Carriles died a free man in Florida.

For more, we’re joined by José Pertierra, a Cuban attorney based in Washington, D.C., represented the Venezuelan government in its efforts to extradite Luis Posada Carriles, and also represented Elián González in 2000, 2001, when Elián González was here in the United States, eventually sent back to Cuba to be with his dad.

The Cubana airline disaster in 1976 was, at the time, the worst airline passenger disaster or act of terrorism against a passenger airline in the history of aviation. It killed 73 innocent people, including 24 members of the juvenile fencing team from Cuba. There was a little 9-year-old girl on board named Sabrina. She also died. Posada Carriles was the mastermind of the bombing. He masterminded the placing of two bombs—one in the front of the plane, one in the back of the plane in the restroom—that exploded in midair. And the plane crashed into a bay called—near Paradise Beach in Trinidad. And no bodies—or, some bodies were recovered, but most of the bodies were not. They went to the bottom of the sea, where they’re still lying.

Venezuela presented charges against Posada Carriles, because there was overwhelming evidence of his involvement. There was even a confession by the persons who planted the bombs, who were arrested in Trinidad. They were interrogated, and they confessed to having worked for Posada Carriles. They even tried to communicate with Posada Carriles by telephone, by calling Caracas. This evidence was enough for Venezuela to charge him with 73 counts of first-degree murder. While the case—

AMY GOODMAN: We don’t have much time, José Pertierra, and I want to ask you—so, that happened, 73 people dead. How did he end up dying a free man in Miami this past Wednesday?

JOSÉ PERTIERRA: Amy, Venezuela—well, he escaped from jail in Panama, where he was being held, as you said, for trying to bomb an auditorium full of people. But after getting out of jail in Panama, receiving a pardon, he came to the United States to Miami. And Venezuela presented a request for extradition. And the United States simply refused to extradite him. Instead, they charged him with violating immigration law, lying on immigration forms, for which he was ultimately acquitted, even though there were admissions by Posada Carriles that he had masterminded a string of bombings in Havana that resulted in the murder of an Italian businessman. And he lied about those on the immigration forms.

But even though there was of that, including a taped confession of Posada Carriles to New York Times correspondent Ann Louise Bardach, nonetheless he was acquitted of that, and the U.S. refused to extradite him. Why? Because he was the United States’ man in Caracas. He worked for the CIA for, by his own admission, over 24 years. It just goes to show you, if you’ve got friends in high places, even though you may be a terrorist, the United States will protect you.

AMY GOODMAN: And I want to get to, before the end—Luis Posada Carriles’s death came days after a Cuban plane crashed and burned right after takeoff on Friday outside Havana, killing 111 people.

AMY GOODMAN: It was another Cubana airlines jet. Critics say the crash is partly due to the decades-old U.S. trade embargo, which makes it so difficult for Cuba to acquire newer aircraft. I believe this plane was something like 40 years old. In this last minute we have, can you talk about the fallout from this tragic crash?

JOSÉ PERTIERRA: Well, the investigation is going on. There’s absolutely no evidence it was an act of terrorism. It was either pilot error or something wrong with the plane.

And Cuba is doing everything in its power right now to investigate what happened. Two survivors are in critical condition. The prognosis is not good for one of them. And Cuba, I’m sure, will try to prevent this from happening again. But the best way for the United States to respond is not to give prayers and condolences, but to lift the embargo and allow Cuba to purchase planes with American parts and fly safely over Cuban skies.

AMY GOODMAN: José Pertierra, I want to thank you for being with us, Cuban attorney based in Washington, D.C., represented the Venezuelan government in efforts to extradite Luis Posada Carriles, who died on Wednesday a free man in Miami. 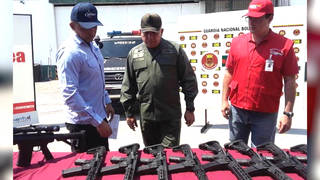