The Supreme Court ruled Monday in favor of a Colorado baker who refused to make a wedding cake for a gay couple, citing his religious opposition. In a narrow 7-2 decision, the justices faulted the Colorado Civil Rights Commission’s handling of the claims brought against baker Jack Phillips, saying the commission had shown a hostility to religion. Though the case pitted claims of religious freedom against the fight for gay rights, the ruling stopped short of setting a major precedent on whether businesses can deny people services because of their sexual orientation. For more, we speak with Ria Tabacco Mar, senior staff attorney with the ACLU’s LGBT & HIV Project and counsel of record for Charlie Craig and David Mullins in Masterpiece Cakeshop v. Colorado Civil Rights Commission.

JUAN GONZÁLEZ: The Supreme Court ruled Monday in favor of a Colorado baker who refused to make a wedding cake for a gay couple, citing his religious opposition. In a narrow 7-2 decision, the justices faulted the Colorado Civil Rights Commission’s handling of the claims brought against baker Jack Phillips, saying the commission had showed a hostility to religion. The case wound its way to the Supreme Court after a Colorado Court of Appeals decision affirmed the commission’s earlier decision that Masterpiece Cakeshop in Lakewood, Colorado, and its owner, Jack Phillips, violated the Colorado Anti-Discrimination Act when he declined to make a cake for Charlie Craig and David Mullins’ wedding reception in 2012.

AMY GOODMAN: Though the case pitted claims of religious freedom against the fight for gay rights, the ruling stopped short of setting a major precedent on whether businesses can deny people services because of their sexual orientation.

How significant is this ruling? And let’s not forget, the newest justice, Neil Gorsuch, comes from Colorado.

RIA TABACCO MAR: That’s right, Amy. Well, obviously, the decision is deeply disappointing for our clients, Dave and Charlie, as well as Charlie’s mother Debbie, who was with them there that day and hoped to help her son select his wedding cake, and, of course, the experience ended up being very different.

But let’s be clear: This was not the win the bakery had asked for, or the Trump administration, which had backed the bakery in the case. You know, as Juan indicated, the court reversed based on peculiar facts in the history of the Civil Rights Commission’s handling of this case. Those facts aren’t likely to be repeated anytime soon. And in the process, the court recognized that Colorado can and should act to prevent the harms of discrimination in the marketplace, including when it comes to LGBT people.

JUAN GONZÁLEZ: And is that, perhaps, why two of the liberal justices of the court voted with the majority on this case? Do you have any sense on those particular justices?

RIA TABACCO MAR: Well, so, Justice Kagan and Justice Breyer joined the—Justice Kennedy’s majority opinion for the court. And Justice Kagan wrote separately to add some clarification, but it’s clear that the majority of the court thought that what happened here, as I mentioned, was peculiar. They weren’t happy with the Civil Rights Commission’s handling of the case, but they all agreed that those issues were specific to the facts of this case. There was no need to reach the broader questions and, again, hand the bakery the broad victory it had asked for. Remember, the baker here was asking for a constitutional right to discriminate, based not only the freedom of religion and the freedom of speech. The court didn’t engage with that claim at all.

AMY GOODMAN: So, explain what happened that day, when the family went in to order a cake for their same-sex wedding, and, just in non-legalese, why it was this is so narrow that you’re actually not deeply concerned about this. I mean, clearly, Sonia Sotomayor and Ruth Bader Ginsburg were concerned.

RIA TABACCO MAR: Well, I think Justice Sotomayor and Ginsburg were concerned about the very real harm that our clients experienced. And so, to your question, Amy, back in 2012, Dave and Charlie were planning their wedding. Remember, this is before the Obergefell decision. They could not yet legally marry in Colorado. So they were planning a ceremony in Massachusetts, reception back home in Denver. Charlie’s mom was planning to be in town for a work trip, and so they waited until she could be there to go to the cakeshop to select their wedding cake. And almost as soon as they walked in the door, they’re turned away and told, you know, “We won’t do cakes for same-sex weddings,” without any discussion of what they might have been seeking to order. That, of course, is devastating. And the family left. They retreated to the car. They broke down in tears. Charlie turned to his mother for comfort. And those are the very real harms that I think really motivated Justices Sotomayor and Ginsburg to dissent.

AMY GOODMAN: But the ruling, why it is not as significant as people feared?

RIA TABACCO MAR: So, the bakery here had claimed that the freedom of religion or the freedom of speech essentially give them a blank check to violate Colorado’s Anti-Discrimination Act and discriminate against people based on sexual orientation. It’s worth noting that argument, if accepted, would not have been limited to discrimination against LGBT people and could have implicated many of the other characteristics protected under Colorado law, including race, religion and disability. And the court didn’t go that far. Instead, it said it had concerns about the way the Civil Rights Commission had handled this particular case. But in the process of doing that, it repeatedly underscored the significance of laws like Colorado’s Anti-Discrimination Act, which have a long and storied history, dating in this case to 1885, the Reconstruction era. So you see the majority really understood the significance of laws like these to our ability to participate freely in the marketplace. And the court today said the same is true when it comes to people who are LGBT.

AMY GOODMAN: Well, I want to thank you so much for being with us, Ria Tabacco Mar, senior staff attorney with the ACLU, the counsel of record for Charlie Craig and David Mullins in Masterpiece Cakeshop v. Colorado Civil Rights Commission.

Tune in Wednesday, tomorrow, for our special on Puerto Rico. The hour will be spent with Naomi Klein, Elizabeth Yeampierre and Katia Avilés-Vázquez. Juan González and I will be interviewing them.

Democracy Now! is accepting applications for our paid video production fellowships. Find out more at democracynow.org. 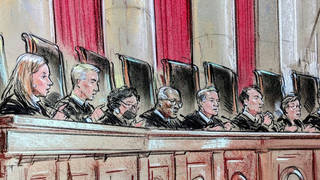