Supreme Court Justice Ruth Bader Ginsburg recently missed oral arguments as she continues to recover after having two tumors removed from her lung last month. But the Supreme Court has said she is cancer-free and that the 85-year-old, now three-time cancer-surviving justice, has been reviewing arguments and weighing in on cases from home. Meanwhile, the documentary ”RBG” about her life has been nominated for an Academy Award. At the Sundance Film Festival, we speak with Julie Cohen, one of the film’s directors.

StoryJan 31, 2019Tessa Thompson & Time’s Up Call on Hollywood to Work with More Women Directors in #4PercentChallenge

JULIE COHEN: I’m Julie Cohen, and I’m one of the directors and producers of the Academy Award-nominated documentary RBG.

AMY GOODMAN: So, congratulations on the Academy Award. You broke the news to RBG, to Ruth Bader Ginsburg?

JULIE COHEN: Yes, that’s correct. The justice’s office patched myself and my directing partner Betsy West into Justice Ginsburg’s home, where she’s recovering from her surgery from two cancerous nodules being removed on her lung, on the morning that the Oscar nominations were announced. The justice’s office patched us through to her home, and we got to break the news to her. It was terrific. She was quite enthusiastic. It’s hard to not seem—to be immodest, but she did say she felt that the nomination was eminently well deserved.

But really, the better news than that, for us personally, was just hearing her voice for the first time since her surgery. She sounded really chipper and cheerful and really strong. When we told her how nice it was to hear her voice sounding great, she, you know, said she’s very eager to get back to work. And I think, you know, she’s been working from home, as has been reported, on—you know, a lot of what the court does is reading briefs and reading transcripts of oral arguments and, you know, sort of starting to make thoughts about rulings on various cases. So, she’s been doing all of that from her home in Washington.

AMY GOODMAN: As you so profoundly illustrated in your film about RBG’s life, about Justice Ruth Bader Ginsburg’s life, she has not missed an oral argument in more than a quarter of a century. So, she is doing this from her recovery bed. Word was, the White House, that Trump was already entertaining names to replace her. But what’s the next time the Supreme Court comes together? And do you expect her to be there?

JULIE COHEN: Well, I should say, as a result of her surgery, she did miss two weeks of oral argument for the first time, for the first time ever, in January, as her doctors wisely advised her. She needs to take care of recovering from the surgery and getting back to work. The great news was that both scans and pathology showed no further evidence of cancer, so it’s a question of recovering from the surgery at this point. And the court hears oral arguments again on February 19th. So, that’s a few more weeks away, and that’s why she’s trying to—as she works from home, also trying to rest and recover, to hopefully be back on the bench for those arguments.

AMY GOODMAN: So, what about that news that President Trump was already entertaining names to nominate for her seat?

JULIE COHEN: Yeah, well, you know, I mean, I think it would be—on the one hand, it certainly makes sense for a White House to be prepared for who their Supreme Court picks would be, whatever the circumstances are on the court. I think as far as anyone trying to get that out in the world, or, you know, the pretty massive rumors going on online and the Fox News mistake of putting up a graphic suggesting that she had died last week—

AMY GOODMAN: Can you explain that?

JULIE COHEN: As far as all that stuff—well, last Monday, just as part of a story that they were doing, when the on-air talent was talking about Justice Ginsburg, they just put up a graphic slate that said her name and said the years as if she died. They immediately apologized. It was a mistake in the control room. I take Fox News at their word for that. But what then happened on the crazy, you know, online Twittersphere is that everyone started to spread that around as rumors. And, you know, I’m extremely happy to say, having spoken to Justice Ginsburg the day after that, that she’s alive and well and sounding strong.

AMY GOODMAN: And that news of her demise was greatly exaggerated?

AMY GOODMAN: So, talk about RBG for a moment. We’ve had you on the show discussing this film. But what she represents on the court and what she has worked so hard on, why she’s so important.

JULIE COHEN: You know, I think RBG has represented a number of things throughout her life. She’s represented the obstacles that women face in getting their footing in the professional world, and all of the forces that work against them and how important it is to fight those forces.

She has represented, as a lawyer, the importance of fighting for equal rights under the U.S. Constitution for men and women. And she herself became really the prime voice making that argument in the U.S. Supreme Court. And the beauty of that fight is that it’s a fight that she made huge progress on.

In more modern days, she’s come to represent—in certain cases, as the court has become more conservative, she often represents a voice of dissent on the court, writing dissenting opinions on a number of issues, including reproductive rights, women’s rights and voting rights, for that matter, that have really, I’d say, resonated around the country, not just with lawyers and judges, but also with activists and with regular people who are concerned about those issues.

AMY GOODMAN: Julie Cohen, let’s talk, though, about the Oscar nomination for RBG. You are breaking ground in so many ways—this obviously trailblazing woman, Supreme Court justice, the film is about, but also you, as a women-led team. How unusual is this, both in the documentary section and overall?

JULIE COHEN: Well, we are certainly very proud that the—all of the lead faces and voices and brains on the RBG documentary team were women: myself and Betsy, the directors and producers of the film, as well as our executives at CNN Films and our director of photography, our editor, our composer—and I could go on—you know, just a women-led creative and executive team. That’s pretty unusual either in docs or narratives.

There’s been a fair amount of talk in the movie business in recent years about the underrepresentation of women behind the camera. That’s been particularly true in the narrative sphere, and it’s true again this year in the best picture nominees, that some of the great women directorial voices, such as Debra Granik, who did Leave No Trace, that actually premiered here at Sundance last year; Chloé Zhao, the director of The Rider, a really beautiful film; Marielle Heller from Can You Ever Forgive Me?, that they didn’t get director nominations. Often, even in the case of Marielle Heller, her film had, I believe, two acting nominations, and the best supporting actor nominee Richard E. Grant made the great point, like, you know, “My great performance in that film didn’t just drop from the sky; there was a great director behind it. And it happened to be a woman.” Hopefully, you know, as women become more common in all works—on all walks of the film business, you’ll see more women’s work getting recognized.

AMY GOODMAN: Julie Cohen, co-director of the Oscar-nominated documentary RBG. From the Sundance Film Festival in Park City, Utah, I’m Amy Goodman. Thanks so much for joining us. 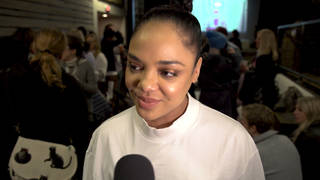