Burma’s de facto leader Aung San Suu Kyi has asked the U.N. International Court of Justice to drop the genocide case against Myanmar, formerly Burma. Suu Kyi is a Nobel Peace Prize winner who spent over a decade fighting against the Burmese military, which she is now defending. Last week, Suu Kyi appeared in person at the court to dispute the charges and called the allegations of genocide against Rohingya Muslims “incomplete and misleading.” The Burmese military killed and raped thousands of Rohingya and forced more than 700,000 to flee into neighboring Bangladesh in a brutal army crackdown in 2017. Gambia brought the genocide case to the International Court, accusing Burma of trying to “destroy the Rohingya as a group, in whole or in part, by the use of mass murder, rape and other forms of sexual violence.” In Barcelona, Spain, we speak with Reed Brody, a counsel and spokesperson for Human Rights Watch. He is also helping Gambian victims seeking to prosecute the former dictator Yahya Jammeh.

StoryFeb 03, 2021A Coup in Burma: Did Military Seize Power to Avoid ICC Prosecution for Rohingya Genocide?

AMY GOODMAN: This is Democracy Now! I’m Amy Goodman, as we turn to The Hague, where Burma’s de facto leader Aung San Suu Kyi has asked the U.N. International Court of Justice to drop the genocide case against her country. The Burmese military killed and raped thousands of Rohingya and forced more than 700,000 to flee into neighboring Bangladesh in a brutal army crackdown in 2017. International aid groups say thousands of Rohingya have been murdered, a quarter of a million have been forced to flee into Bangladesh. But Aung San Suu Kyi, the Nobel Peace laureate who spent over a decade fighting against the Burmese military, is now defending it. Last week, she appeared in person at The Hague to dispute the charges and called the allegations of genocide against Rohingya Muslims “incomplete and misleading.”

AUNG SAN SUU KYI: Myanmar requests the court to remove the case from its list; in the alternative, to reject the request for the indication of provisional measures submitted by the Gambia. … Mr. President, it is vital for Myanmar’s present and future that our civilian and military criminal justice systems functions in accordance with the Constitution. Where a country has a military justice system, neutralizing the system by externalizing justice, in effect, surgically removes a critical limb from the body, the limb that helps armed forces to self-correct, to improve, to better perform their functions within the constitutional order.

AMY GOODMAN: During the International Court hearings, Aung San Suu Kyi repeatedly tried to deny the Burmese military has carried out genocide against the Muslim Rohingya, although she never once used that word, “Rohingya,” during her speeches. Gambia brought the genocide case to the International Court, accusing Burma of trying to, quote, “destroy the Rohingya as a group, in whole or in part, by the use of mass murder, rape and other forms of sexual violence,” unquote.

Welcome back to Democracy Now!, Reed. Can you talk about the significance of Aung San Suu Kyi, the de facto leader of Burma, saying that the genocide against the Rohingya — others call it the Rohingya — did not take place?

REED BRODY: Well, you know, this was a spectacular moment for international justice, with the eyes of the world live — the case live-streamed to Myanmar, to the Rohingyas, around the world. You had Gambia laying out the case that the government of Myanmar was committing genocide. And Aung San Suu Kyi, the de facto leader, was there listening and participating. Obviously, you know, she went there for domestic political reasons, to show that she was in solidarity with the military, who continue to rule, in many ways, the country, in solidarity with those majorities in the country who hate and despise the Rohingyas and have mistreated them, not just for the last couple of years, but for many years.

But, you know, it’s a spectacular fall from grace for a woman who was a Nobel Peace Prize winner, an icon of the human rights movement, now to be sitting there, standing there, forcefully defending her government, a government which, as you said, has displaced over a million Rohingyas, that has committed systematic rape and the destruction of villages. And to have this transmitted all over the world, again, I don’t think — you know, from an international point of view, this was a disaster for her. I mean, if somebody is accusing you of a crime — of genocide, no less — usually you want to run away from those charges, hide them. By going to The Hague for domestic reasons, she guaranteed that the world would be watching, that the cameras of the world would be focused on these very accusations.

AMY GOODMAN: So, Aung San Suu Kyi goes to The Hague. The case was brought by Gambia. Explain why Gambia.

REED BRODY: Well, it’s a fascinating story, actually. The Organization of Islamic Cooperation, a 57-member group of Islamic countries, have obviously been concerned about the treatment, the crimes against the Rohingyas. And they created an ad hoc group to look at different legal recourses. And the attorney general of the Gambia was at a meeting of the OIC in Bangladesh. He went to the border. Now, this is a man, Abubacarr Tambadou, who I work with very closely on Gambian issues, who had been a prosecutor himself at the Rwanda war crimes tribunal, who had prosecuted cases of genocide. He said, “When I went to” — and, in fact, he told the court, “When I went to the border, I saw genocide. I smelled the stench of genocide.” And so, when the Muslim cooperation agencies were looking for what to do, he actually proposed this course and proposed that Gambia would take this case to the International Court of Justice.

And, you know, within Gambia, there’s a lot of — I mean, Gambia is going through, as we’ve talked on your show, a very painful process of accounting for its own past abuses of its own dictatorship. And a lot of people in Gambia are, “Well, why are we — you know, why? What do we have to do with that, 7,000 kilometers, 5,000 miles away from the Gambia?” But I think the attorney general has made the point that, you know, it’s precisely a country like Gambia, a democratic country dealing with its own issues — and that is the kind of solidarity, Amy, that we don’t very often see these days: a country, small African country, standing up for the rights of a persecuted minority, you know, 5,000 miles away.

AMY GOODMAN: Reed Brody, I want to thank you so much for being with us. Just give us the chronology of what happens next. Two days of hearings. When does the International Criminal Court decide?

REED BRODY: Well, the hearings were on the Gambia’s request for the equivalent of an injunction. And the bar is very high. This is a very conservative court, made up largely of former government officials. They don’t like to interfere in national affairs. The quote that you played from Aung San Suu Kyi played exactly to that. So, Gambia is asking for the equivalent of an injunction. We are assuming, given the urgency and given the eyes of the world on this case, that the court will rule on that request for provisional measures within the next month.

AMY GOODMAN: We want to thank you so much, Reed Brody, counsel and spokesperson for Human Rights Watch.

This is Democracy Now! When we come back, a historic Presidential Forum on Education. Stay with us. 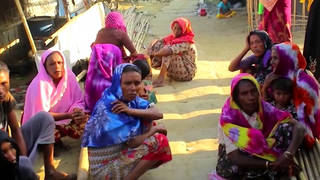