A federal judge in San Francisco has temporarily blocked President Trump’s plan to bar nearly all migrants from seeking asylum in the United States. In his ruling, U.S. District Judge Jon Tigar of California ordered Trump to continue accepting asylum claims, issuing a preliminary injunction against a rule that would block anyone who passes through a third country before arriving in the U.S. from applying for asylum. The rule would effectively stop people from Honduras, El Salvador and Guatemala from seeking refuge in the United States. The preliminary injunction came just hours after a federal judge in Washington, D.C., let the new asylum rule stand in a separate challenge. We speak with Baher Azmy, legal director of the Center for Constitutional Rights, which challenged the Trump policy, alongside the ACLU and the Southern Poverty Law Center.

AMY GOODMAN: This is Democracy Now! I’m Amy Goodman. A federal judge in San Francisco has temporarily blocked President Trump’s plan to bar nearly all migrants from seeking asylum in the United States. In his ruling, U.S. District Judge Jon Tigar of California ordered Trump to continue accepting asylum claims, issuing a preliminary injunction against a rule that would block anyone who passes through a third country before arriving in the United States from applying for asylum. The rule would effectively stop people from Honduras, El Salvador and Guatemala from seeking refuge in the United States.

In his ruling, the judge highlighted the difficulties asylum seekers faced in third countries, like Mexico, and said applying for asylum while in Mexico did not appear to be a feasible alternative. Judge Tigar also said, quote, “Under our laws, the right to determine whether a particular group of applicants is categorically barred from eligibility for asylum is conferred on Congress,” he said. The preliminary injunction came just hours after a federal judge in Washington, D.C., let the new asylum rule stand in a separate challenge.

Well, for more, we’re joined in our New York studio by Baher Azmy. He is legal director at Center for Constitutional Rights, which challenged the Trump policy alongside the ACLU and the Southern Poverty Law Center.

It’s great to be with you again, Baher. Explain what happened. This is a real victory for you and for migrants.

BAHER AZMY: Yeah. I mean, this is among the most draconian and dangerous attacks on our asylum system and, in addition, asylum seekers to date. And what the judge recognized is, Congress has thought long and hard about how to manage our southern border and the asylum process, and has ensured that individuals are entitled to access the asylum process and can only be denied if they have really strong connections to third countries, not merely transiting through.

So, you can be barred only in two limited circumstances: one, if someone has, quote, “firmly resettled in a third country”—emphasis on “firmly”—that is, they’ve spent a long time in a country, have had status and have all sorts of indicia of safety, like housing and employment, not merely touching foot in a third country; or where we have what are called safe third country agreements—and we only have one, with Canada—which turn on equally robust asylum systems in both countries. And in that situation, say, a victim of persecution from Egypt, who happened to pass through Canada on his way to the United States, could be returned to Canada, but not to Egypt. But what the Trump administration would do here is send any migrant from Guatemala, Honduras or El Salvador back to their persecutors, when they happen to transit through Mexico.

AMY GOODMAN: So, talk about the significance of what the Trump administration announced just this week. I mean, we’re now talking about massive shifts in policy.

BAHER AZMY: Yeah, this is a relentless attack on the very idea of asylum. And I think it reflects, as someone else has said this, a desire to inflict cruelty and dehumanization and degradation, and to sort of muscularly show that these people, Latin Americans primarily, are not entitled to any rights that this country is bound to respect.

And I think it actually speaks to a deeper phenomenon here, which is largely a rejection of the entire post-World War II human rights consensus, this idea that we are part of a multinational system that’s bound to respect the rights of vulnerable people, or the idea that rights belong to individual humans as opposed to turning on citizenship in a strong state. And I think they just simply reject the very idea of human rights.

AMY GOODMAN: I want to turn right now to a clip of a Honduran father with his young son, who hoped to apply for asylum in the U.S., instead were forced to stay in Mexico.

MELVIN GARCÍA: [translated] They gave us Mexican papers, but we don’t have anyone here to guide us, to help us. We don’t really know Ciudad Juárez. We don’t know what it’s going to be like here. The United States didn’t want to give us asylum or anything. They throw us in the streets. And Mexico? Mexico is supposedly helping us, but things are getting worse because we don’t have any way to pick ourselves up. … I’ve been traveling with my son as a migrant for a month and a half. We came by bus, on foot and catching rides in cars that pick us up. And the situation has been really difficult.

AMY GOODMAN: So, that’s Melvin García describing his very difficult situation. And you have Judge Tigar grilling the Justice Department attorney Scott Stewart about the lack of protection for asylum seekers in Mexico and Guatemala, countries likely to be transited through on the way to the U.S. Talk about all of this.

BAHER AZMY: Yeah. I think that the administration’s stated justification for the rule, among other things, is, “Well, Mexico can handle these asylum seekers.” But the evidence and the record was very obvious, and we all know that Mexico can’t. You know, multiple human rights organizations that spend time in Mexico and other countries recognize that they don’t have the systems to process asylum seekers, and they routinely turn people back to their home countries. So, you know, the point of relying on Mexico in this way is to maximize cruelty and to deter anyone, or attempt to deter people, from fleeing their desperate conditions, which they haven’t been successful on because, in fact, the conditions are so horrific that people are—

AMY GOODMAN: So, what’s going to happen right now? You have one judge in Washington who says, “Yes, we can move forward.” You have Judge Tigar saying no.

BAHER AZMY: Right. So, Judge Tigar issued a nationwide injunction. His ruling prevails. And there will be further proceedings in the appellate courts in both cases. And it may ultimately wind up in the Supreme Court.

BAHER AZMY: The “remain in Mexico” policy is another really cruel policy, that says even if you—once you enter the United States, if you can make it into the United States, and make an application for asylum, while your petition is being adjudicated, go back to Mexico and wait in really dangerous conditions on the other side of the border.

AMY GOODMAN: And then you have this astounding story about Guatemala, President Trump wanting to sign this third-party agreement with Guatemala. The country, Guatemala, would take migrants who try to get into the United States, from anywhere in the world, and would send them to Guatemala. The president, Morales, wanted to sign it, but the Guatemalan judges and the country of Guatemala—there was an uproar last week.

AMY GOODMAN: And they said no, and so Morales wasn’t allowed to come—Morales didn’t come to Washington to sign the agreement. And now Trump is trying to viciously go after the whole country.

BAHER AZMY: Oh, it’s absurd. It’s punitive. It’s reflexive. It’s irrational. And, right, the idea that an underresourced country like Guatemala could manage a migration crisis, when Guatemala itself has a humanitarian crisis that’s causing its citizens to flee, is absurd. But again, the cruelty and punishment is the point.

AMY GOODMAN: Well, I want to thank you so much, Baher Azmy, for joining us, Baher Azmy, legal director of the Center for Constitutional Rights. He directs all litigation and advocacy around issues related to the promotion of civil and human rights.

When we come back, China is rushing to build boarding schools for children, Muslim children from the Uyghur community, who are deliberately removed from their families, as well as from their language and culture. Stay with us. 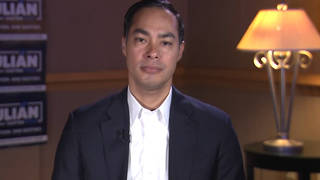